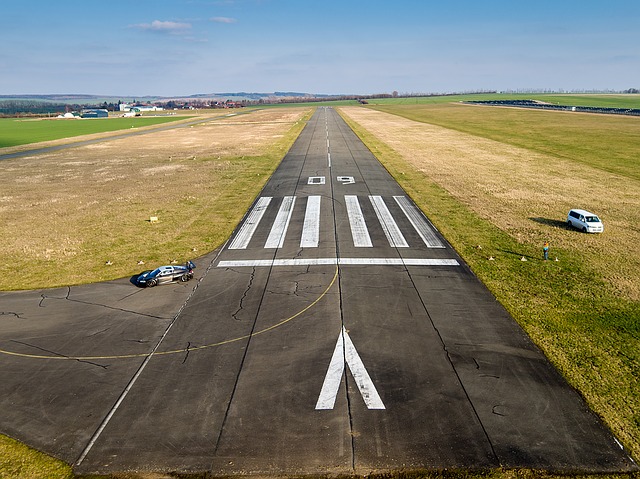 The construction of runways is similar to that of roads in that the type of pavement required depends on the loads needing to be carried, although the stresses applied by aircraft can be very high and variable, up to 8 times greater than those on roads.

Pavements must facilitate safe aircraft ground operations, and in order to achieve this they must meet a number of performance requirements:

Airfield pavements are designed to carry aircraft within certain one of two classifications, determined by the intensity of loads and stresses.

This is used for UK military airfields. Each aircraft type is assigned a Load classification number (LCN) on a scale of 1 to 120. This reflects its relative effect on pavements and takes into account the weight of the aircraft as well as the specification of the undercarriage wheels. The LCN values are divided into seven Load classification groups (LCG) depending on their load-carrying capacity.

The relative loading severity of an aircraft on a pavement is expressed by one of 16 different values given to the aircraft, the Aircraft classification number (ACN). These represent the maximum and empty operating weights on rigid and flexible pavements for each of four different subgrade strengths.

The Pavement classification number (PCN) is used in combination with the ACN to indicate the strength the airfield pavement. It is recorded as a five-part code which corresponds to:

Rigid pavements are commonly used for runway and taxiway junctions, aprons and hard-standings, and may be either reinforced or unreinforced pavement quality concrete (PQC). PQC is concrete that will provide a minimum flexural strength of 3.5 MN/m2 or more when the pavement is in use.

Composite pavements can also be used. Similar to road pavements, these consist of continuously reinforced concrete with a bituminous topping. The bitumen surface is usually asphalt and must have high stability and smooth-riding qualities.

Flexible pavements may be economical when used for light aircraft but otherwise will tend not to be appropriate.

Joints in concrete pavements are similar to those for concrete roads, although in a continuously reinforced slab there are no transverse joints. The reinforcement is lapped or welded to provide continuity.

Runways must have excellent drainage capabilities as aircraft can aquaplane if there is just a thin film of water on the surface. The usual cross falls on the runway are 1 in 66. Cross falls on runway shoulders may be increased to 1 in 40. Gullies or drainage channels should also be provided.

On areas subject to fuel spillage, drainage should be channeled to a fuel and oil interceptor so that the water course is not polluted and to reduce the risk of fire. A single open trap located near the drainage outfall is usually provided.

Retrieved from "https://www.designingbuildings.co.uk/wiki/Runway_construction"
Create an article