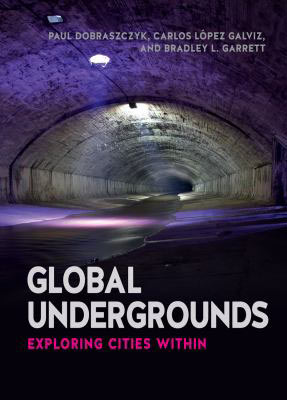 Tipped as a ‘bunker-Baedeker’ this book takes the reader on to a journey through the cities below our cities, looking at a variety of often forbidden underground structures from tunnels to bunkers, sewers and caverns.

The book starts with a historic outlook at the famous Cloaca Maxima, Rome’s ancient sewer and the Chinese terracotta army that joined their dead emperor in his underground funerary complex.

It looks at the ways humans have created underground spaces by making use of existing caves and digging tunnels.

The authors investigate our fascination with the unknown below and its almost magical character; one only needs to look at the catacombs of Paris and the neatly arranged bones of the long-dead, but also the cathedral like vaults of modern underground railway systems.

Underground spaces have, and continue to serve as shelters during wars, help us travel from place to place peer into the past, and even prepare for our future, through facilities like CERN and the Svalbard Seed Vaults.

Illustrated with stunning photographs this book of case studies makes a fascinating read for everyone interested in the urban subterranean.

This article was originally published here by ICE on 22 June 2017. It was written by Annette Ruehlmann.

Retrieved from "https://www.designingbuildings.co.uk/wiki/Global_undergrounds_-_exploring_cities_within"
Create an article