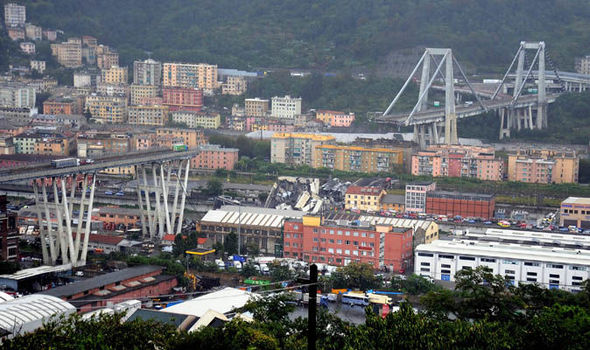 On 14th August 2018, the Morandi motorway bridge in Genoa, Italy, collapsed during a torrential rainstorm. The death toll is thought to be 43, with several more injured, and a rescue operation comprising several hundred firefighters trying to locate people still thought to be missing. More than 400 people have been evacuated from the area.

Prime Minister Giuseppe Conte declared a state of emergency in the Liguria region, and a national day of mourning will take place during the funerals of the victims.

The bridge was nearly 1.2 km long and carried the A10 motorway high above the city. It was inaugurated in 1967 and was an important route for goods from local ports serving the Italian Riviera and the southeast coast of France.

The bridge, which incorporated concrete-encased stay cables, was subject to restructuring works in 2016 and was undergoing maintenance work to strengthen the road foundations at the time of the collapse. A 200 m-long section failed, along with a 90 m concrete A-frame. The collapse caused around 40 vehicles to fall 45 m.

While the reason for the collapse is unclear, some experts have described the bridge, the work of civil engineer Riccardo Morandi, as a very unusual design. In 2016, Antonio Brencich, a professor specialising in reinforced concrete construction at the University of Genoa, described the bridge span as “a failure of engineering”, saying; “...that bridge is wrong. Sooner or later it will have to be replaced. I do not know when. But there will be a time when the cost of maintenance will be higher than a replacement.”

Ian Firth, a former president of the Institution of Structural Engineers and a specialist in bridges, said; “As this reinforced and prestressed concrete bridge has been there for 50 years, it is possible that corrosion of tendons or reinforcement may be a contributory factor. In addition, ongoing work on the bridge may or may not be partly responsible for the collapse.” (Ref. https://www.theguardian.com/world/2018/aug/14/unusual-span-of-collapsed-genoa-bridge-had-seen-frequent-repair-work)

The Italian government quickly blamed Autostrade, the operator of the bridge, moving to strip its concession and calling for resignations. In 2011, Autostrade warned that; “queues of cars and the volume of traffic provoke intense degradation of the bridge structure on a daily basis in rush hour, as it is subject to major demands”. Transport Minister Danilo Toninelli said; “I have given mandate to my ministry to start all proceedings ... to revoke the concession from these companies and seek significant sanctions”. Meanwhile, the Genoa Public Prosecutor’s Office has opened an investigation into the possibility of negligent homicide.

On 17 August, Giuseppe Conte announced that the government had; "...formally sent to Autostrade per l'Italia the letter of complaint which launches the process for revoking the concession", stating that they had failed in their obligation to look after the ordinary and extraordinary maintenance of the motorway, a charge which Autostrade strongly deny.

The collapse calls into question the condition of much of Italy’s infrastructure. Settimo Martinello, director of 4EMME Service, which carries out checks on 50,000 bridges in Italy told CNN; "All Italian bridges made of concrete between the 1950s and 1960s have come to the end of their life... While a collapse like the one in Genoa is quite rare, there are about 15 to 20 bridges collapsing every year in the country".

The safety of two other Morandi bridges has also been questioned, the Wadi Al-Kuf in Libya, which was closed in 2017 when inspections found potential cracks, and the General Rafael Urdaneta bridge in Venezuela.

Later in August 2018, the architect Renzo Piano told the Observer magazine that he had offered to 'donate' a bridge design to replace the Morandi bridge. Piano, who was born in Genoa, said he had been deeply affected by the tragedy and that, while it was premature to discuss design particulars, the new bridge must be both a memorial and an embodiment of a "positive moment of unity and cooperation".

Piano said: "One thing for sure is that it must be beautiful – not in the sense of cosmetics but in conveying a message of truth and pride. It must be a place where people can recognise the tragedy in some way, while also providing a great entrance to the city. All this must be done without any sign of rhetoric – that would be the worst trap. But I think we will stay away [from that] and instead try to express real pride and values. That is what Genoa deserves."

The first span of a new bridge was lifted into place on 1 October 2019.

In February 2020 it was reported that construction of the last of 18, forty-metre-high concrete piers for the new bridge had been completed.

In December 2020, it was reported that the Inquiry into the bridge collapse highlighted poor maintenance and design flaws in the construction as likely causes. Ref https://www.rfi.fr/en/europe/20201226-inquiry-into-genoa-bridge-collapse-highlights-poor-maintenance-design-flaws

Retrieved from "https://www.designingbuildings.co.uk/wiki/Genoa_bridge_collapse"
Create an article