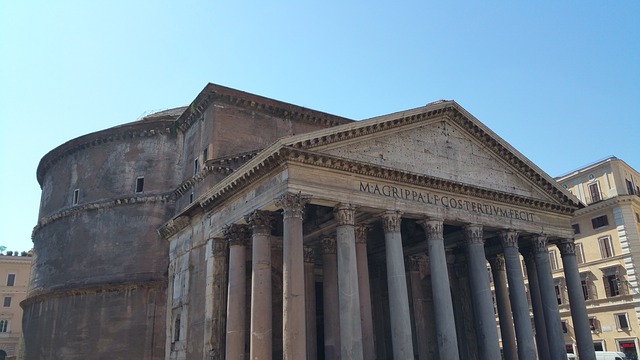 In classical architecture, a portico is a colonnaded porch leading to a building’s entrance, or a covered walkway which is enclosed by walls and supported by regularly-spaced columns.

Porticos were a widely-adopted feature of temple architecture in Ancient Greece and were subsequently adopted in many other cultures, particularly Roman architecture.

There are two general types of portico in plan form.

The first is where a temple’s walls extend beyond the cella (inner chamber) and form side walls of the porch or anteroom. Generally, these long walls would terminate with antas (corner post or pilaster). The portico, or open end of the porch, is supported by between 1 and 4 columns in antis (between the antas).

The second is where a temple terminates with a porch, open at the front but also at the sides. The temple is referred to as ‘prostyle’, with freestanding columns across the entire portico. The different types of temple are referred to as:

The terminology for porticos dependent on the number of columns they have is:

The city with the most porticos is Bologna in northern Italy, where they are part of a UNESCO World Heritage site. Most of the city’s porticos were constructed from timber until a city ordinance in 1567 decreed that ‘wooden pillars be replaced by brick or stone’.

Bologna also boasts the world’s longest portico, stretching approximately 2 miles (3.5 km) from the edge of the city to the Sanctuary of the Madonna di San Luca. With 666 arches it represents civic mindedness, built by contributions from Bologna’s citizens.

Retrieved from "https://www.designingbuildings.co.uk/wiki/Portico"
Create an article