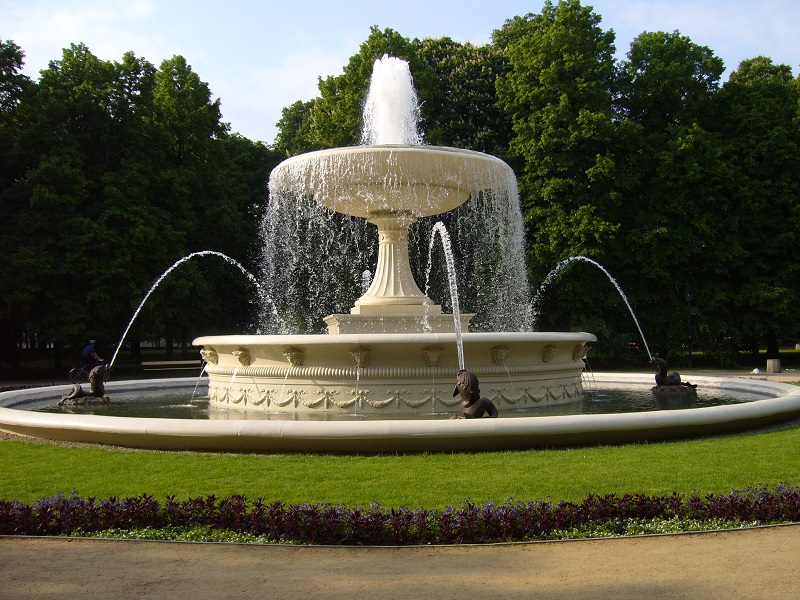 The earliest fountains, in Ancient Rome, were functional and used for providing water for drinking and washing. For a water flow to be consistent it required a source (e.g. reservoir or aqueduct) that was higher than the fountain and so was reliant on gravity.

By the end of the 19th century, fountains had been replaced as the main source of drinking water by domestic plumbing and so became primarily decorative. At around this time, gravity was replaced by mechanical pumps which enabled fountains to recycle water and project it into the air. At the start of the 20th century, fountains began to adopt steam pumps and then later on electric pumps to receive water from the source.

Modern fountains rely on a closed recirculating system to recycle water. An electric pump is used to provide the power to push water through the pipes. The pump is typically submerged in the water reservoir and consists of a spinning impellor to draw water in and force it out by centrifugal force. The most appropriate pumping rate will need to be found as the fountain can splash and waste water if it is set too high and will not circulate at all if it is set too low.

Water is delivered to the fountain head and then sprayed into the air through a nozzle or left to flow outside the fountain. In both cases the water will fall back onto the fountain and drain back into the reservoir. Larger fountains will often be fitted with multiple nozzles and pumps.

A filter known as a media filter, is used to remove particles from the water as it is circulated. It is fitted with its own pump and plumbing to take water from the pool to the filter and back to the pool. The water can be cleaned using treatments such as chlorination or anti-algal methods.

A ‘plant room’ is provided to store the pumps, filter, electrical switch box and plumbing controls, and this must be well-constructed so as not to leak and create a hazard. Fountains can often use low-voltage lighting, often submerged in the water, which minimises hazards.

Water in a fountain is gradually lost due to evaporation so it must be topped up at certain times, and allowances made to be able to cope with overflow after heavy rain.

Some notable fountains include:

Retrieved from "https://www.designingbuildings.co.uk/wiki/Fountain"
Create an article