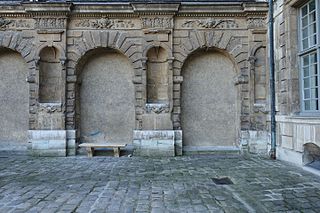 A blind arcade is a series of blind arches that are filled-in instead of being left open as with traditional arcades. Rather than having a load-bearing function, a blind arcade is often included in masonry facades as an ornamental element, with well-defined columns.

Blind arcades are common decorative features in Romanesque and Gothic architecture throughout Europe, as well as being found in Byzantine Orthodox and Armenian churches.

Retrieved from "https://www.designingbuildings.co.uk/wiki/Blind_arcade"
Create an article