In the main arena, hosted by the BBC’s Arts Editor, Will Gompertz, the first conference session was on the subject of whether the London Mayor’s affordable housing requirements are the best way to tackle the housing crisis.

Jules Pipe, Deputy Mayor, Planning Regeneration and Skills for the Greater London Authority, asserted that the Mayor was still aiming for 50% affordable homes on all new developments. He said that policies being examined included embedding the requirement for affordable homes into land values, and speeding up developments that fit the correct criteria.

Pipe stated that the London Living Rent had been calculated based on a maximum of £60,000 household income.

Ben Derbyshire, Chair, HTA Design and RIBA President-Elect, said the RIBA membership is supportive of the Mayor’s approach, adding that they had grown uneasy at the way previous policies had effectively attacked designers’ ability to create mixed neighbourhoods, with urban regeneration coming to represent little more to some than social cleansing.

Susan Emmett, Director, Residential research for Savills, said there is always a market context to any policy idea. She gave voice to concerns that a slower market and more onerous requirements on developers could slow investment, as landowners decide not to bring housing projects forward, but to look instead at other, more profitable land uses.

This point was reinforced by Jennie Daly, Director for Land and Planning, Taylor Wimpey, who reminded the audience that housebuilders only recover their investment when they sell housing units. While she welcomed the Mayor’s introduction of a more detailed approach to viability, she said that an overly prescriptive policy background could create a ‘momentum gap’. 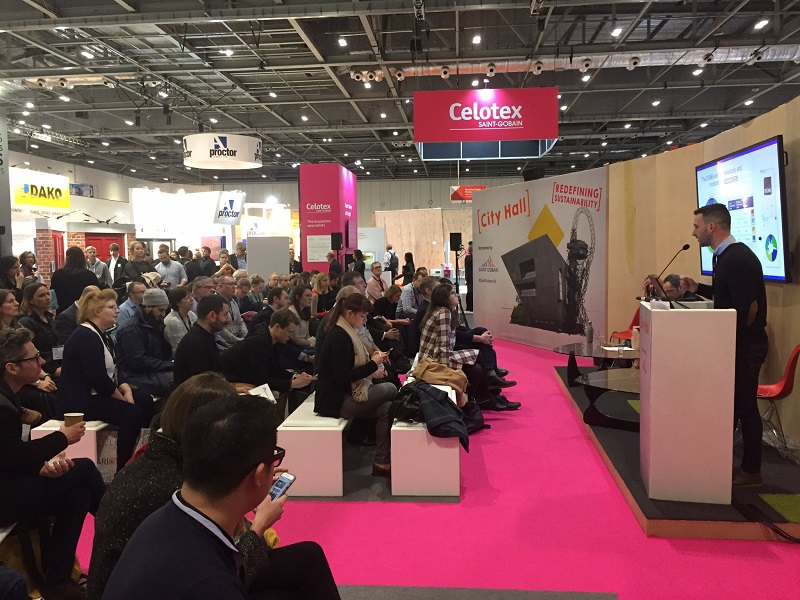 There was discussion about the work of Lendlease, who have launched an initiative to ‘send employees [of their clients] home healthier than when they arrived.’ Lendlease have implemented mental health first aiders, employee screenings for cancer and other physical health, as well as collecting and analysing data from employees’ FitBits to monitor recovery from stress, sleep patterns, and so on.

They are also one of the first employers to introduce ‘wellness leave’, encouraging employees to take time out to do something related to their wellbeing, such as family time, catching up on personal admin, cookery courses, yoga sessions, etc.

Tomas Neeson, Managing Partner, Cundall, spoke about the work his firm has done on the fit-out of UK-GBC’s London headquarters, where 90% of the materials were reused and repurposed, and air quality levels have been significantly improved. He said the aim should be to achieve buildings that make people healthier and have a positive environmental impact.

Carl Potter, Senior Director, GVA, argued that the emphasis should be on how the internet of things can be made to cater for building users’ needs. He said the longevity of technology needs to be looked at, as a means of tackling the increasing future obsolescence of buildings, and ensuring the industry understands that the value created is actually of value to the occupier.

Properly understanding the needs of the people using and occupying the workplaces was also discussed by Lindsey Malcolm, Environmental Team Leader, XCO2, who said the driver now was to get away from homogenised workplace units (the cubicle culture), and to move towards something more geared to the individual worker; giving them the choice between how, where and when they want to work.

He gave an example of an 8-person office in Taipei which doubles as someone’s apartment after the working day. He claimed that fully-flexible office spaces could, if done well, be used over a full 24-hour day, and could be easily-scalable, allowing offices to be community centres, gyms, bars, hotels, and so on.

Retrieved from "https://www.designingbuildings.co.uk/wiki/Ecobuild_2017"
Create an article