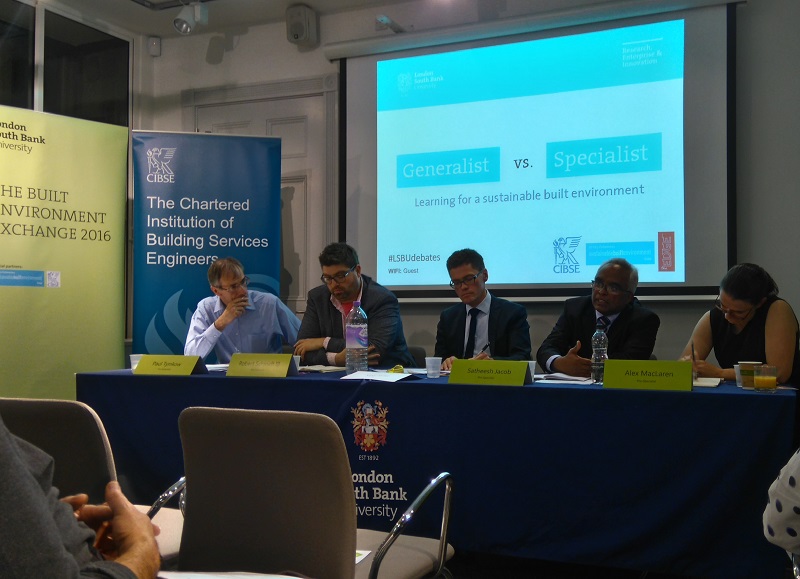 On 15 November 2016, Designing Buildings Wiki attended a debate considering what sort of education is best for tackling the challenges of sustainability in the built environment – ‘generalist’ or ‘specialist’? Is it more beneficial to have the deep and narrow knowledge that comes with the specialisation of disciplines or the shallow and broad knowledge that comes from general cross-disciplinary learning?

The chair Nigel Tonks, Buildings London Leader for Arup, introduced the debate, explaining how in his professional career he had witnessed the emergence of evermore specialist disciplines. Project meeting tables that 15-20 years ago would have had the core professionals (architect, engineer, quantity surveyor, and so on) sat around them, can now include 30 or more professionals of various disciplines.

Arguing on ‘Team Generalist’, Paul Tymkow, Director of Learning and Knowledge at Hoare Lea, began by saying that generalists are able to see things from all angles, communicate from wider perspectives and rise above inter-disciplinary concerns.

He cited the example of building services engineers forever bemoaning the lack of adequate testing time. If others could see this testing is essential, they would champion it as well as their own field of expertise and the project as a whole would benefit as a result.

In terms of education, he took the view that there should be more encouragement towards CPD. This may, he said, lead to a rethinking of traditional role boundaries, and indeed all disciplines are currently in motion. The key question is how do we re-educate and rethink disciplines to be successful at what we want to achieve?

On the side of ‘Team Specialist’, Alex MacLaren, Assistant Professor at Heriot Watt University, attacked the over-used buzzword of the ‘T-shaped professional’ to illustrate a depth of specialist knowledge with a breadth of superficial knowledge. She suggested attitude is key, rather than knowledge, and that everyone needs to be technical, specialist and with the right attitude to collaborate with others.

She also warned of the dangers exponential possibilities of technology such as Google Analytics and Big Data can pose by citing Alexander Pope’s ‘a little knowledge is a dangerous thing’. A small error at the broad, superficial level could have hugely dangerous ramifications for a project. She also said that as the modern workforce works longer, further training and education will play an important role in specialising to greater depths.

On ‘Team Generalist’, Robert Schmidt III, senior lecturer at Loughborough University, extolled the virtues of the American education system as being more generalist, with more manoeuvrability that allows students to avoid getting stuck on a particular trajectory. He argued that real problems don’t exist in silos but are cross-discipline, with the challenge being for people to synthesise between environments and fields. Depth alone, he said, is equally as dangerous as a little knowledge.

He also presented the memorable ‘well-rounded man’ quote from Robert Heinlein that concludes ‘…specialisation is for insects’.

Continuing the argument, Satheesh Jacob, Head of Excellence for Ramboll, said that when dealing with a topic, it is necessary to understand the seriousness of it, and that if faced with a serious health issue, for example, you would want to see a specialist rather than a General Practitioner.

He said that it was time sustainability was treated as a serious profession, with specialists who have the right collaborative attitude. He argued that a lot of what stymies innovation is the obsession with process and trying to relate through BIM and other means.

Retrieved from "https://www.designingbuildings.co.uk/wiki/Generalist_vs_Specialist_learning_-_debate"
Create an article