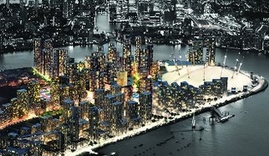 A masterplan is a framework within which a location is encouraged to develop or change.

Great provinces and historic cities are often held up as prime examples of masterplanning, however current masterplanning practice is a relatively recent development. It faces a number of different challenges to historic masterplanning:

There is a developing consensus about how to approach masterplanning, but it has not yet become a standard process with common language, clearly understood objectives and known outcomes. The outline process described in this article is the result of an ongoing dialogue between an urban designer and an engineer; it aims to begin the process of establishing a shared language and framework for the process of masterplanning.

There are two key types of masterplan:

Although the application of the masterplan varies greatly depending on the scale of land under consideration and the nature of the change required, a number of basic principles are common to the process. These are expressed here as a series of questions which the masterplanning team should ask:

[edit] Who is the client?

This can be an elusive concept where there is an extended project team, but it is important to establish a decision-making hierarchy as soon as possible.

[edit] What work has the client done to support the masterplan?

Sometimes clients may have carried out extensive consultation, options appraisals, business planning as well as traffic, land use and infrastructure surveys before commissioning a masterplanning exercise. Others clients may have done nothing beyond owning the land, and this tends to mean that their requirement is only pecuniary.

[edit] What are the key drivers for change?

The key drivers that have brought about the need for a masterplan might include:

[edit] Has a business case been prepared?

Historically in the UK, some strategic masterplans have been let down by the lack of a coherent and workable business case. It has been estimated that 95% of all masterplans fail to some extent because of a lack of business planning in undertaking the masterplan.

The business case should consider what might happen if nothing was done, as well as assessing the need for and likely consequences of change. It also needs to take on board issues beyond the boundaries of the masterplanning site such as:

[edit] What is the narrative of the masterplan?

People inhabit spaces and engage with their surroundings in complex ways which go beyond the purely physical and vary depending on age, sex, social class, race, religion, economic status and even general outlook. It is important therefore to understand the context of a masterplan in social and narrative terms as well as in relation to physical and economic outcomes.

For example, what would be the outcome if the language used to describe a place was changed? A powerful re-branding exercise kicked off Glasgow's move from being a low-status city to winner of European City of Culture. The narrative of a place can be assessed through carefully planned stakeholder engagement and a comprehensive consultation process.

Change to the fabric of the space can only begin once the narrative for the masterplan has been established. Changing how a place is described by users affects how they feel about it. If a narrative has not been established and endorsed by users, physical changes proposed by the masterplan may not be well received and may not produce the anticipated outcomes. When Ferguslie Park, near Glasgow was redeveloped in the 1990s, some local inhabitants rejected the changes and vandalised the new developments. The masterplanning process had failed to engage with their views and wishes.

[edit] What are the physical changes required?

Assessing the need for physical changes begins with creating a drawn and descriptive appraisal of the masterplanning area:

[edit] What is the masterplan solution?

The masterplanning process could be considered part of the teasing out of the key elements in the development of the first brief. By the time a masterplan has developed to a planning application, most key decisions have been made.

Up until that point, the purpose of the masterplanning process is to encourage creative thinking, to test out of how these ideas might work in practice; developing a robust logic to underpin the scheme:

The outcome might be a policy document, a planning application or construction. It is essential to continue consultation with all stakeholders during this process. The final outcome should embody the societal values that underpin it and should include economic, cultural and social values.

This article was written by Andrew Comer from --Buro Happold and Steven Smith from urban narrative.

Retrieved from "https://www.designingbuildings.co.uk/wiki/Masterplanning"
Create an article