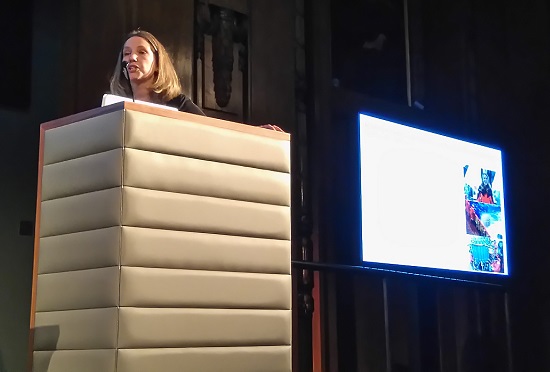 On 17th March 2016, Designing Buildings Wiki attended the 2016 Happold Foundation Lecture ‘Climate change: Been there, seen that, proved it?’

Held at the Institution of Engineering and Technology (IET) in Savoy Place, the lecture was intended to stimulate the engineering community to engage with and influence planning and decision-making about climate change, mitigation and adaptation.

The lecture was given by Dr Emily Shuckburgh, Deputy Head of the Polar Oceans division for the British Antarctic Survey, who talked through her personal experience of climate change, the long-term projections and what she felt the implications would be at a local level.

Taking the audience through several, sometimes familiar, graphs highlighting the severe consequences of continued carbon emissions, Shuckburgh revealed that the scientific community is considering whether the dramatic changes seen since the 1950’s have signaled the start of new geological epoch, the ‘anthropocene’.

For any doubters in the audience, Shuckburgh pointed to the facts that very hot summers in Europe have increased in frequency from a ‘natural’ rate of 1 in 1000 years to the current rate of 1 in 5 years; that flood damage now costs the UK £16bn per year; and that the accelerating level of glacier retreat in West Antarctica may result in sea levels rising to up to 1 metre by the end of the century.

On a more positive, note, she pointed to the Paris COP15 agreement as a resounding success compared to previous attempts to create a global consensus, but that ‘aggressive mitigation’ would be necessary, above and beyond the measures agreed in Paris, to keep emission rates down to less than 2°C. The urgency was such, she suggested, that we have only 30 years of emissions at the current rate left if we are to have any chance of keeping temperature rises below 2°C.

There is also cause for some optimism. She pointed to early indications that emissions may have started to plateau, and that they appear to be decoupling from GDP.

She concluded by saying that engineers stand in a position of opportunity, with the potential to embrace new technologies and engage in finding solutions. There would, she said, be no single answer, but rather a whole suite of technologies and actions would be required, and she called on the audience to throw the proverbial kitchen sink at the problem.

Following the lecture a panel of experts debated the issues and took questions from the audience.

Duncan Price of BuroHappold Engineering began by emphasising that it was essential that the UK decarbonise its existing building stock, due to 47% of carbon emissions being generated or influenced by the construction industry.

Professor Paul Jowitt of Heriot Watt University argued that the UK had no real right to complain about the size of China and India’s carbon footprint since its own footprint has largely been outsourced to them. He also lamented the persistence of high profile climate skeptics, saying that Presidential-contender Donald Trump’s likely response to rising sea levels would be to “buy a bigger boat”.

Professor Bill Gething of the University of the West of England called fuel poverty a “red herring”, saying that the problem was that energy “doesn’t matter currently, it’s too cheap and too available.” He went on to make the point that real action on climate change would only come when “we are all in real fuel poverty to some extent or other”.

In response to Designing Building Wiki’s question about what action the UK Government is taking, given that it recently scrapped zero carbon homes and the Green Deal, and reduced support for renewables. Baroness Worthington of the Environmental Defense Fund Europe, defended the Government’s record as “adopting a different set of priorities”, namely wind, nuclear and replacing coal with gas. She said that the Government was still “pandering to extreme right wing views but [was] still committed to tackling climate change.”

Simultaneously though, across London at a GuardianLive debate, former Labour leader Ed Miliband said that the many cuts to green policies enacted since the Conservatives came to power were “deeply, deeply disappointing” and the government had felt “far too able to do the wrong things on climate change”.

On the subject of what the new London Mayor should priortise – buildings or transport – the panel were unanimous in selecting the latter as the main concern, and lamented Boris Johnson’s poor record on tackling the air quality of the capital.

On the issue of who the clients were that might invest in decarbonising buildings, Duncan Price highlighted the efforts of housing associations, many of whom have buildings that are double or triple-A efficiency rated, compared to the private rental sector that had much ground to make up.

There was also panel unanimity on the inevitable question of whether the UK would be able to tackle carbon emissions better, or at all, in the event of leaving the EU. Bill Gething pointed out that the EU is the only real driver of emissions targets and policy; with Baroness Worthington claiming it would be “complete madness to suggest we would be better if we left.”

But Dr Shuckburgh had the final say with the consideration that from a scientific research point-of-view there have and continue to be many grants and investments made by Europe to explore and study places such as the Arctic that would not have been possible on a country-level.

Retrieved from "https://www.designingbuildings.co.uk/wiki/Happold_lecture_on_climate_change"
Create an article