Housing associations are independent, not-for-profit organisations that provide social housing for those in need. They are also known as ‘registered social landlords’ or ‘private registered providers of social housing’.

They provide houses for rent and sometimes offer shared-ownership schemes. They are required to be registered with Homes England and are represented by the National Housing Federation (NHF).

The overall responsibility for housing associations falls either to a voluntary committee, board of management or paid non-executive individuals.

The typical activities of a housing association are funded by the income from their rented properties.

Homes England provide funding for new affordable housing and improvements to existing social housing. They also act as regulators for the housing associations throughout England, other than in London where the responsibility lies with the Greater London Authority (GLA).

Housing associations provide homes to people on low incomes or in need of extra help. They provide approximately two and a half million rented homes in England (ref. NHF, 2014). It is possible to apply for homes either:

Houses are offered to those who most suit the property, and the rates of rent are fixed by the government.

Shared ownership schemes are offered by housing associations including:

[edit] Right to acquire/right to buy

The 1996 Housing Act introduced the Right to Acquire. This is a statutory right for housing association tenants to acquire their homes at a discounted price from the open market value. The right is applied to eligible tenants living in eligible properties. A tenant can buy their home with a joint tenant or with up to 3 family members who have lived in that property for the past 12 months.

In September 2015, the NHF proposed an alternative voluntary scheme for housing associations, which communities secretary Greg Clark accepted, on the condition that the sector agree the proposals within a week of the announcement. Agreement was confirmed in David Cameron's speech to the Conservative Party conference in October 2015. See Right to buy extended to housing association tenants for more information.

Individuals’ who may require help to live independently are supported by housing associations. For example:

Temporary accommodation for individuals in need can be provided by housing associations. They may lease additional homes from private landlords in urgent cases, particularly for families. 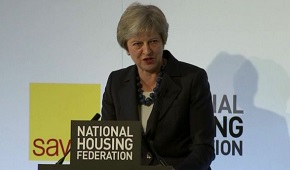 In September 2018, in a speech at the National Housing Federation Summit, Prime Minister Theresa May affirmed the "central role" of housing associations and announced £2 billion funding for new affordable and social housing.

As well as setting out the steps that government has taken to date, including providing long-term certainty on rents and agreeing not to extend the local housing allowance cap to the social sector, the announcement of new funding was intended to give housing associations more long-term certainty, stretching ahead to 2028/29. However, critics raised the point that the funding will only be available from 2022.

But she called on housing associations to step up their output, saying, "rather than simply acquiring a proportion of the properties commercial developers build, I want to see housing associations taking on and leading major developments themselves. Because creating the kind of large-scale, high-quality developments this country needs requires a special kind of leadership – leadership you are uniquely well-placed to provide."

May also stated her commitment to change the way social housing is viewed, both by tenants and wider society. She said:

"For many people, a certain stigma still clings to social housing. Some residents feel marginalised and overlooked, and are ashamed to share the fact that their home belongs to a housing association or local authority. And on the outside, many people in society – including too many politicians – continue to look down on social housing and, by extension, the people who call it their home …We should never see social housing as something that need simply be 'good enough', nor think that the people who live in it should be grateful for their safety net and expect no better."

Retrieved from "https://www.designingbuildings.co.uk/wiki/Housing_associations"
Create an article

Getting serious about mental health