On 5 October 2015, the then-Chancellor George Osborne announced the creation of a National Infrastructure Commission that would begin work immediately (ref. Gov.uk Chancellor announces major plan to get Britain building).

The National Infrastructure Commission (NIC), was to be chaired by Lord Andrew Adonis, a Labour peer, and overseen by a small board appointed by the Chancellor. Lord Adonis resigned the Labour whip in the House of Lords to chair the Commission, sitting instead as a cross-bench peer to maintain an independent status. The NIC was expected to have around 25-30 permanent staff, and to have statutory powers to allow it to draw on the expertise of regulators and national delivery bodies.

It was is intended to provide an unbiased analysis of the UK's long-term infrastructure needs, delivering a long-term assessment and plan early in each parliament. It was expected to report every five years, looking 30 years ahead and to examine the evidence across sectors including; energy, roads, rail transport, ports and airports, water supply, waste, flood defences, digital and broadband, and how this investment could support housing development.

The government would be obliged to respond to its recommendations, either accepting them or setting out how they would develop alternatives.

Initially the NIC was expected to focus on:

Osborne said: “The Commission will calmly and dispassionately assess the future infrastructure needs of the country and it will hold any government's feet to the fire if it fails to deliver.”

“Without big improvements to its transport and energy systems, Britain will grind to a halt. I look forward to establishing the National Infrastructure Commission as an independent body able to advise government and Parliament on priorities. Major infrastructure projects like Crossrail and major new power stations span governments and parliaments. I hope it will be possible to forge a wide measure of agreement, across society and politics, on key infrastructure requirements for the next 20 to 30 years and the assessments which have underpinned them.

At a formal launch event on 30 October 2015, the membership of the 8-person NIC was confirmed as:

The creation of the NIC was broadly welcomed by the industry, but concerns were expressed about how competing needs would be managed (ref. Construction Manager Magazine, 6 October).

On 7 January 2016, NIC announced a consultation on the governance, structure and operation of the commission. Lord Adonis, said, "We need to improve the way we plan and deliver major infrastructure projects in this country. This consultation sets out how a strong and independent National Infrastructure Commission can do exactly that." The consultation ran for 10 weeks, closing on Thursday 17 March 2016.

On 29 February 2016, the CBI published a report 'Plotting the course', in which it called for the NIC to be 'given teeth' and identified eight key areas that should be prioritised, including; delivering a low-carbon energy supply, preparing for the roll-out of 5G, factoring in climate change when planning water supplies and flood defences, and devising creative solutions to meet the growing demand on roads, rails and ports.

The Queen's speech on 18 May 2016 suggested that the introduction of a Neighbourhood Planning and Infrastructure Bill would give a statutory basis to the NIC (up to that point, working under interim provisions) via primary legislation, meaning that it would be mandatory for the government to respond to recommendations from the commission.

On 26 May 2016, the Commission launched a further consultation Seeking views on the process and methodology of the National Infrastructure Assessment. The consultation closed on 5 August 2016.

A spokesperson for the NIC said, “What matters is that the Commission is established in a way that firmly secures its independence, provides the powers that it needs to do its job and places clear obligations on government to respond to its recommendations in a timely fashion. How this is done is a matter for government. But if the Commission is to succeed in its work it will be essential to get it right, and we look forward to seeing the government’s new proposals as soon as possible.”

In October 2016, speaking at the Conservative Party Conference, Chancellor Philip Hammond said "... I recommit to putting the Commission at the very heart of our plans to renew and expand Britain’s infrastructure”, but it was unclear what this reassurance actually meant..

Following this, on 10 October 2016, the Confederation of British Industry, the British Chambers of Commerce, London First and the Infrastructure Forum Advisory Council wrote an open letter to Hammond calling for the NIC to be made a statutory body.

However, on 12 October 2016, Hammond announced that the NIC would become an executive agency, with its own budget, freedom and autonomy, and with with Sir John Armitt agreeing to be interim Deputy Chair. An open competition will be held to find the commission’s first permanent Chair and new additional commissioners to boost the team and take forward its work.

The announcement was accompanied by publication of:

However, Head of External Affairs at the Civil Engineering Contractors Association, Marie-Claude Hemming said: “If the NIC is to be truly independent of government and have the powers it needs to do its work, it must have a basis in law.”

At the end of October 2016, the NIC put out a further call for evidence setting out 28 questions in relation to the National Infrastructure Assessment. It also established a Technical Panel and an Analytical Panel.

On 24 January 2017, the NIC was formally established as an executive agency of the Treasury, and a corporate plan was published.

The objectives of the NIC are described in the corporate plan as:

The corporate plan, lists NIC’s core responsibilities as the production of:

The first National Infrastructure Assessment is due to be published in spring 2018.

You can read the corporate plan here.

In April 2017, it was confirmed that Lord Adonis would remain chair and Sir John Armitt would remain deputy chair on a permanent basis.

However, on 29 December 2017, Lord Adonis announced that he was resigning as chair as a protest over Prime Minister Theresa May's management of Brexit, calling her "the voice of UKIP".

He said that he was stepping down because of "...fundamental differences – on infrastructure and beyond – which simply can’t be bridged". He claimed he would have had to resign regardless of his feelings about Brexit, because of the Transport Secretary Chris Grayling's "...indefensible decision to bail out the Stagecoach/Virgin East Coast rail franchise."

Referring to the bailout in his resignation letter, Adonis said; "The bailout will cost taxpayers hundreds of millions of pounds, possibly billions if other loss-making rail companies demand equal treatment. It benefits only the billionaire owners of these companies and their shareholders, while pushing rail fares still higher and threatening national infrastructure investment."

In January 2018, It was announced that Sir John Armitt, past president of the Institution of Civil Engineers had been appointed chair of the NIC. Armitt has been the deputy chair of the NIC since it was established in 2015.

Chancellor Philip Hammond said: “Sir John Armitt brings years of experience of UK infrastructure. With him at the helm, I am confident we will develop a strategic and ambitious infrastructure plan that supports economic growth for decades to come.”

In February 2018, NIC published its first annual monitoring report, which highlighted a number of large infrastructure projects that are at risk of falling behind, with progress needing to speed up as 'a matter of urgency'.

The report suggested that the government had failed to produce definitive plans for transport connectivity in the North, and that delays would occur if further reviews of Crossrail 2 went ahead. The longer it takes for government to come to a decision, they warned, the greater the risk of more money being needed on top of the £80m already provided.

The NIC called on the government to set out clear timetables and funding proposals for Crossrail 2 and Northern Powerhouse Rail in the next 10 months.

The first National Infrastructure Assessment was published on 10 July 2018, setting out recommendations for improving the country’s infrastructure network up to 2050. It suggested there is a ‘golden opportunity’ to provide low-carbon energy to homes and businesses without increasing bills, but called for Ministers to act now. 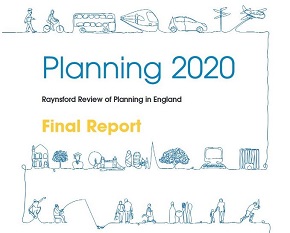 In November 2018, the former housing minister Lord Raynsford recommended that the NIC should be given statutory powers as part of an effort to overhaul England's planning system.

Raynsford's report, published by the Town and Country Planning Association (TCPA) 'Planning 2020: Raynsford Review of Planning in England - Final report' states; 'Business and developers complain about slow and bureaucratic processes, an opaque system, and a consequent lack of certainty. Communities complain that their concerns are overlooked and their interests are subordinated to other priorities. Many councillors feel powerless to deliver what they believe their communities need. Many professional planners feel trapped in a process-driven treadmill, rather than being able to develop visionary solutions to their area’s needs. Many individuals are confused or overwhelmed by the complexity of the processes involved.'

The report makes 24 recommendations covering both national and local planning. It suggests that placing the NIC on a statutory footing would make it responsible for managing long-term strategy to guide sustainable development, and set out strategic advice where special planning arrangements might be needed.

In addition, the review recommends a new legal duty to deliver sustainable development, and proposes that the government should restrict developments that allow commercial buildings to be converted to housing units without proper safeguards relating to quality.

On 22 February 2019, the NIC publushed its Annual Monitoring Report, urging Ministers not to “take their eye off the ball”, and to go even further and faster to help meet the country’s needs. Ref https://www.nic.org.uk/news/government-action-can-ensure-uk-benefits-from-world-class-infrastructure/

In February 2020, the National Infrastructure Commission’s Annual Monitoring Report 2020 was published assessing the Government's progress against the Commission's recommendations. https://www.nic.org.uk/wp-content/uploads/NIC-2020-AMR-Final.pdf

The National Infrastructure Strategy, published in November 2020 announced that the government had identified new priorities for the NIC for 2021, and has commissioned a new study on greenhouse gas removal technologies which will report in summer 2021.

In April 2021 the Institution of Civil Engineers launched a consultation questioning the effectiveness of the NIC. Ref https://ice.org.uk/news-and-insight/policy/post-national-infra-strategy-review-consultation

Retrieved from "https://www.designingbuildings.co.uk/wiki/National_Infrastructure_Commission_NIC"
Create an article