Industrial Strategy: building a Britain fit for the future

On 27 November 2017, Business Secretary Greg Clark MP unveiled the government white paper; ‘Industrial Strategy: building a Britain fit for the future’. This followed consultation on 'Building our Industrial Strategy' green paper published in January 2017, and came less than a week after the Autumn Budget 2017. 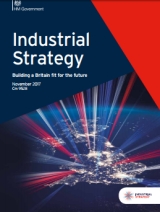 The white paper sets out ‘…a long term plan to boost the productivity and earning power of people throughout the UK’, aiming to make the UK the world’s most innovative nation by 2030. It focuses on five foundations of productivity:

Each foundation is supported by policies intended to give business the certainty and reassurance that the UK will continue to have a competitive edge.

The white paper creates four ‘sector deals’, for; construction, life sciences, the automotive industry and artificial intelligence. These are strategic, long-term partnerships with government, backed by private sector co-investment. It also identifies four ‘Grand Challenges’ that represent an invitation to engage with the government to innovate and develop new technologies in; artificial intelligence, clean growth, ageing society and future of mobility.

In relation to infrastructure, the white paper sets out plans to:

The 'places' foundation includes creating plans to create a new 'transforming cities' fund that will provide £1.7 billion for intra-city transport.

The 'people' foundation includes a new National Retraining Scheme supporting people to re-skill, beginning with a £64m investment for digital and construction training.

However, the rather vague construction sector deal itself, which is intended to transform the productivity of the sector, only offers a commitment to work collaboratively in three areas:

The government suggests this will be the first of a series of deals with the sector.

An Independent Industrial Strategy Council will be launched in 2018 to make recommendations to government on how it measures the success of the strategy.

“The way we earn and live our lives as workers, citizens and consumers is being transformed by new technologies. The UK is well-placed to benefit from this new industrial revolution and we start from a position of significant strength....The Industrial Strategy is an unashamedly ambitious vision for the future of our country, laying out how we tackle our productivity challenge, earn our way in the future, and improve living standards across the country.”

“Our modern Industrial Strategy will shape a stronger and fairer economy for decades to come. It will help create the conditions where successful businesses can emerge and grow, and support these businesses in seizing the big opportunities of our time, such as artificial intelligence and big data, whilst also making sure our young people have the skills to take on the high-paid, high-skilled jobs this creates.”

“A key part of securing long-term economic growth and increased productivity will be to invest in our infrastructure network – so I welcome that today’s Industrial Strategy has this at its heart. It is significant that the strategy has a clear focus on developing new low-carbon technologies, but also that the first sector deals are in construction as we deliver major projects like HS2, and artificial intelligence technology which could transform how we operate and maintain our infrastructure. These will be key considerations as we work to deliver the country’s first-ever National Infrastructure Assessment to tackle the 3 Cs of congestion, capacity and carbon for the country’s long-term economic benefit.”

“Today’s commitment to a construction sector deal, coupled with the £170m announced in last week’s budget to increase productivity in the construction, is fantastic news for the whole sector. It demonstrates the strength of partnership we have developed with the government and Build UK looks forward to working with the CLC and others to develop an effective and efficient industry capable of delivering the much needed infrastructure and housing across the UK.”

“When combined with the recent Autumn Budget announcement regarding the government moving towards a presumption of using modern methods of construction for many of its programmes, this represents the single biggest and coordinated set of measures attacking construction industry modernisation since the publication of the Farmer Review last year.”

“The newly announced sector deal for construction will be crucial for the whole supply chain over the coming years, especially if we are to help government achieve its aims of building more homes and improving the UK’s infrastructure."

Retrieved from "https://www.designingbuildings.co.uk/wiki/Industrial_Strategy:_building_a_Britain_fit_for_the_future"
Create an article