In July 2013, the Government published: Construction 2025, Industrial Strategy: government and industry in partnership, setting out its long-term vision for ‘…how industry and Government will work together to put Britain at the forefront of global construction…’ 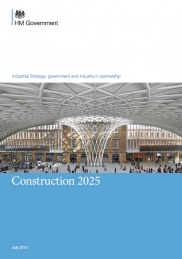 The construction industry is seen as crucial to the long-term success of the UK economy as it includes more than 280,000 businesses and accounts for 3 million jobs (10% of total UK employment) (ref. BIS analysis of Labour Force Survey micro-data).

The report builds on some of the themes raised in the Latham report and Egan report, and the strategies set out the in the 2011 Government Construction Strategy, which called for ‘...a profound change in the relationship between public authorities and the construction industry to ensure the Government consistently gets a good deal and the country gets the social and economic infrastructure it needs for the long-term…'

Construction 2025 is described by Sir David Higgins, Chief Executive, Network Rail as ‘the first step in putting UK construction at the forefront of the global market.’

It rather ambitiously proposes:

NB: In 2011, the Government Construction Strategy stated an intention to reduce costs by 20% by the end of the parliament (subsequently rephrased as 15-20%).

Construction 2025 sets out five key components to the long-term vision for the industry:

It then makes the following commitments:

An action plan is set out in Annex B of the report that will continue to be updated and supplemented as the strategy is taken forward. However, the plan is a little vague in terms of detail and is described as ‘tactical rather than strategic’.

Coming so soon after the Government Construction Strategy, and proposing such ambitious targets, there is some scepticism that the vision is achievable. There have been a great number of reports about the construction industry, and numerous attempts to improve efficiency. Despite this, the perception persists that the industry is wasteful. It might be inferred from this either that; under the circumstances the industry operates more effectively than it appears from the outside; expectations are unrealistic; or recommendations have been consistently poorly implemented.

At the September 2015 Construction Industry Summit, Chief construction adviser Peter Hansford, announced that a new government construction strategy for 2015-20 would be published in the following months. Construction Manager Magazine suggested that the strategy would map the route to Level 3 BIM and Digital Built Britain, and focus the industry on improving diversity.

NB: The government's commitment to the objectives set out in Construction 2025 was re-affirmed in a statement about the Construction sector deal made by Business Secretary Greg Clark on 29 November 2017.

In July 2020, The Construction Index reported that the industry had failed in its target to reduce the balance of trade deficit in building materials and components, and that, in fact, ONS figures revealed that the trade deficit had not halved but had widened from £6bn to more than £10bn. It went on to state in relation to the other Construction 2025 targets: "Of these specific goals, only the emissions target currently seems achievable. And it might be interesting to know to what extent that is the result of CLC actions and to what extent it is the result of legislation emanating from Brussels." Ref https://www.theconstructionindex.co.uk/news/view/uk-flops-in-quest-for-construction-2025-trade-targets

Is anyone else of the opinion that the Construction 2025 report is similar to the rubbish we have been reading in previous reports?

If all of the savings projected in all the reports had actually been delivered, construction would now be free. There is a list of similar reports all the way back to 1934 at Construction Industry Reports.

They all say similar things, but fail to resolve the contradiction between making substantial savings in construction costs whilst also delivering whole-life value. Whole life value requires recognition of the fact that the cost of construction is tiny compared to the cost of running a business through the life of a building - ie short term savings may run against long term interests.

The list of government reports reciting all the ways in which the construction industry is wasteful and inefficient is long and old. Seeing as the government very rarely gets a good deal from public sector construction, perhaps it would be best to revise the incentives behind these projects, since there is no client other than the taxpayers, who will socialise the financial loss of any lack of productivity or delays, with no power to pull out and withdraw investment.

If efficiency, waste reduction and value-for-money is what the government is after, perhaps it should concede more of its functions to private enterprises, who would not be able to finance themselves indefinitely in a coercive way.