Fragmentation of the UK construction industry 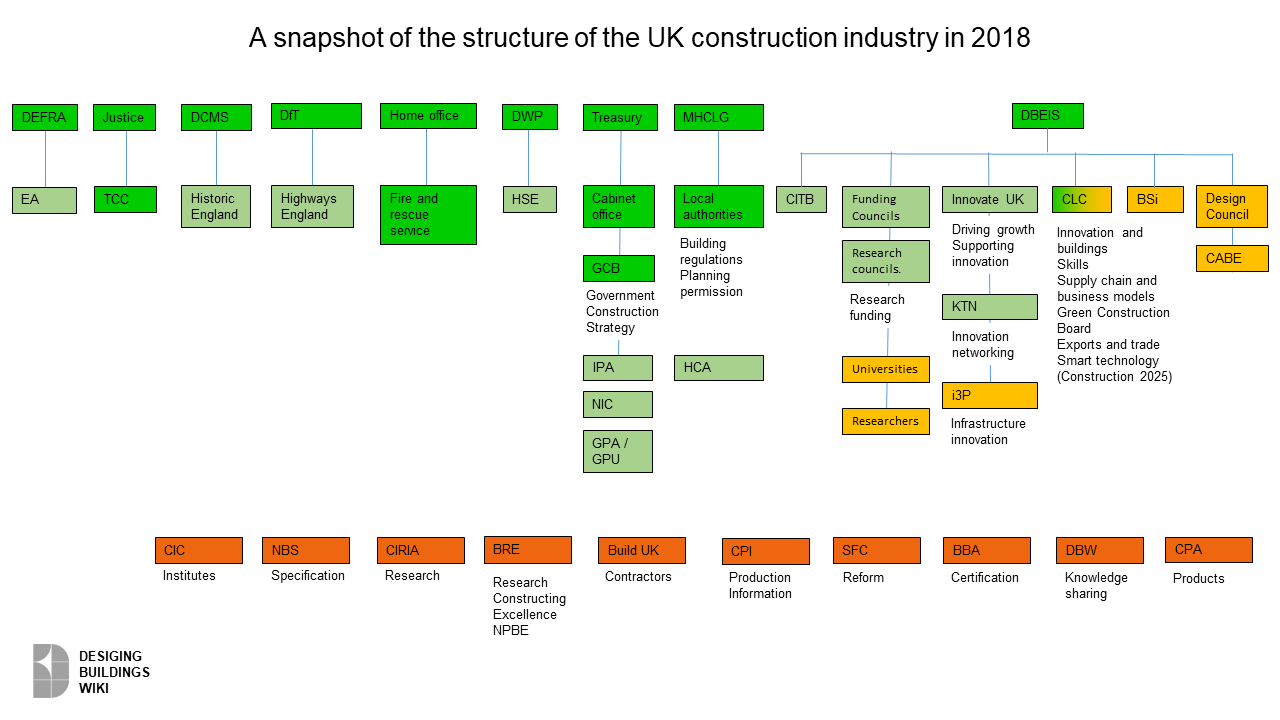 The UK construction industry has always been complex and diverse, and the modern industry, with it's separation of design and construction has to some extent always been fragmented. But despite the development of the ‘design and build’ procurement route, integrated project teams and the introduction of collaborative practices, there is strong evidence that industry fragmentation has become progressively worse since the 1950s. This is thought to contribute to poor performance, low investment, poor skills and a lack of innovation.

This was recognised as early as the Ministry of Works 'Survey of Problems before the Construction Industries' (the Emmerson Report) published in 1962, but most notably it was highlighted in Sir Michael Latham’s 1994 report 'Constructing the Team', which notoriously described the industry as ‘ineffective’, ‘adversarial’, ‘fragmented’ and ‘incapable of delivering for its customers’.

One of the reasons for the fragmentation of the industry is that buildings have become more complicated.

Britain emerged from the Second World War with a construction industry dominated by very large contractors that had grown from war time work and were rebuilding a country ravaged by the Blitz. Wimpey were the biggest of these contractors, directly employing most of the labour necessary to execute its projects. Taylor Woodrow, even with half the annual turnover of Wimpey, employed 40,000 people.

Today however, as buildings have become more complex, it is less and less likely that any one contractor will have the required skills to carry out all of the works necessary to construct them, and it does not make good commercial sense to take on new employees for one project that would then have to be laid off for the next. Increasingly therefore, contractors use sub-contractors to carry out particular elements of the works.

On a straight-forward 'traditional' project, design consultants and the main contractor, sometimes referred to as tier 1 suppliers, work for the employer, and the main contractor may have a limited chain of their own suppliers. However, the situation becomes more complicated on large projects, where the employer may have a significant number of tier 1 suppliers, all with complex and extended supply chains of their own, some of whom may be completely unknown to the employer at the top of the chain.

A report published by EC Harris in 2013 suggested that for a large building project in the £20 - £25 million range, the main contractor may be directly managing around 70 sub-contracts of which a large proportion had a relatively low value of £50,000 or less [1].

Construction 2025, published in 2013 also pointed to a high degree of fragmentation, even when compared to other sectors or to countries such as the USA, France and Germany. This, it has been suggested, is because the UK has a higher level of sub-contracting [2] driven, in part by the relatively high proportion of self-employment and a high number of small and micro businesses [3].

The Government Construction Strategy 2016 2020 (published in 2016) reported that the industry was dominated by a staggering 956,000 SMEs, which accounted for 99% of businesses.

However, Construction 2025 suggested that the industry’s customer base was even more fragmented, with much of the industry’s workload coming to it on a one-off, piecemeal basis. This was also referenced by the Government Construction Strategy 2011 2015 (published in May 2011) which pointed to a particular fragmentation of the public sector client base.

Government oversight of the construction industry is spread across a large number of departments, with no clear single point of responsibility. For example, the Department for Business Innovation and Skills (BIS) is responsible for Construction 2025, but HM Treasury is responsible for the Government Construction Strategy. In 2007/8, the Building Research Establishment (BRE) reportedly characterised the number of public sector bodies with an interest in construction as 'a completely fragmented mess' [4].

There was an attempt to tackle this problem in 2009, with the appointment of a Chief Construction Adviser, intended to provide cross-departmental coordination and leadership on construction industry policy. However, this position was scrapped in November 2015.

This departmental situation was simplified a little in 2018 by the creation of the Ministry of Housing, Communities and Local Government (MHCLG), but there is still no overall government responsibility for the industry.

The internal organisation of the industry itself does not help, with an estimated 300 institutes, associations and other bodies representing each of the individual factions that now exist throughout the extended supply chain [4]. This leads to a wasteful and ineffective duplication of effort in some areas and leaves gaping holes in others.

A few attempts have been made to give the industry a single voice so that it works together more effectively and is better able to lobby government:

However, it seems likely that the industry will continue to be criticised for being fragmented as long as it has an extended, complex and diverse supply chain, each part of which has its own commercial interests and its own stance on policy.

Retrieved from "https://www.designingbuildings.co.uk/wiki/Fragmentation_of_the_UK_construction_industry"
Create an article