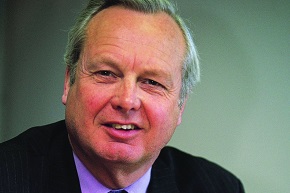 Michael Latham (1943-2017) was a Conservative backbench MP and former chairman of the Construction Industry Training Board (CITB). He was a committed Anglican and, through his active role in the Council for Christians and Jews, became a consistent supporter of Israel, as well as – in his fifties – considering becoming a priest. He was also a staunch Thatcherite although he disagreed with the Iron Lady over the poll tax and NHS charges for dentistry and eye care.

Having served a stint as a councillor for Westminster City Council starting in 1968, he was elected Conservative MP for Melton In February 1974. Subsequent boundary changes forced him to serve as MP for Rutland and Melton before standing down in 1992 after 18 years in Parliament. One of his great interests as a politician was housebuilding.

He died in November 2017 having played a leading role in the modernisation and improvement of construction.

The circumstances leading up to the report included the continual and systematic failings of the construction industry and the deep economic recession of the late eighties that created huge job losses in the sector. Unlike some earlier reports about construction, Latham had the benefit of support from both the industry and government, and this was to prove crucial.

Latham identified that the construction industry was riven with inefficiencies, condemning it as adversarial, ineffective, fragmented, incapable of delivering for its clients and lacking respect for its employees. Industry thinking, he discovered tended to be siloed and his key recommendations included the need for greater collaboration and partnering, not only between supplier and client but also between the various firms working on a project. This, he suggested, would reduce costs and improve quality, performance and completion times.

Latham recognised the importance of public sector procurement in creating better outcomes, the vital nature of contracts and the crucial relationship between client and contractor.

Perhaps his boldest recommendation was that the government should become a ‘best practice’ client. He planned to reduce costs by 30% by 2000 and to increase openness between parties, particularly improving the acceptance of new ideas, something which the construction industry had been at best slow to achieve and at worst completely reluctant to do.

The Latham Report has had a huge impact on the industry and one which is still being felt today. Many of the advances in construction, including collaboration, health and safety, accountability and improved contractual and procurement processes can be traced back to Latham. Despite his recommendations taking time to come to fruition and initial targets missed, it spawned a raft of initiatives which included:

Retrieved from "https://www.designingbuildings.co.uk/wiki/Sir_Michael_Latham"
Create an article