A project manager (sometimes referred to as a promoter's manager or project director) is a specialist advisor that represents the client and is responsible for the day-to-day management of a project.

They seldom participate directly in activities that produce the end result but rather strive to maintain the progress and mutual interaction of the project team in such a way that reduces the risk of failure, maximises benefits and controls cost.

If a project manager is appointed, they function most effectively when they operate as if they were part of the client organisation. They are not part of the consultant team. They should be able to issue instructions and review progress as if they were the client. During the briefing process however the project manager should allow the consultant team direct access to the client and user panels without interference.

Experienced clients may have their own in-house project managers.

The project manager should be appointed as early as possible in the development of the project in order to:

The success of a project manager is generally reliant on the effectiveness of the specific individual appointed rather that the reputation of the company they work for. It is important therefore that the individual selected is named in the appointment document and that they cannot be substituted without the agreement of the client.

The required characteristics of an effective project manager are:

...the named individual (often from the private sector) responsible for the day-today detailed management of the project and who provides the interface between the project sponsor and the supplier members of the project team.

The position of the project manager within the overall project organisation is illustrated below: 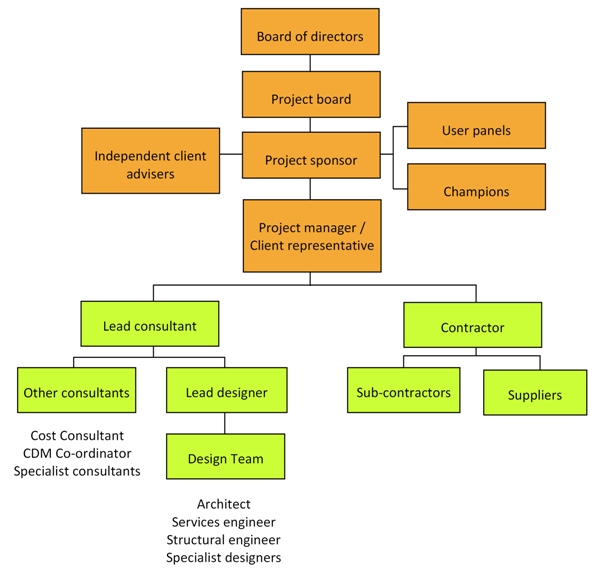