In June 2015, --BSRIA has published a report on the European Hydronic Controls market 2014 (France, Germany, Italy, Poland, and the United Kingdom). This study comprises 2 reports per country:

These reports provide you the segmentation by:

The hydronic controls markets in France, Germany, Italy, Poland, and the United Kingdom are amongst the most developed in the world, collectively worth some €2bn. Germany accounts for one third of the market value of these five important country markets, closely followed by the UK. The less developed Italian market is about half as big again, whilst France, whose nuclear power infrastructure means that there is a much smaller market for hydronic controls, accounts for just over one tenth of the market. Poland, with the smallest population of the countries studied and whose market is considerably less mature is only fractionally smaller than that of France. Control valves make up the lion’s share of the market by value, followed by radiator valves but these ratios are reversed when assessed by volume of units sold. By contrast, controllers and room thermostats account for only approximately 20% of the market value.

These are the findings of a highly-detailed BSRIA study covering both residential and commercial valves, valve actuators, controllers and room thermostats, the most in-depth assessment of the hydronics market of its kind.

These products represent a very sizeable market and are an important component of the markets for residential buildings, including smart homes and of course, commercial buildings.

The rest of Europe is estimated to account for as much again, indicating a market worth in the region of €4bn across the whole of Europe.

Some 73 million valves were sold in these five markets in 2013, of which around 76% were radiator valves. Whilst growth in the radiator market remains stagnant in volume terms, manufacturers have managed to keep prices up so that the market grew moderately in value terms. Meanwhile, the demand for other types of more sophisticated control valves grew about 2.8% in volume, driven by demand for more energy saving control requirements in buildings. Prices here too, have remained strong so that the market also grew robustly in value terms.

The market in 2013 in these five countries also comprised some 1.5 million programmers and time switches, 0.6 million sensors, 0.7 million weather compensator controllers and 0.3 million multi-zone controllers as used in under-floor heating applications. In addition to this, suppliers delivered 5.4 million thermostats to the market, just over two thirds of which were non-programmable, the balance being of the programmable type.

More than 2.9 million valves were sold to the commercial sector in 2013, 86% of which were for small valves of less than or equal to DN25 (1"). The next most popular category was for medium sized valves of between DN25 (1") and DN50 (2"). Due to the replacement market, the number of actuators sold can always be expected to exceed the number of valves sold. Therefore, it is not surprising to see that around 3.9 million valve actuators for commercial applications were sold, of which 95% were linear stroke type however only about 8% incorporated spring return. A large proportion of these were Thermostatic heads and thermal / thermo-electric actuators at the lower end of the market, however beyond these, electric linear actuators accounted for around a third of all commercial actuators sold and two thirds of the market by value. The majority of these were sold with analog (modulating) control functionality.

The market for valves is forecast to grow in volume terms at 2.7% CAGR up to 2017. Pressure independent control valves (PICVs) are forecast to grow much more rapidly, almost doubling their share of the valve market by volume, from 7% in 2013 to 12% in 2018. This reflects, amongst other things, the strong impetus to improve energy-efficiency. The actuator market will grow at about 3% CAGR, experiencing stronger pull from the retrofit market and demand will be strongest for thermostatic heads and thermal / thermo-electric actuators rotary ball valve actuators. 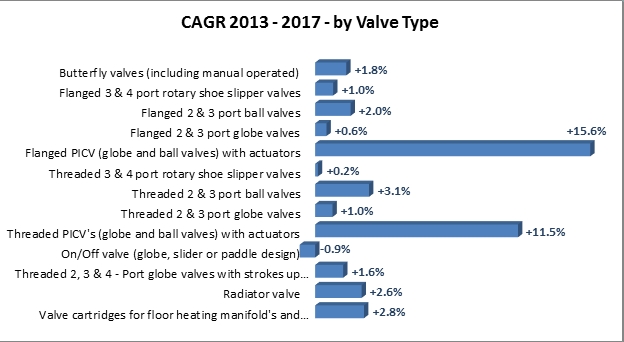 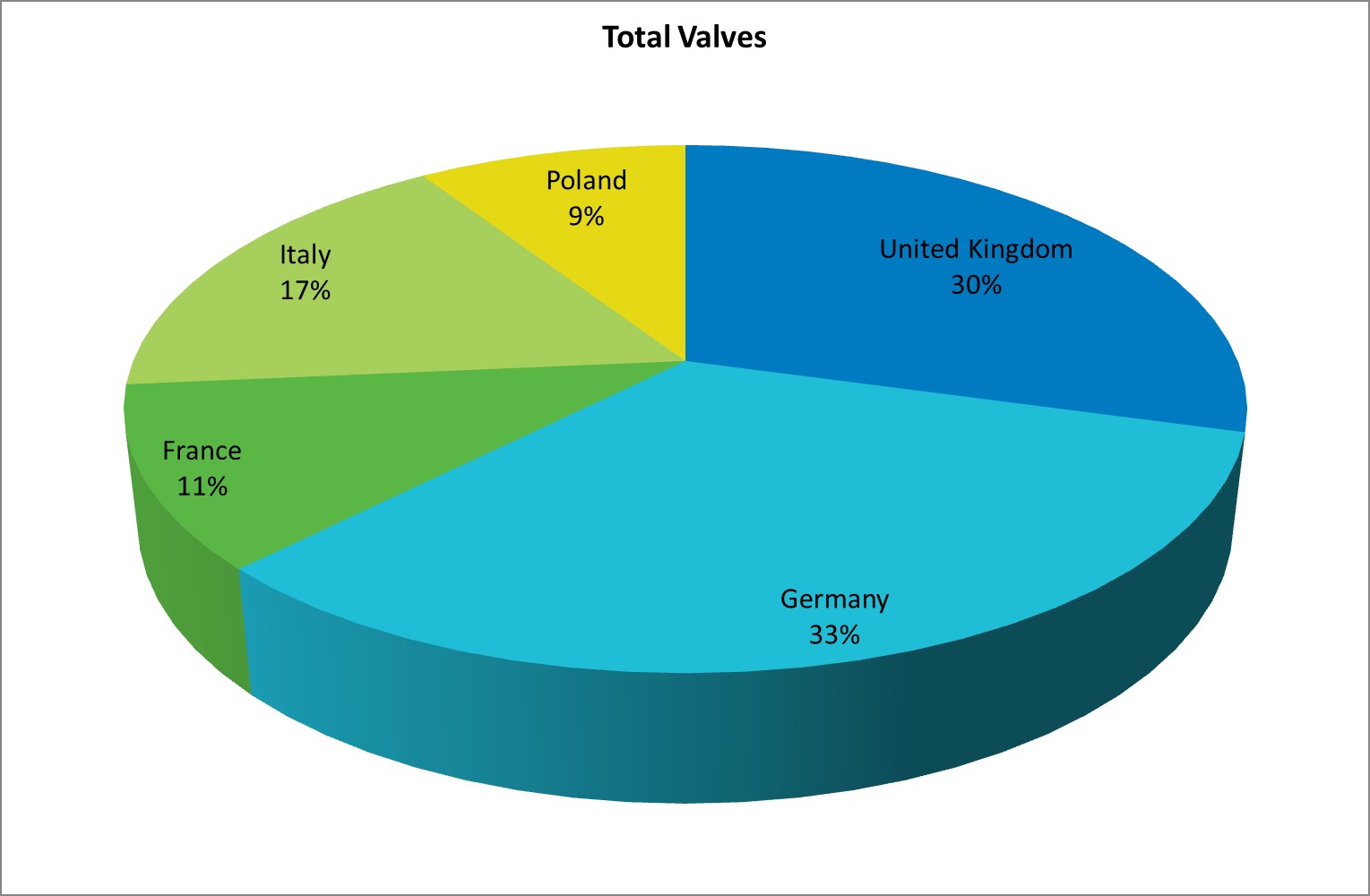 More information is availability at http://www.bsria.co.uk/wmi

Retrieved from "https://www.designingbuildings.co.uk/wiki/European_hydronic_controls_market"
Create an article