These key findings are from a study of five major European markets: France, Germany, Italy, Poland and the UK. The studies cover all valves, actuators and hydronic controls (such as sensors and thermostats), for both the residential and commercial markets.

BSRIA forecasts the value of the market for connected thermostats will grow in 2019 - 2021 by between 14.8 per cent CAGR in Poland and 26 per cent CAGR in the UK. Germany, France and Italy are forecast to show growth between these figures. This is being driven by the rapid growth in uptake of smart home solutions and by the desire of consumers to have remote access to their thermostats so that they can have more control over their heating, comfort and energy consumption.

Connected TRVs are forecast to grow by between three per cent CAGR in Italy and 28 per cent CAGR in France, offering control at room level with a device that many users can fit for themselves.

The market for PICVs is predicted to continue its robust growth, with market value in 2019 – 2021 forecast to increase at just under 10 per cent CAGR in France and Poland and almost 15 per cent in Germany and the UK. This reflects the interest of the commercial sector in managing hydronic systems more efficiently.

Germany and Poland both experienced significant growth in overall hydronic controls market value in 2016 – 2017. In Germany this reflects a strong economy and a robust residential construction market.

A key factor in the growth experienced in Poland is the rise in building standards.

In France the market was flat, while in Italy it declined overall. However, the decline in Italy was driven by a major drop in TRV sales in 2017 following regulatory changes, as all other categories have witnessed growth. In the UK the market saw weak growth in sterling value, but declined when measured in Euros, reflecting a difficult political and economic situation.

Germany remains by far the biggest hydronic controls market with a total product value of over one billion Euros in 2017, with the UK second with just over half that value, followed by Italy. The French market is comparatively small, partly reflecting the strong penetration of electric heating in the French residential market. 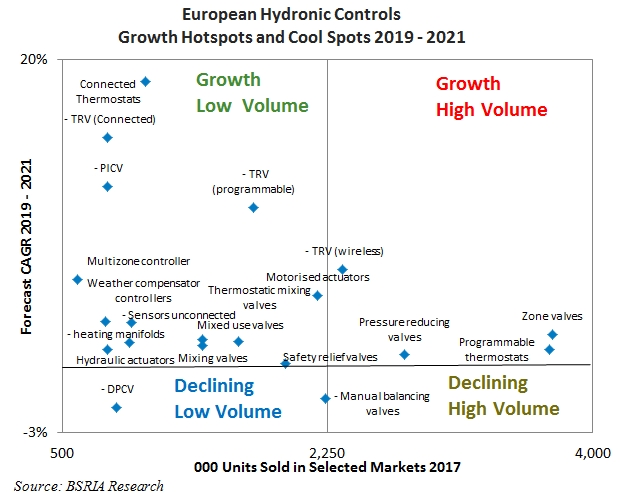 In most markets the value of the actuator market is increasing faster than that for valves, reflecting the demand for more sophisticated actuators. Manual control valves and manual radiator valves are forecast to decline in most markets, as are manual thermostats.

“...these studies confirm two fundamental facts about the European hydronic controls market. The first is that it is a mature market which broadly tends to grow or decline in line with the construction industry combined with economic conditions in a given country. The second – and more exciting fact – is that hydronic controls are being strongly influenced by the general demand for smarter and more connected controls, linked to the growth of the Internet of Things in general and to the movement towards smarter buildings and smart homes in particular. These reports shine a light on this important trend.”

This article was originally published by BSRIA as ‘Growth in European Hydronic Controls market set to sprint’ in March 2018. Ref https://www.bsria.co.uk/news/article/growth-in-european-hydronic-controls-market-set-to-sprint/

Retrieved from "https://www.designingbuildings.co.uk/wiki/European_hydronic_controls_market_2019_-_2021"
Create an article