This article originally appeared as a BSRIA blog post Global BEMS Market set to Approach $7 billion by 2020 written by BSRIA's Henry Lawson and published in December 2014.

If I could point to a market which is already worth some $3.5 billion, or 3 billion Euros, and which is growing globally at well over 10% per annum, at a time when growth in building automation is a fraction of that, I suspect that many investors and industrialists would bite my hand off. This is the industry that we explore in BSRIA's newly updated report BEMS Opportunities.

Even Europe, which currently accounts for almost half the current Building Energy Management Systems (BEMS) market, is growing at around 10%, while North America has been growing faster, and the rest of the world substantially faster still. BSRIA forecasts that the global BEMS market will almost double, to more than $6.8 billion by the year 2020. This impressive growth is set to occur in spite of numerous obstacles and uncertainties. This is partly because the factors driving this growth differ from one region to another. 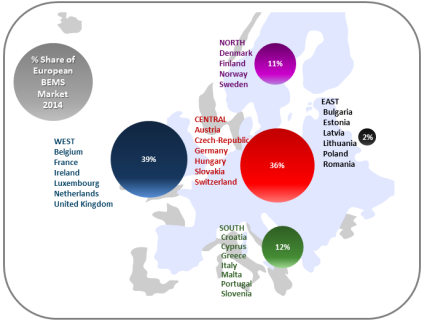 In Western Europe, gas prices almost doubled between 2005 and 2013, while at the same time major economies like Germany became increasingly dependent on import of gas from politically sensitive countries like Russia and the Gulf states, raising the spectre of uncertain supplies. While the rise in electricity prices has been less dramatic, Germany faces the huge task of fulfilling its commitment to shut down all nuclear power generation by 2022, and the UK faces similar challenges as its ageing, coal-consuming and CO2-spewing power stations reach the ends of their lives, with the ghost of Christmas back-outs rising like a Dickensian spectre to haunt the business and political worlds.

This, and increasingly aggressive environmental targets, at national and EU level, mean that even a Europe which has been in or near recession for more than five years continues to invest in energy efficiency. At the same time, there are signs that organisations at all levels are beginning to understand the full potential of BEMS to save money while meeting obligations and improving the brand.

In North America, the pressure of energy prices has been less relentless, especially since fracking of shale gas has got underway. The movement towards environmental regulation has also been patchier – often varying at local and state level, and has faced more opposition. At the same time, the proportion of energy consumed by office buildings has been rising inexorably at a time when energy used in such areas as transport, industry and homes has been either stable or falling, placing office buildings firmly in the sights of those wishing to make savings. North America also benefits from the plethora of firms developing innovative energy management solutions in both the USA and Canada.

In the rest of the world the picture is extremely varied, from developed countries like Japan and Australia with widespread adoption of BEMS, to major emerging economies like China, where energy has hitherto been seen as rather less of a problem but where the pollution associated with fossil fuels is becoming more pressing.

This growth presents huge business opportunities but also as many gauntlets thrown down. The mainstream building automation suppliers are all active, unsurprisingly, given that the two are so genetically interlinked that building automation was originally widely referred to as building energy management. They can offer the benefit of relatively easy integration of energy management into the building's wider functioning.

Against this, as virtually every device, appliance and component of a building becomes capable of generating and communicating data, the advent of big building data has opened huge opportunities both to enterprise data and IT suppliers and to an army of smaller newer suppliers of advanced analytics, allowing building managers to predict and pre-empt problems that degrade a building's energy performance.

Some of these new entrants will fall by the wayside, especially given the level of overlap between many of the offerings, others will be ripe for take-over, but a few are likely to emerge as major disruptive players. In our report we identify the leaders and challengers, along with the niche players and some of the most likely acquisitions. As always, there is an implicit conflict between the move towards integration on the one hand and the desire for innovation on the other, and we look at some of the standards that are emerging to address this.

The prize is most likely to go to companies that can combine innovation in new technologies, and understanding of how a building's occupants interact with the building, with a deep-seated understanding of how buildings function. This report should help to shine a light on who will be left holding a torch for others to follow if and when the lights really do threaten to go out.

Retrieved from "https://www.designingbuildings.co.uk/wiki/Global_building_energy_management_systems_market"
Create an article