On 18 March 2020, BSRIA’s Worldwide Market Intelligence published updates to its Building Automation Controls (BACS) studies for four key Western European Markets: Germany, Spain, the Netherlands and Belgium. The studies confirm that, while each market has some special characteristics, there are some important common trends.

As of February 2020, BSRIA was forecasting strong growth in all four markets, though unfolding events, including the coronavirus, could have an adverse impact. In the period 2019- 2024 the forecast ranges from 3.1% to 4.8% CAGR depending on the country. The strongest growth is forecast for Belgium and Spain, reflecting in part the economic recovery after a difficult period in the latter. 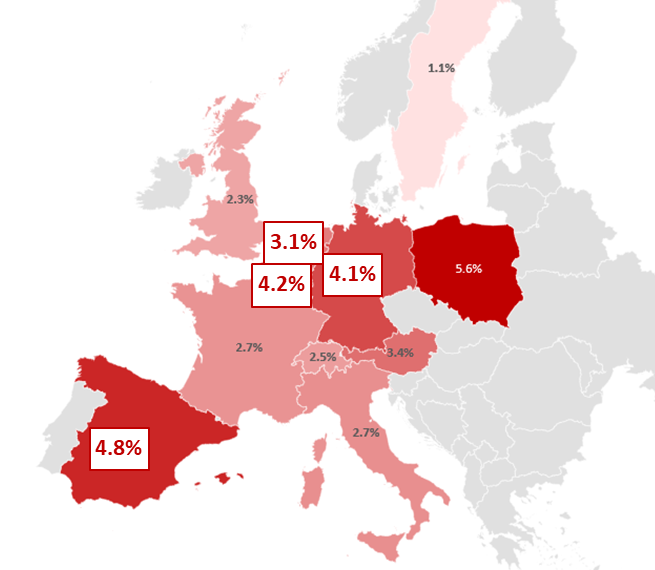 The effects of economic conditions are currently open to a lot of uncertainty, especially given the possible impact of the coronavirus pandemic which, according to some analysts, could potentially spark a serious global recession. The UK’s exit from the European Union still leaves considerable uncertainty about the long-term relationship between the two parties as negotiations for a new trade deal have started with substantial differences of opinion in many key areas.

However, there are some clear technology developments that are driving change, supporting building controls markets.

Software and analytics are becoming increasingly important and strategic. In three of the four markets, BACS software is growing faster in value than the total BACS market. In Germany and Spain, the growth for this segment is twice as fast. Since software is increasingly bundled with the wider service offering the actual importance of software to BACS is even greater than the crude sales “numbers” for software suggest. Increasingly, the quality and value of a BACS supplier’s products and services will depend on the capabilities of the software deployed to manage a building more intelligently and proactively.

While there is a move to the Cloud and more specifically to Software as a Service (SaaS), the great majority of software sold remains server-based, ranging from 75% in Spain to more than 90% in Germany, the latter figure reflecting the cautious nature of much of the German market.

Controllers, particularly DDC controllers are increasingly freely programmable, with the vast majority of all products being at least configurable. This enables controllers to be used for a wider range of applications and scenarios.

The advance of the Internet of Things is reflected in the fact that, increasingly, field devices are capable of being easily connected to the internet. This is especially true of larger and more complex devices. In all four markets, BSRIA research found that over 60% of Air Conditioning Units had an inbuilt capability of being connected to the internet. However, this capability was currently being used only in a minority of cases where there was a direct benefit in connecting to the net.

One key measure of the move towards “smarter” buildings is the extent to which HVAC, which has traditionally been the core application of BACS, has converged with other key building systems, allowing common and coordinated control. For example, to maximise energy efficiency while maintaining a comfortable working environment it makes sense to manage HVAC, lighting and blinds via a common system.

Our research showed that while convergence is increasing, in Germany and Belgium the majority of new buildings with BACS still focused purely on HVAC applications. While, BACS refurbishment or retrofit projects were less likely to be converged, a substantial and growing minority are now linking HVAC with other building services. 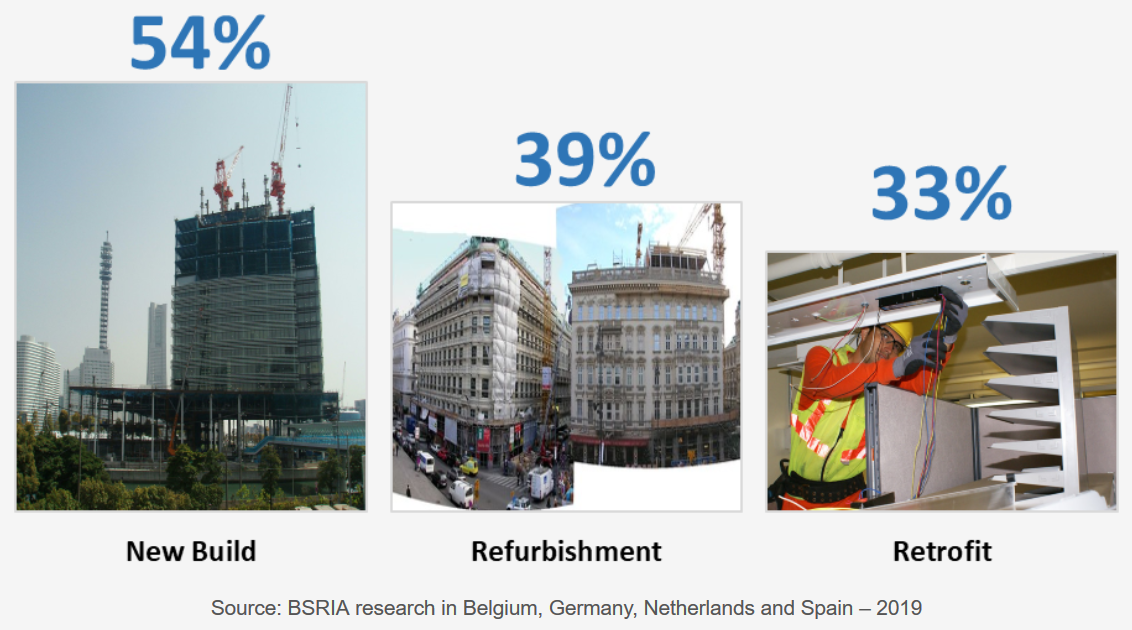 In all the markets researched the BACS products form part of a much larger market embracing both other products and labour. The labour component typically represents about half the market value, in some cases more, and many of the larger BACS suppliers are focusing increasingly on the service element of their delivery.

Once labour and other products are factored in, the BACS industry is worth almost 2.5 billion US dollars across Europe as a whole and will be increasingly central to the development of both artificial intelligence and the Internet of Things.

This article was originally published on the BSRIA website on 18 March 2020. It was written by Henry Lawson, Senior Analyst, Worldwide Market Intelligence, BSRIA Ltd.

You can find out more at:

Retrieved from "https://www.designingbuildings.co.uk/wiki/European_BACS_Market_2019_-_2024"
Create an article