Before delving too deeply into information about market sizes and country-specific data, we need to be clear about what we mean by a smart home. There are myriad definitions for smart homes and connected homes in the industry, with companies’ own definitions of such systems often differing widely from their competitors. BSRIA (Building Services Research and Information Association) defines smart homes as ‘…a building control system, which provides integrated, centralised control of two or more individual systems’.

Effectively this is the residential extension of commercial type controls. These individual systems can be any of the following: 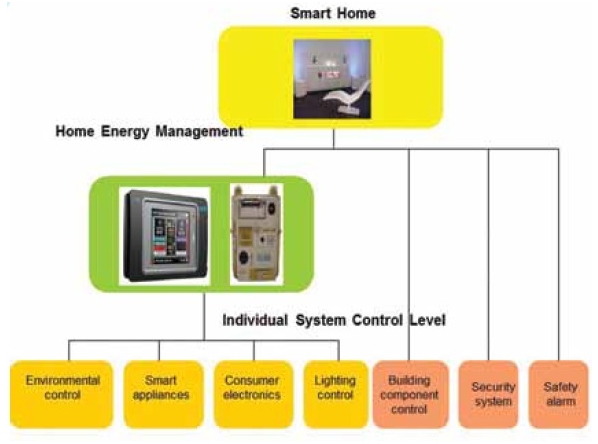 Devices may be connected through a wired or wireless network to allow control via a personal computer, and may allow remote access via the internet (using a PC, smartphone or tablet). If the Smart Home system is accessible remotely via the internet, BSRIA refers to it as a Connected Home.

Home Energy Management Systems (HEMS) are increasingly part of the Connected and Smart Home offering. HEMS provide updated energy and budgeting information to help optimise home energy use. They may provide an easy-to-use application that allows a utility to schedule demand to avoid peak periods, and can integrate all components in the home (including electric vehicles, energy storage, and micro generation). 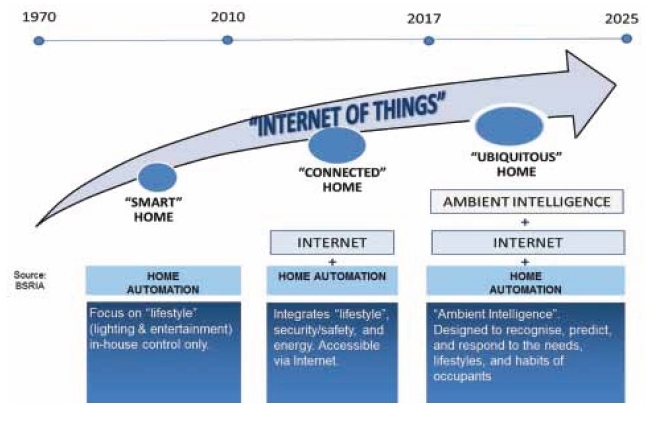 While early Smart Home systems tended to be stand-alone solutions, focusing on ‘lifestyle’ needs such as lighting and entertainment (Figure 2), current versions generally encompass energy management and are accessible via the internet. Within a decade as we move towards the ‘internet of things’, we expect to see the emergence of the ‘ubiquitous home’, where sophisticated ‘ambient intelligent’ systems learn about users’ behaviour and lifestyles, and enable the house to predict and respond to all the occupants’ needs and activities. Internet connectivity and the arrival of standard, multifunctional elements present an opportunity that is being seized by telecoms and utility companies which are now offering a range of ‘connected home’ solutions. 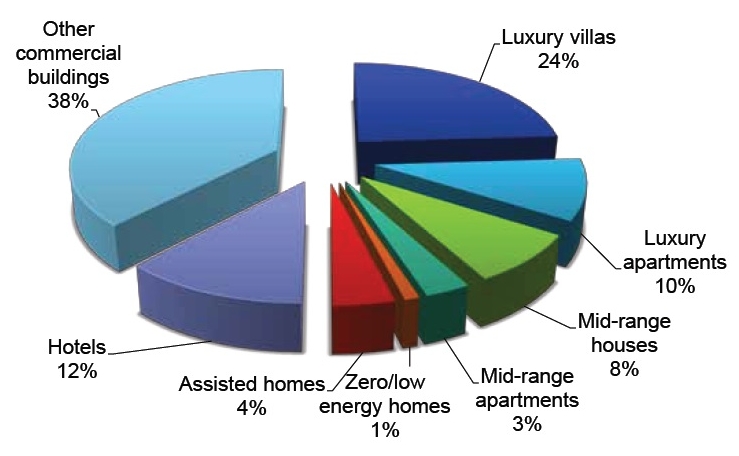 According to these studies, the European connected and smart home product market grew by almost 19% in the period 2010-2012 to reach just over €0.5 billion (at manufacturer selling price - msp) and is predicted to grow by 8% on average each year until 2015 to reach €0.6 billion (msp). The current connected and smart home market still remains a niche high-end market in Europe, although penetration in light commercial applications (offices, hotels, restaurants) has been growing, from 34% in 2010 to 50% in 2012 (Figure 3.).

Sales of connected and smart home systems for residential applications, are still concentrated in the high-end housing segment.

Residential consumer awareness has been increasing across Europe, not least due to the growing popularity of smart phones/tablets and their role as possible user interfaces (via apps) in smart home solutions. Nevertheless, in these times of austerity in Europe the high cost of a smart home solution prevents these systems from reaching the mass market. In the meantime BSRIA sees an uptake of more standardised mid-market ‘plug-and-play’ connected home solutions, which can be installed by electrical contractors. 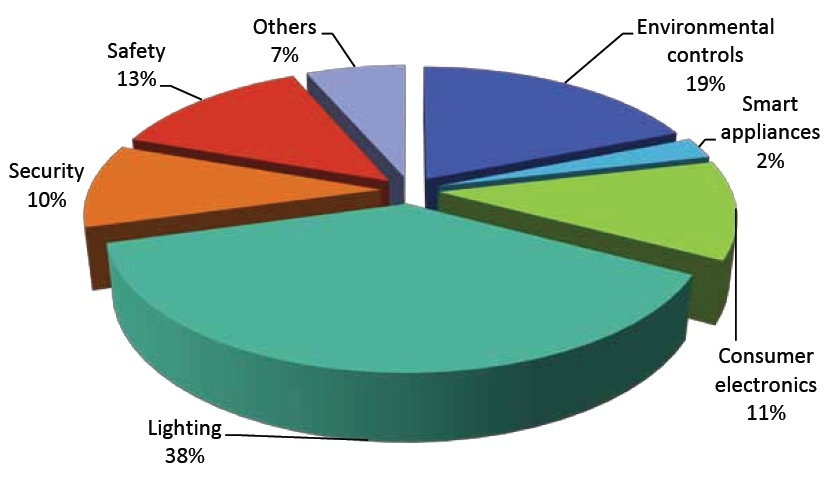 Lighting controls are the main application (Figure 4.) for these systems, with environmental controls second largest, as customers have been increasingly worried about their energy bills and the need to reduce consumption of energy. Homes offering assisted living are an important market in the Netherlands with financial support from the Government.

So far most of the smart home suppliers have tended to be highly regionalised, competing either in Europe or in North America. Only a few players are significant in both markets. However Honda USA’s much publicised announcement of its ‘Smart Home USA’ in April 2013 and Google’s acquisition of Nest in January 2014 could herald the arrival of other types of global players in this market.

This article originally appeared in the May 2014 edition of BSRIA’s Delta T magazine. It was written by Zoltan Karpathy, Senior Manager intelligent Buildings and Homes BSRIA Worldwide Market Intelligence. It has been posted here by --BSRIA 08:51, 10 December 2014 (UTC)

Retrieved from "https://www.designingbuildings.co.uk/wiki/European_connected_and_smart_home_market"
Create an article