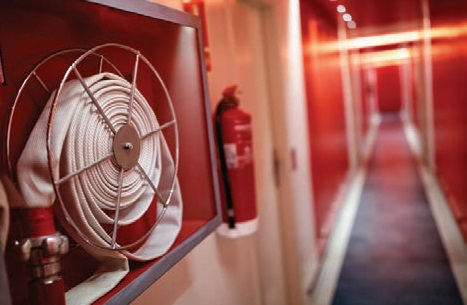 At UK Construction Week in mid-October 2017, Graham presented the latest advice on building materials following the Grenfell Tower disaster to audiences ranging from construction professionals to members of the general public.

The presentation commenced with a discussion on the Department for Communities and Local Government (DCLG) circular entitled 'Update on interim mitigation measures required pending remediation of cladding'. This advisory note informed building owners to ensure suitable liaison with the fire and rescue service and to check that their fire risk assessment, required by the Regulatory Reform (Fire Safety) Order 2005, were current and relevant to the building’s situation of residents, maintenance and general upkeep.

As well as engaging with occupiers and giving them an opportunity to voice any concerns, the DCLG circular noted that ‘all residents should be surveyed in respect of their ability to evacuate the building without assistance’. It is unclear what practicable action would be possible if the survey concluded that a vast majority of people on floors far above ground level would struggle to move quickly down several flights of stairs in case of fire.

This issue highlights several potential shortcomings in terms of the competency of fire safety managers to make such judgements, the adequacy of the fire risk assessment if it overlooked such issues, given the typical scope to only risk assess ‘common parts’ of the building, the absence of legislative compulsion, and the necessary funds, to make infrastructure or system led safety improvements.

General good practice considerations follow in the DCLG note before it recommends that the building owner undertakes a fire strategy comprising:

If the conclusion of this exercise is to introduce simultaneous evacuation, it is recommended as supported by a fire alarm and a continuous Walking Watch. It was debated at the NEC whether such measures were suitable substitutes for adequate means of escape capacity, and was quickly and widely concluded that they were not. 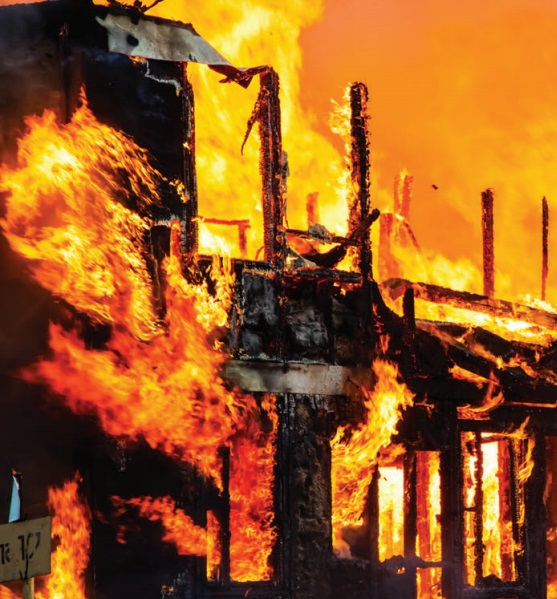 BS-5839-1:2017 puts almost as much emphasis on the need for automatic detection in buildings where the fire risk warrants it as on avoiding false (nuisance) alarms. Interestingly, BS-5839-1 discusses the whole procurement process of a fire alarm system through design, installation, commissioning, documentation, certification, acceptance, verification, maintenance and also the user’s responsibilities.

Fire safety in buildings and settlements is as important as doctors saving lives or barristers defending liberty. Nonetheless, there is no corresponding benchmarks for suppliers, designers, installers, clients, end users of fire safety systems. This might result from a complacency stemming from the seldom occurrence of major fires when compared to the daily business in hospitals and law courts, it might occur due to market pressures and the pursuit of profit, or indifference to the lower end of socio-economic situations where fire safety can be neglected, or an incompetence of using design guides, or a blend of such attitudes and issues combining to establish the present position of our national building stock.

In the seven BRE tests of the summer 2017, following Grenfell, 217 building cladding samples failed the BS-8414 test and would not receive a classification to BR 135. Twelve buildings passed. If this tip of the iceberg ratio is consistent across clad buildings in our towns and cities, there is a colossal legacy to confront.

The Building Regulations 2010 run to circa 20 pages and they are clear in their intent. Apparent persistent failure suggests a general industry problem of interpreting guides, in particular Approved Document B. This merits further investigation with respect to the external building face being specified to Diagram 40 as Class 1 or Class 0 (national class), whilst clause 12.7 and Table A7 — concerning limited combustibility — being seemingly overlooked for the overall cladding system build-ups.

When assessing the B4 requirement of wall combustibility, the equivalency between BS-476 and BS EN 13501-1 is also questionable. Products claiming National Class 0 are widely accepted as being equivalent to Euro Class B, although this can only be proven if a product passes both tests and receives the corresponding classification that qualitative equivalency suggested.

A recent cladding product was reported by a contractor as achieving Class 1 to BS-476, but Euro Class F to BS EN 13501-1. The European classes are noted as follows:

Both A classifications have a Fire Growth Rate index (FIGRA) of less than 0.15 kW/s, and no ‘flashover’ is permitted (in accordance with a large room scenario to EN 14390 which evaluates fire sources of 100 kW (small bin) for 10 minutes, followed by 10 minute test of a 300 kW fire source (representative of a small armchair)). 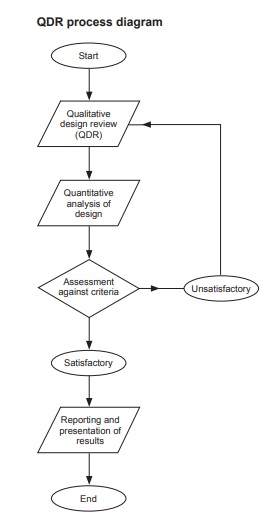 Advice on materials therefore cannot be isolated from issues of responsibility and accountability in the supply chain. The increasing use of qualitative desktop studies are not underpinned by reliable manufacturer data or quantitative validation; thus they stand, or fall, on an engineer’s due diligence, experience, expertise and attitude to risk. This is not sustainable in the long-term due to risk adverse indemnities and the possibility of emerging large-scale failures should the BRE test pass/fail ratios be demonstrated on a wider scale.

Quality assurance in the supply chain and in product marketing needs much stronger regulation. Toxicity is a further key challenge for building materials, particularly for building linings — the enhanced position of BS EN 13501-1 is that it also considers smoke production and flaming droplets for materials, whereas BS-476 is silent on these matters. Many tests exist to demonstrate compliance, and it was discussed at the NEC that routes need mapping out for manufacturers to follow to provide greater certainty over material performance in case of fire exposure.

This method provides a societally acceptable safety margin. However, the external fire spread premise of division into smaller ‘enclosing rectangles’ relies on the fire stopping details at external building envelope junctions. Thus a fire strategy, setting the parameters for detail design to follow, can have its expectations voided if the detail design, installation, site verification, maintenance and building user fail to deliver and/or maintain the necessary junction details.

A need-driven golden thread of responsible professionals emerge — from fire engineer to Architectural Technologist to Clerk of Works to accredited Main Contractor and sub-contractors, to competent building owners and responsible building users. BS-5839-1 would seem to set out a good road map for all fire safety design aspects to follow.

The initial layer of a defence in depth approach is therefore always competency. If this layer is breached by human error, the building’s active systems and passive fire protection measures are then drawn upon to protect people. Safety margins are thus important: for example, take a BS-476 furnace test for a fire door specimen which has a significant safety margin between the test laboratory and end use application. For the cladding test of BS-8414-1, the test wall has compressive strength of 7.3 N/mm2, a density of 730 kg/m3 and thermal conductivity of 0.18 W/mK. How much variation from this is safe, considering that the cladding specification might also vary from the test specimen, as might the build quality. It must therefore be queried if the reasonably close correlation between BS 8414 test results and the resulting BR 135 classification has a sufficient safety margin for end use application.

Furthermore, how are details verified? Graham Smith proposed that there ought to be an approved set of Part B ‘robust details’, similar to the robust details published in 2007 to meet Part L. These details will take time to develop properly and they will need pan-industry development, consensus and on-going currency.

There is a suite of standards in the BS EN 1364 to BS EN 1366 suite of documents for building components to meet, ranging from curtain walling and ceilings, to columns and stairs, to dampers and penetration seals. The National Building Specification (NBS) is a good vehicle to allow efficient search for specifying, but there is no substitute for interrogation of product performance and their interface with other building elements.

The final part of B4 concerns risk of fire from roof coverings. This is covered by Table 16 in Approved Document B for national and European classes. A similar argument applies for the British and European equivalency — it can only be claimed if the product is tested to both standards. Approved Document B permits lower specifications for roof lights and glazing if they are separated by a 3 m distance and do not exceed 25 sq. m. If exceeded, a fire engineering approach should be utilised, but at all times there must be a focus on the products in question and their performance in fire conditions.

Within buildings, three key topics were discussed: fire doors, cable fire safety and furniture. New doorsets can straightforwardly meet the relevant parts of BS-476 or BS EN 1634; however, an issue arises when retrofitting doors into existing frames since there is no evidence at that point that the doorset, as a fire barrier, will provide the fire resistance associated with the door alone. Doorsets supplied with fire certification might also benefit from Field of Application (FoA) reports so that the parameters of a particular doorset test criteria are fully understood. FoA reports state the actual fire resistance that a door achieves in test conditions, which can vary a lot depending on the exact door configuration — e.g. minor works to improve rebates and add over-head door closers could enhance the door fire resistance.

Fire resistant ironmongery may be specified to BS EN 1634-2, with hinges specified to BS EN 1935 for the appropriate door size. Incorrectly specified hinges might lead to a fire causing large doors to distort and bow towards the fire (as has been observed in test conditions) more readily. Once distortion occurs, hinges become exposed and can melt. Mortice locks can cause charring around the lock itself, increasing the burn rate. Providing intumescent paper around mortice locks can mitigate this issue.

Cable management in buildings varies enormously from very good to dangerous. Key points are to prevent cable tray overloading, and to use metallic ties. In April 2010, cable trays supported by plastic ties failed in Shirley Towers in Southampton, trapping attending firefighters. They were not able to retreat: two of them — James Shears and Alan Bannon — perished. It is not just escape that is important in building design, but firefighter access routes for search and rescue activities.

There must be some consideration given to furniture as well. Adjacent industries like rail and airports have rules to govern locations of upholstered furniture, and they use combustion modified foam. Curtains, blinds and drapes are non-combustible or flame retardant in public spaces. Ministry of Defence standards also have furnishings with stringent reaction-to-fire performance in places of detention. The question is a balance between personal choice in high-rise homes and safeguarding neighbours from fire and smoke exposure. Should there be a further revision to the Furniture and Furnishings (Fire Safety) Regulations 1988 (amended 1989, 1993, 2010) for tall buildings?

In conclusion, it's important to reflect on this article and the wider commentary on this matter, and consider how we dignify the memory of those who died in Grenfell. What do we all need to stand up and say and do in terms of our role as Architectural Technologists?

This article was originally published in AT Journal winter edition 124. It was written by Dr Graham Smith MCIAT.

Retrieved from "https://www.designingbuildings.co.uk/wiki/Flammable_building_materials"
Create an article