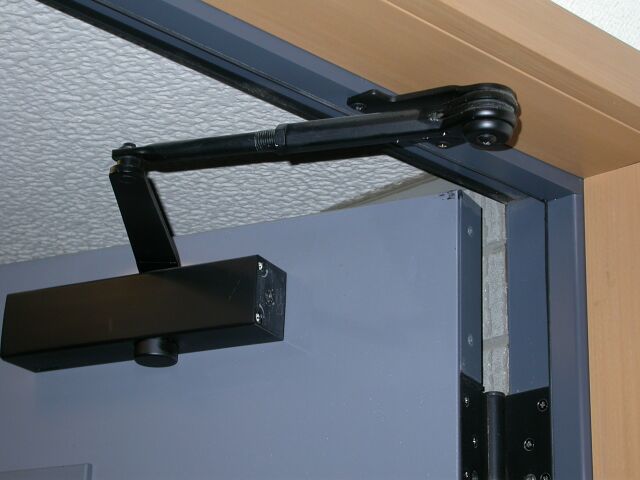 A door closer is a hydraulic device that is used to automatically close a door after it has been opened. Door closers are commonly used as a fire prevention measure, typically installed on fire doors, as well as helping to prevent draughts.

The most common types of door closer include:

Surface-mounted door closers are the most common type, as they are comparatively cost-effective and easy to install. They are fitted to the door frame behind the door, next to the hinge. The arm of the closer retracts to closed configuration as the door closes.

As well as the standard, double-lever arm, there are different kinds of arms available for surface-mounted door closers, depending on the application and to provide more functionality. These include:

Concealed door closers are hidden within the door jamb and are often used when aesthetics of the door is an important factor. This type fits in the morticed recesses in the door and the frame, allowing it to be completely concealed when the door is closed. This type is typically used for ‘double-acting’ doors, i.e. those that swing both ways; usually in high-traffic applications such as a busy office building door.

Floor closers are similar in that they are concealed within the floor and are not visible when the door is opened. Fitted into the underside of the door is a bar which controls the closing action, usually with an open setting that allows them to be left open. They are typically used with pivot hinges rather than butt hinges, which are stronger and more durable, and can often be found on glass front doors of commercial buildings.

Retrieved from "https://www.designingbuildings.co.uk/wiki/Door_closer"
Create an article