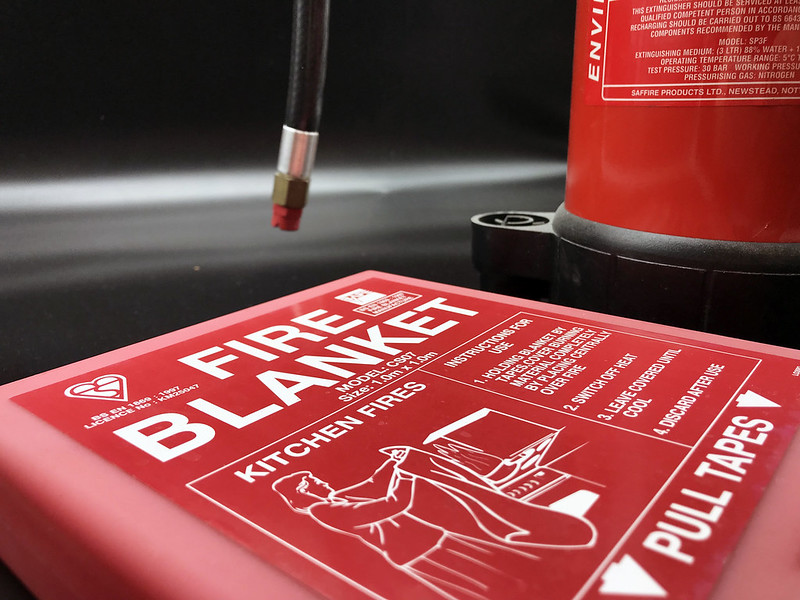 A fire blanket is a piece of fire protection equipment made from fabric that can be used to control or extinguish small fires.

Conceptually, it’s difficult to determine the first time someone used a heavy piece of fabric to manage or extinguish a fire. One of the earliest patents for a fire blanket was filed in 1911 by Ephriam Bishop of Kingston, New York, who presented an example of a piece of heavy, flexible material (more than likely wool or felt) which had been “properly treated to fireproof.” Bishop then specified the supports and containment system for the fire blanket, but did not go into details regarding the fireproof treatment process.

In 1953, Theodore Harry Diacos of Chicago, Illinois filed another patent that specified “non-combustible material, preferably of a fabric somewhat light in nature, for which purpose I prefer the modern fiberglass materials.” (Fiberglass is also known as glass wool or glass fibre.)

As with earlier versions of this form of effective, yet low-tech fire prevention equipment, modern fire blankets also incorporate some type of fire resistant or fire retardant material. This material, which can withstand high temperatures, essentially cuts off oxygen to the fire in order to smother and extinguish the flames.

Glass fibre is still commonly used in fire blankets, but now is usually layered with other fire retardant materials rather than used as a single layer.

Kevlar (poly-para-phenylene terephthalamide) is also popular for its inherent heat-resistant characteristics. Kevlar is a low weight, high strength material that is stable at high temperature and whose fibres are five times stronger than steel per unit weight (in tension). It is used for heat- or flame-resistant fabrics. An inner layer of fire retardant film is incorporated into two layers of glass fibre or kevlar.

Fire blankets can help to smother and extinguish fires. They are easier to operate than other fire prevention devices, and can be particularly effective when a person’s clothing catches fire.

They are most commonly used in homes, laboratories, workshops or kitchens. They are suitable for small contained fires in Class A (flammable solids), B (flammable liquids) or F (cooking oils) fires, being tested on a container of 345mm diameter, 100mm depth and containing 3 litres of fuel. Fire blankets are not considered suitable for larger fires where the appropriate extinguisher should be provided. Fire blankets are also considered unsuitable for fires caused by flammable gases.

Fire blankets should be placed close to areas where a fire is most likely to occur, but not where it would be dangerous to reach (e.g. over a cooker that may have a burning pan on it).

'BS EN 1869:2019 Fire blankets' specifies requirements for fire blankets used to control small fires. The standard indicates that the blankets should not be reused after being deployed in a fire extinguishing capacity. The guidance recommends indoor use only. The 2019 standard replaces BS EN 1869:1997 and adds a test on a Class B fire and traceability/batch marking requirements. Prior to that, fire blankets were covered under BS 6575:1985.

Retrieved from "https://www.designingbuildings.co.uk/wiki/Fire_blanket"
Create an article