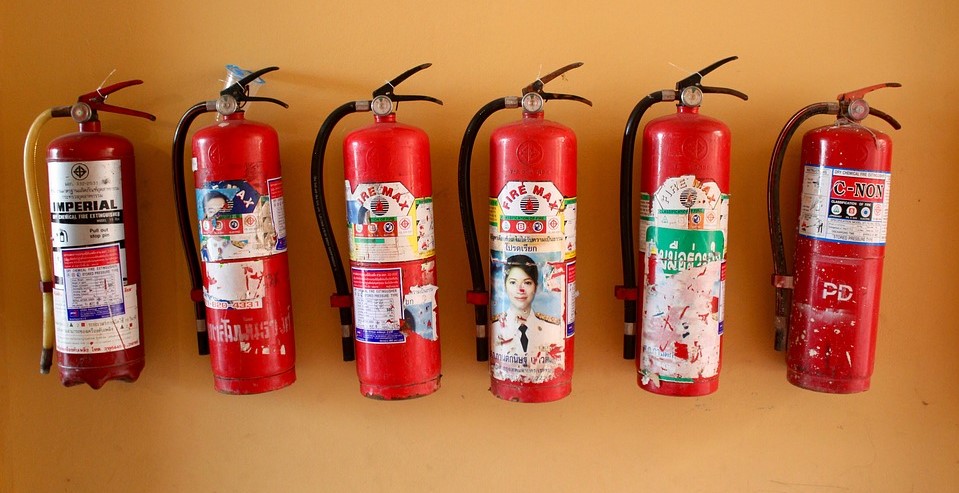 Fire extinguishers are portable apparatus used to put out small fires in emergency situations. They work by distributing a suitable extinguishant (such as liquid, foam, powder and so on) onto the burning material to cut off its supply of oxygen or suppress the chemical reaction occurring in the flame.

The earliest forms of fire extinguisher were introduced in the Middle Ages. These devices, known as squirts, were pump-like devices with nozzles on the end.

The nozzle of the pump would be put into water, and a plunger would be used to pull the water into the squirt. The nozzle was then aimed at the fire, and the water stream would be directed towards the fire.

In 1723, Ambrose Godfrey was awarded the first official patent for a fire extinguisher. The German-born British chemist was best known for his production of phosphorus, but in 1724, he published a document entitled ‘New Method of Extinguishing Fires by Explosion and Suffocation’. His idea was to design a machine consisting of a cask of an aqueous solution surrounding a pewter chamber of gunpowder. The idea behind this was that a series of fuses would be detonated which would then make the gunpowder explode and distribute the liquid.

The first portable fire extinguisher was invented in 1819 by Captain George William Manby. His device consisted of a copper vessel containing a solution of potassium carbonate and compressed air.

While the powder inside fire extinguishers is non-toxic, contact should be limited. Precautions should be taken to minimise incidents where these circumstances could occur.

Fire extinguishers should be checked and maintained on a regular basis. While it’s uncommon for a device to have an expiration date, its reliability can degrade over time if it has not been properly maintained.

In the UK, there are three types of required maintenance:

Retrieved from "https://www.designingbuildings.co.uk/wiki/Fire_extinguisher"
Create an article