BRE Global carries out fire investigation activities on behalf of the Department for Communities and Local Government (DCLG). An important element of its work is to publicise findings to designers.

Fire and smoke-spread in concealed spaces within buildings can present both a life risk to occupants and firefighters, and cause widespread damage with extensive, difficult, and expensive clean-up and re-instatement. Indeed, in some cases, smoke deposits (and their resulting odour) can never be properly removed and buildings have had to be demolished. One such concealed space is the roof void. This article provides an introduction to the issue of concealed fire spread within roof voids considering the ‘lessons learned’ from real fires and the results of poor compartmentation.

In 2010, DCLG (then CLG) published a research study on fire compartmentation in the roof voids of residential buildings [1]. This found it is common practice within the industry for limited details to be included within building regulations applications. This puts the onus on the building contractor to ensure the correct detailing - which increases the risk of errors and omissions.

The main issues of note were:

It is evident that compartmentation in roof voids is a particular issue with respect to hidden fire spread but that adequate compartmentation and correctly specified cavity barriers can be effective in limiting fire damage.

The BRE Global fire investigation database has been reviewed to identify those areas where compartmentation in roof voids played a role (either positively or negatively) in fire development and the nature and extent of fire spread. Ten case studies have been chosen by BRE Global and are reported here due to their relevance to compartmentation in roof voids. To ensure confidentiality, no mention is made here of specific locations and all incidents are referred to with reference to the type of structure involved.

The fire started in a small section of a flat roof of one apartment block, ignited the sarking felt on the adjacent pitched roof and spread into the roof void. The fire spread within the roof space over three apartments, bypassing two compartment walls.

Eventually, the fire spread into the roof void of an adjacent block, again involving three apartments and bypassing two compartment walls. The compartment walls were constructed from concrete building blocks. However, it was clear from the scene that no attempt had been made to fire-stop the junction between the walls and the roof as detailed in Approved Document B [2]. Figure 1 shows the junction of the compartment wall with the roof covering. 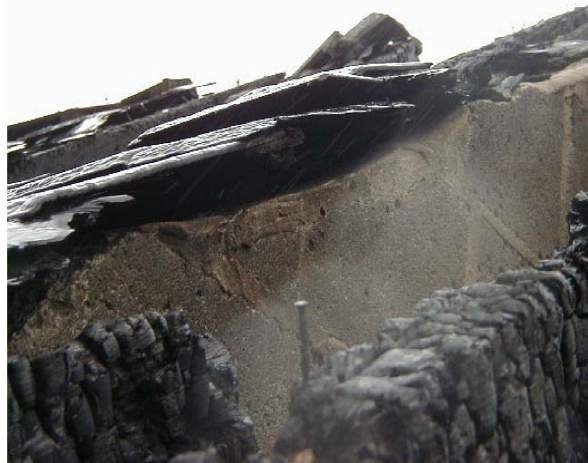 Fig. 1 Lack of fire-stopping between compartment wall and roof covering.

It is likely that the fire was initiated as a result of hot work being carried out on pipes penetrating the exterior wall of the three-storey block of flats. Initial fire spread was through the external wall cavity breaking out at roof level some distance from the point of origin. Once in the roof area, the fire spread rapidly, leading to collapse of the roof trusses and break out back into the floors below. It is clear from the speed and extent of the fire spread that the cavity barriers in the wall and compartmentation within the roof space were ineffective. Figure 2 shows the point of fire origin and the area where the fire broke out from the roof. 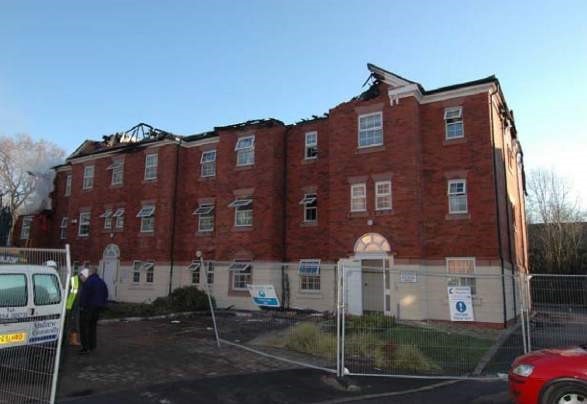 Fig. 2. Block of flats showing the area of fire origin and damage to roof level.

The fire is believed to have started on the landing of the second floor of a four-storey residential building. The fire spread from here to involve the third (top) floor landing and ultimately, to the roof structure, most probably via the roof soffit above a window onto the landing. Compartmentation was breached as the fire traversed the roof structure over a number of compartment walls. The compartment walls were constructed from concrete blocks clad in plasterboard with a plaster skim coat. The walls were continued up through the ceiling to the underside of the roof covering. The seal between the top of the wall and the roof covering seems to have been made from mineral wool (see Figure 3). 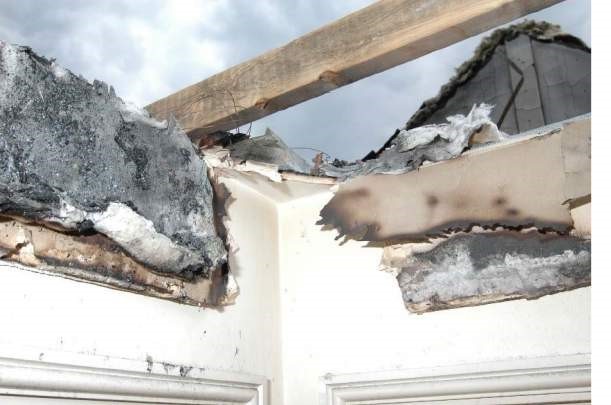 Fig. 3 Mineral wool fire stopping along pitch of roof in the background of the photograph

It is believed that the fire spread due to a combustible membrane between the tiles and the roof structure.

Fire broke out in one of the flats on the top floor of a four-storey apartment block. The fire broke out of the window and into the roof void through the roof eaves soffit and spread to destroy the entire roof area. The roof was a new pitched roof over an existing flat roof formed from a concrete slab. For this reason, the roof void could be considered to be a single compartment and separation would be necessary to maintain the maximum distances of cavities rather than specifically to maintain compartmentation. 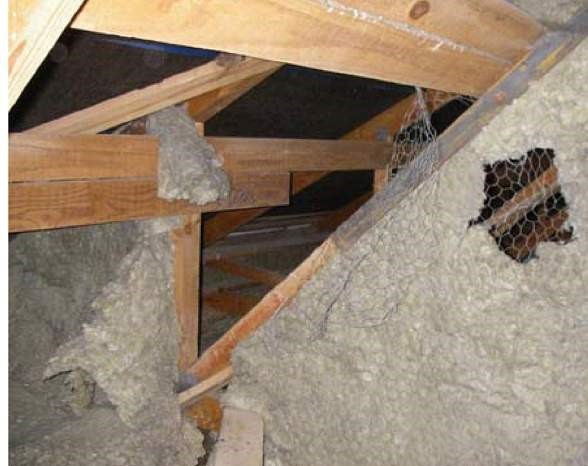 Figure 5 shows the attempt made to provide fire stopping where the curved section of the roof crossed the compartment wall. 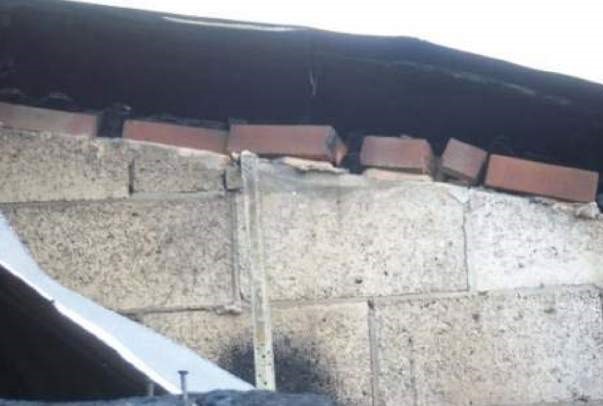 The fire started in a first-floor flat of a block of flats, broke out of the room of origin through a window, and entered the roof through the eaves. Fire spread rapidly throughout the structure of the roof. The roof was constructed from lightweight timber truss rafters while the roof covering was ceramic tiles under which a bitumen impregnated sarking felt had been fixed. Fire separation within the roof space was completed using a mixture of blockwork and cavity barriers.

The cavity barriers were constructed from mineral wool fixed to a wire mesh. The barriers were fixed to timber trusses using clamping plates. The fixing of the fire barrier to the timber trusses does not appear to have been in accordance with manufacturer’s guidance since the barriers did not press up against the underside of the sarking felt so the fire was able to spread along the sarking felt over the top of the cavity barriers (see Figure 6). 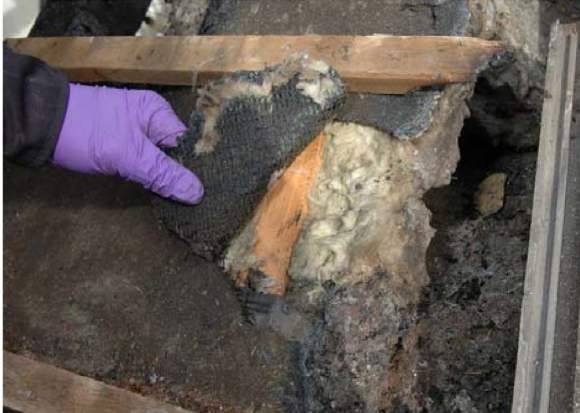 The fire is believed to have been started by a cigarette discarded in wood chippings in flower beds arranged around the outside of a three-storey block of flats and in contact with the external wall. The fire spread from the wood chippings into the cavity of the external wall via a plastic air brick situated beneath the suspended ground floor and providing ventilation to the cavity .

Cavity barriers in the external wall cavity were either missing or poorly fitted. The fire spread up the cavity to the roof of the building, causing significant structural damage to the roof and accommodation storeys. A combination of fire-fighting and effective compartmentation, both between compartments and within the roof space, prevented more extensive fire spread within the building. Figure 7 is an aerial view of the building showing the damage at roof level. 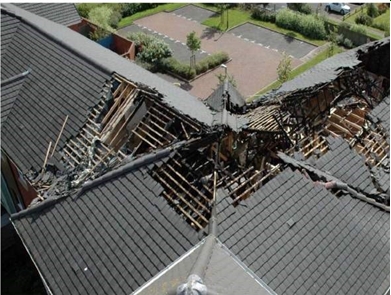 Fire started within a first-floor bedroom of a two-storey residential care home. Smoke entered a wall cavity and found its way into the roof void where a detector was activated. Due to early activation and the prompt action of the fire and rescue service, the fire was prevented from spreading into the roof void. However, there was inadequate separation within the roof space. The junction between the external wall cavity and the roof space is shown in Figure 8. 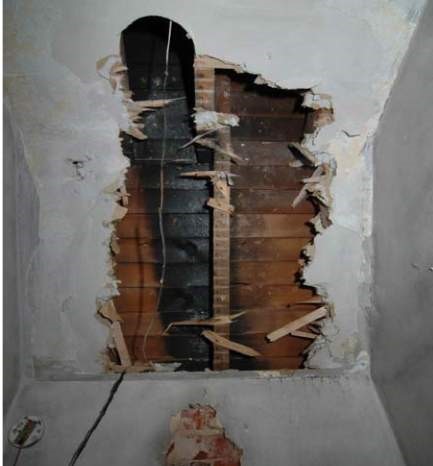 Fig. 8 Close up of fire damage to pitch roof.

The fire was started within an upper-floor bedroom of a three-storey timber frame terraced house; flames spread into an external wall cavity through failure of a uPVC window frame. From there, it spread into a compartment wall separating dwellings.

In this case, the quality of the compartmentation in the roof space prevented more widespread damage as can be seen from the undamaged roof trusses in Figure 9. The compartmentation was formed from two layers of plasterboard either side of the timber frame compartment wall, with all joints fully taped and sealed. 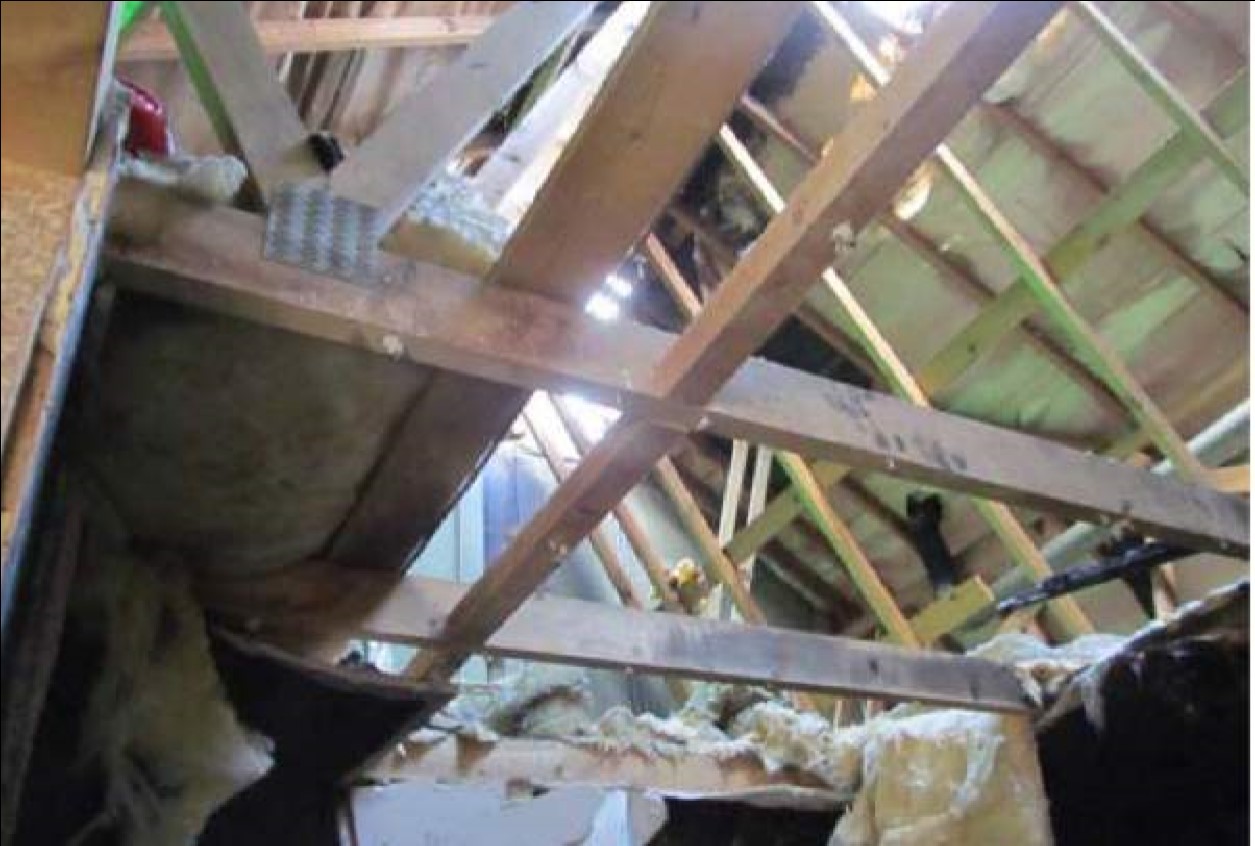 The fire started within a ground-floor flat and spread via the external façade into the compartment wall between occupancies. As with the incident in Case 9, the quality of compartmentation in the roof space, as shown in Figure 10, restricted the amount of damage from the fire. 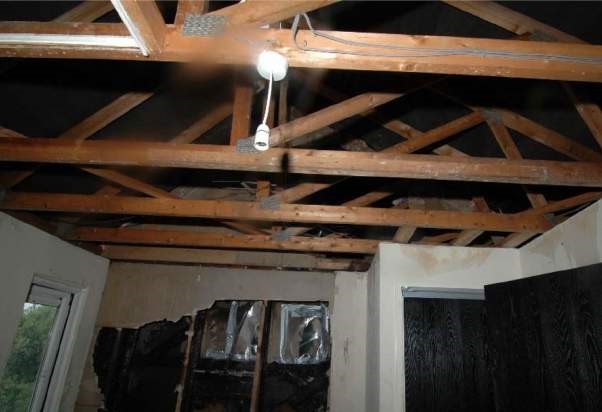 Fig. 10. Top floor of property showing fire damage to party wall but roof trusses are unaffected by the fire due to compartmentation.

DCLG commissioned BRE Global to carry out a research project titled ‘Compartment sizes, resistance to fire and fire safety’. As part of this project, BRE Global undertook a series of full-scale fire experiments within a purpose-built fire compartment within the BRE Burn Hall. The experimental programme encompassed fully-developed post-flashover fires, focused on investigating the influence of high levels of thermal insulation on fire growth, development and space separation between buildings, and fires within an enclosure representative of a basement fire with limited ventilation provided via horizontal openings in the ceiling.

The final experiment in the series used the fire compartment to provide a room on which a trussed rafter roof was constructed incorporating a compartment wall typical of a standard spandrel panel detail used in timber frame construction. The findings from this research programme have been published at http://www.bre.co.uk

The fire protection of concealed spaces is of prime importance because any deficiencies in the installation and materials are not readily apparent and may quickly be covered over. Any inadequacies in such fire protection cannot be observed by the building users and, unlike other engineering provisions within the building, will not be directly apparent by its impact on every-day life. Any inadequacies in the fire protection of concealed spaces will only become apparent during the very time that their effectiveness is required – during a fire. Compartmentation in roof voids is a particular issue with respect to hidden fire spread. The biggest issue remains that of quality of construction. The research presented here and supported by the case studies shows that poor workmanship with inappropriate materials are the main reasons for the inadequate protection of concealed spaces. There is a clear and demonstrable need to ensure that buildings are designed and constructed so that the unseen spread of fire and smoke within concealed spaces within its structure and fabric is inhibited, as required by the Building Regulations. There is adequate guidance available in the public domain to allow this to be achieved. See existing guidance on fire compartmentation in roof voids

It also follows that the fire safety information required under Regulation 38 [9] is essential to those carrying out a fire-risk assessment (under the Fire Safety Order) [10], so that the presence of concealed spaces can be identified and the fire protection they have been afforded can be assessed.

The research on which this article is based was commissioned by the Department for Communities and Local Government (DCLG) and carried out by BRE. Any views expressed are not necessarily those of DCLG, with whose permission the article is published.

This article was written by Martin Shipp, Ciara Holland, David Crowder and Tom Lennon, Building Research Establishment (BRE) Global. It originally appeared as 'Fire in the hole. Designing out fire risk in roof voids' in the Spring 2016 edition of AT Magazine, published by the Chartered Institute of Architectural Technologists (CIAT)

Retrieved from "https://www.designingbuildings.co.uk/wiki/Designing_out_fire_risk_in_roof_voids"
Create an article