We could be on the brink of a demand revolution

When Rio de Janeiro hosted the 2016 Olympics, one in six of the half-million visitors stayed in Airbnb lodgings. Without the additional rooms, Rio would have needed to build another 257 hotels to house those tourists, according to a study by the World Economic Forum.

Beyond the material and environmental savings – not to mention the hotel over-capacity avoided – the visitors generated $25 million in income for their local hosts, spending an average of $136 per day.

By using artificial intelligence technology to manage its already-efficient power use, Google has reduced the amount of electricity it uses to cool data centres by 40%, describing it as a 'phenomenal step forward.'

Developed by DeepMind, a British firm acquired by Google in 2014, this machine learning technology could also help power plants get more energy out of a given amount of fuel, while cutting energy and water use in a wide range of manufacturing sectors. 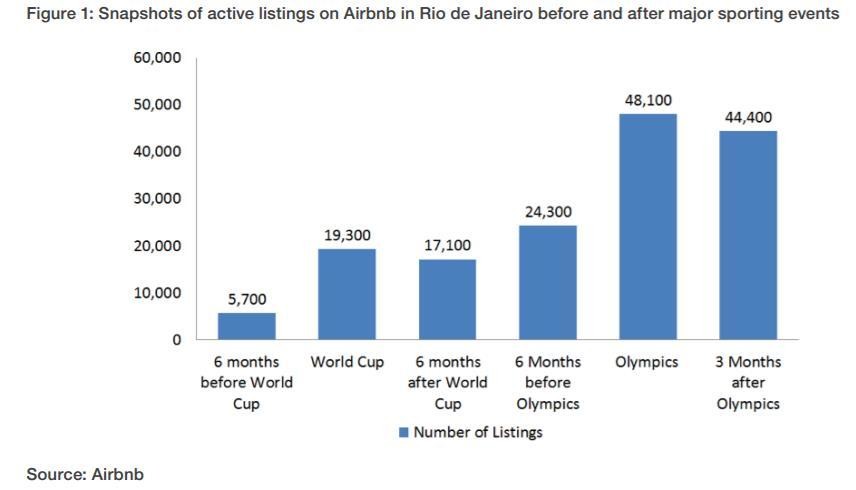 A passenger car is idle 95% of the time. But changes are underway to reduce that waste, and also congestion: in cities such as Mumbai, Delhi and Mexico City, shared vehicles are expected to account for almost half of passenger miles by car by 2030.

These are but a handful of examples showing how economic activities are being reconfigured around the world, with radical implications for the future.

New technologies are combining with new business models to open new avenues to harness opportunities, not only for business actors, but also for sustainability and inclusive growth.

Thanks to advances in computing power, artificial intelligence, and digitalisation, as well as in material science, information technology and product design, concepts which were once only theoretical propositions – such as advanced analytics, cognitive computers, machine learning, operational transparency (through the use of blockchains and smart contracts), hypermobile operations, and experience-based services – are now very much reality.

Not for nothing did The Economist newspaper recently proclaim that 'the world’s most valuable resource is no longer oil, but data'.

These developments also call into question the assumption of ever-increasing demand from an increasingly affluent, growing global population.

Typically, forecasts of future demand are simple extrapolations of the historical relationships between per capita demand for a specific product and per capita income.

The assumption is that, as people get richer, they consume and waste more food, materials or energy, following historical patterns of consumption and business-as-usual trajectories.

It is time to revisit these assumptions.

But new technologies are bridging the gap between producers and individual consumers in many sectors and this, together with big data, creates new ways for consumers to signal their preferences in a far more immediate and informed manner.

Let’s take energy as an example. For much of the last century, energy policy discussions were dominated by concerns over supply scarcity and access to conventional energy supplies at affordable prices.

This led to a focus on the risk of disruptions to the transportation of energy from a small number of oil-producing states to consuming regions, whether through pipelines or maritime choke-points.

Today, concerns over climate change and air pollution have led to rapid growth in renewable power – especially wind and solar, following dramatic falls in their costs.

In May, 2017 the International Energy Agency (IEA) said it would review its electric vehicle (EV) use and oil demand forecasts, after India and China signalled preferences for electric cars and other non-gasoline vehicles.

The rise of renewable power and the drive for electrification means energy security is also about electricity access via interconnected grids and decentralized solutions.

Together they reinforce the importance of data analytics and user interface in the future energy system.

A joule saved is a joule generated, whether it’s because of better windows, or artificial intelligence.

Although fundamental disruptions of the kind being seen in the energy sector do not automatically bring more sustainable outcomes, the good news is that opportunities abound to move collectively into more positive, uncharted territories. The growth of the consumer sharing economy, represented by the likes of Airbnb and Zipcar, is now well-established.

For example, reprocessing aluminium from recycled scrap requires only 5% of the energy needed to produce it from bauxite ore.

Similar savings can be expected in sectors such as recycling paper, steel and plastics.

With growing widespread use of energy-efficient light bulbs, such as LEDs, Goldman Sachs estimates US power consumption for lighting could drop by one-quarter between 2015 and 2020 ­– the first meaningful decline since Edison invented the lightbulb.

These technologies would likely shorten distances between consumers and producers, and could also free up land for forests that yield both climate and clean air benefits.

And as the impact of meat production on both health and the environment becomes the subject of growing concern, there has been a sharpened focus on demand-side options such as changing diets and reducing food waste.

Media attention around alternative proteins, such as lab-grown burgers and plant-based ‘meat’ products, also points to a rapidly evolving sector.

Corporate actors are using their considerable procurement power to build and shape markets for sustainable products.

Since 2014, more than 90 global companies ­– from digital giants Microsoft, Apple and Google and retailers Walmart and Marks and Spencer, to carmakers General Motors and BMW, as well as financial giants Goldman Sachs and Bank of America – have made a commitment to go ‘100% renewable’.

The commitment to no net deforestation from four agricultural supply chains by the Consumer Goods Forum also points to how major companies can drive sustainable practices throughout their value chains.

Of course, no transformation is straightforward, even though the prospect of decoupling resource consumption from economic growth is on the horizon.

Measures designed to incentivise savings, such as energy efficiency, may have the opposite effect if they end up making energy cheaper.

Exciting new materials may be harder to reuse, for example, 3D printing could well lead to a proliferation of unsustainable, disposable products – the environmental equivalent of cat memes on the internet.

For governments and businesses alike, disruptive change is hard to prepare for, with the built environment being a case in point.

There is a clear need for geographically tailored options to decarbonise construction, whether by using alternatives to traditional cement, improved energy efficiency in cement production, and perhaps carbon capture and storage.

But this also raises more questions.

What if new building materials do not deliver more positive environmental outcomes than cement?

And what if novel cements are less structurally robust, and thus require more steel for reinforcement?

Does this not merely displace resource considerations to another sector?

The good news is that in the age of data, remote sensing, and traceability (through blockchains, for example), these worries would likely be overcome.

And machine learning could further help to identify optimal solutions.

Moreover, focusing on cement or concrete production might distract us from significant opportunities to reimagine future urban development.

Can we build cities differently?

Are there opportunities for shared and flexible spaces – as already envisaged for transportation – or to radically reduce energy use?

That the users of buildings could also become more engaged with the design or the environmental performance of those buildings will bring new dynamics.

This is particularly significant for a sector such as construction that is historically quite divorced from its consumers.

Even today, many companies justify their investment plans for future growth based on population and income growth, or using scenarios provided by suppliers of natural resources.

This circular logic only reinforces existing economic models and blinds us to new alternatives, locking us into unsustainable pathways.

But efforts are underway to develop radically different assessments of the future, this time led by companies with an acute understanding of the need to optimise assets to unlock value and enhance customer experience.

In recent years, governments and businesses are increasingly exploring the use of ‘nudges’ in policy-making – with the goal of using behavioural science to enable citizens to better make their own decisions.

Starting in the UK by the coalition government in 2009, these Behavioural Insight Units, or nudge units, have sprung up from the United States and Denmark to Singapore, France and Canada.

Uncertainties aside, policies and measures designed using behavioural science and empirical evidence hold great promise – not least because the success of any policy is contingent not only on its technical potential but also its palatability and uptake.

With the help of behavioural insights and new technologies – through data analytics and optimisation – governments and businesses alike have the opportunities to help shape future consumption decisions towards more sustainable outcomes.

The unfolding of this new industrial revolution will continue to disrupt business models and reorganise global value chains.

Looking to the future, the need for policies and regulatory models that both accelerate innovation and avoid locking in unsustainable resource pathways is clear, not least because it is not easy to predict disruptive change, and disruptions do not necessarily bring better environmental outcomes, or that they could be misused.

Also, riding the wave of these disruptions does not mean abandoning policies and technologies that are difficult to implement.

Getting onto a sustainable pathway requires getting the fundamentals right, and this includes capturing key resource efficiency gains through diffusing existing technologies.

The fundamentals also include environmental standards that encourage the emergence of safe, sound and better alternatives.

Ultimately, the prospect of doing more (and better) with less, holds the key to a more sustainable future, which is unlikely to emerge solely from the interplay of market forces for using idle cars, empty apartment rooms or technologies to make energy use more efficient.

To harness the potential of meeting future needs with less, and to capitalize on the alignment of technologies, new business models and consumer preferences requires new forms of collaboration between governments, cities, businesses, labour, and civil society.

It also necessitates diligence and openness on the part of stakeholders, and a redesigning of policies and planning processes to enable the most sustainable and equitable options to become the new business-as-usual for our growing population.

This article was originally published by the Hoffmann Centre for Sustainable Resource Economy based at Chatham House.

Retrieved from "https://www.designingbuildings.co.uk/wiki/We_could_be_on_the_brink_of_a_demand_revolution"
Create an article