3 ways the fastest growing economies can close the infrastructure gap

[edit] How much does it cost to power the world’s fastest growing economies?

The Asian Development Bank (ADB) estimates that the Asia Pacific region requires US$1.7 trillion of infrastructure investment every year until 2030 just to maintain its current rate of growth.

Spending US$26 trillion over the next 13 years may seem an incredible burden, but it is also a unique opportunity to reframe the narrative of inclusive development.

In Asia, there is a new breed of multilateral institutions – in particular the Asian Infrastructure Investment Bank (AIIB) – in addition to the established practitioners of development assistance, such as the World Bank, the European Union and the Asian Development Bank (ADB). 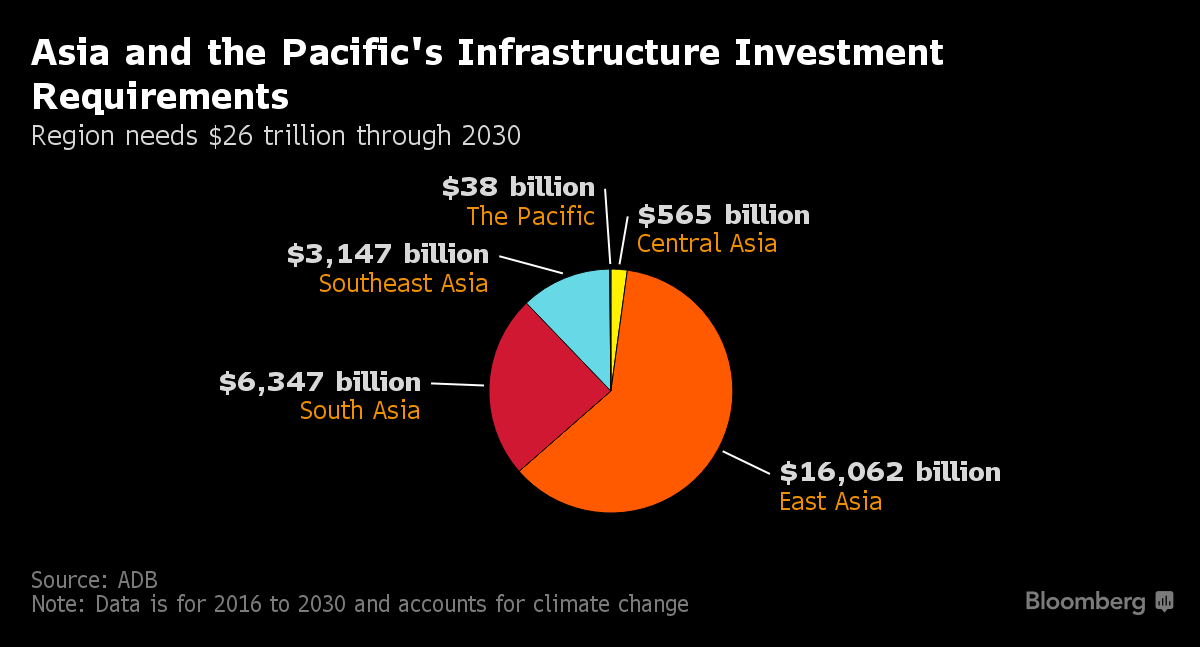 The challenge that all these institutions face, whether old or new, is to create infrastructure that serves the innovation economies of the future.

In addition to typical hard infrastructure, such as fixed electricity pylons that provide power or transport links to open up new markets, the ADB anticipates demand for 'telecommunications, and water and sanitation infrastructure'.

We can add to this the demands of a new context in which any major infrastructure strategy means more than removing barriers to economic growth. The new context reflects the importance of sustainable development in response to three major transformations occurring in the global economy, as noted by the UK’s recent Industrial Strategy review:

Whatever our approach to the infrastructure gap, we must recognise its global implications.

The world feels the effect of any slowdown in Asia’s tiger economies, so everyone has a stake in the success of this new breed of multilateral institutions, a fact noted by the AIIB’s vice-president Danny Alexander: “Asia is the fastest-growing part of the world economy. Infrastructure is not just important to Asian countries. That is why I think you have so many non-Asian countries who have joined the bank.”

Here are three steps that Asia and its development institutions can take to stay ahead of the curve.

[edit] Don’t forget inequality and the other industrial revolutions

Acknowledging the global infrastructure gap also means acknowledging that the second and third industrial revolutions, those of electric and digital power, are still unfolding in some parts of the world.

Nearly 1.3 billion people still lack access to electricity, and more than half of the world’s population still lack internet access. While the possibilities of the Fourth Industrial Revolution are exciting, we must not neglect the primary infrastructure – such as basic sanitation and clean water supplies – still essential to the quality of life and economic prospects of millions.

As the World Bank notes in its 2016 Digital Dividends Report:

“The poorest households are more likely to have access to mobile phones than to toilets or clean water.”

This illustrates the limits of the leapfrogging concept, which posits the idea that a developing country can skip the intermediate technologies that advanced economies had to adopt in the course of their development, such as fixed landlines and electricity pylons, and go straight to the most modern technologies, such as smartphones.

As the report indicates, the extent of the diffusion of new technologies and their associated benefits for education, economic growth and society as a whole are determined by the availability of older infrastructure from previous revolutions, as well as the extent to which communities are prepared to use and maintain this infrastructure.

For example, if Asia wants to continue its tremendous progress in lifting millions out of poverty (from 60% in extreme poverty in East Asia in 1990 to under 5% today), it must plan its infrastructure development not only to prepare its workforce for an innovation-driven economy, but also to give more girls a quality education. 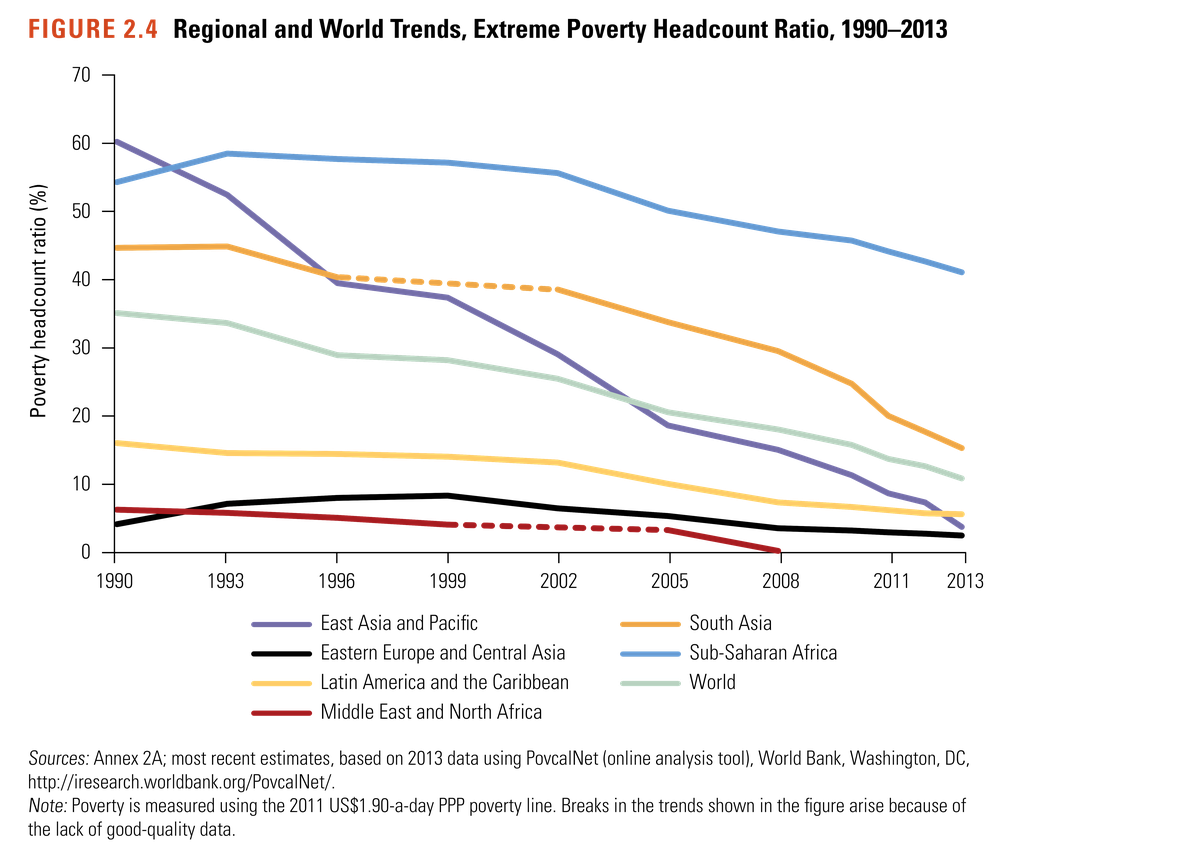 Central Asia, in particular, has a significant educational attainment gender gap, and the World Economic Forum projects that at current rates of change it will take 87 years to achieve education parity.

To address these gaps, projects that implement the basic infrastructure required to optimise school attendance for young girls – such as hygiene, water and sanitation facilities – are just as important as projects that focus on improving digital literacy.

To implement these new cooperative development frameworks, civil society organisations will be an important bridge between large development banks, private sector players, government leaders and communities on the ground.

For example, two Rotary International-USAID grant projects in the Philippines aimed to overcome the obstacles of the country’s complex, decentralised and fragmented water supply and sanitation sector through implementing a sustainability index methodology.

The index considers 'four main factors that are known to have an impact on sustainability: institutional arrangements, management practices, financial conditions, and technical operations and support.'

The projects put mechanisms in place to try and ensure the sustainability of future projects, enhancing knowledge of weaknesses in any of the four key factors that infrastructure strategists at all levels can address.

Using the expertise of local NGOs and consulting local populations can encourage the most sustainable infrastructure improvements, instead of falling into the trap of tactical stopgaps for systemic problems, such as – in the case of water infrastructure – installing a new hand pump without any follow-up training or maintenance.

[edit] Prepare for an ageing population

By 2030, the world will have 34 ‘super-aged’ nations in which more than one in five of the population is 65 or older.

Across the world, the population is ageing – and development must take this into account 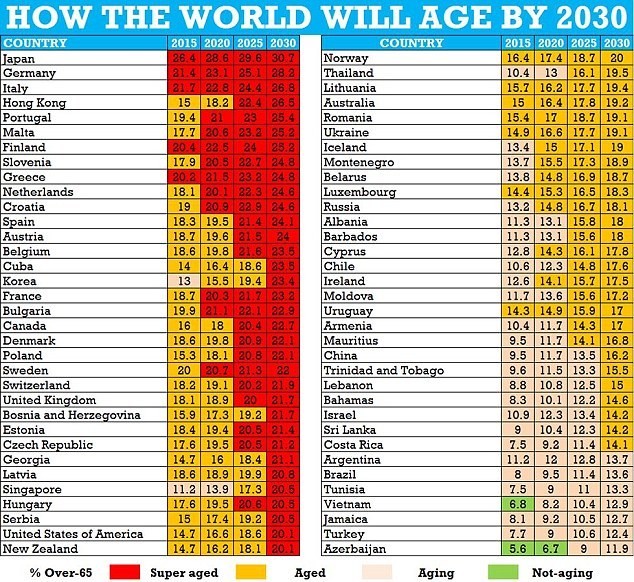 Asian nations at different stages of growth are part of the list of ageing nations, including Japan, Singapore and South Korea (super-aged), and China and Thailand (ageing). This places further demands on national infrastructure.

Governments can make structural reforms to counter the expected slowdown in economic growth which results from an ageing population. For example, Changyong Rhee of the International Monetary Fund’s Asia and Pacific Department recommends a series of measures including immigration reform, retirement age extensions and maximising labour market participation.

Those over 65 can also stay active and productive in many other ways. An experimental project run by a government-supported non-profit in Belgium is attempting to reduce unemployment among young migrants. The scheme matches migrants with local retirees who used to work in their field of employment interest. The retirees advise the youngsters and make connections with suitable employers.

It also makes financial sense, according to the Centre for Social Impact Bonds: “Should one-third of the participants find employment who otherwise wouldn’t, the state could realise savings of around €2m, a figure over eight times higher than the initial cost of the intervention.”

Although the sums needed to address regional infrastructure gaps may appear daunting, allowing innovation and the local understanding of both civil society organisations and the private sector will help to ease the burden.

Addressing the infrastructure gap requires an approach which emphasises sustainability, multi-sectoral, localised collaboration, and a strategic – rather than tactical – response to the effects of the Fourth Industrial Revolution and the reality of ageing populations in growing and advanced economies. Asia, home to many of the world’s fastest-growing nations, will be a vital testing ground for the best ideas to create sustainable, inclusive infrastructure.

Retrieved from "https://www.designingbuildings.co.uk/wiki/3_ways_the_fastest_growing_economies_can_close_the_infrastructure_gap"
Create an article