The Medical Research Council’s Laboratory of Molecular Biology (LMB) building in Cambridge was completed in November 2012 and opened by The Queen in 2013. The building was designed for an occupancy of 440 bench scientists and around 160 support staff. 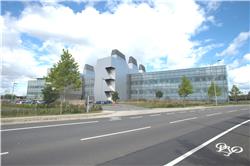 This large (32,000m2) building, divided between three main floors, was designed to support the LMB’s programme of scientific research for the next 50 years whilst encouraging interaction and collaboration across the scientific staff - with a large atrium and airy walkways, breakout areas and a spacious staff restaurant. The building was designed by RMJM architects, and built by BAM construction. The M&E consultants were KJ Tait and RMF Engineering Inc. (Baltimore).

The building’s special features include:

The main drivers for this project were to provide state-of-the-art facilities to some of the world’s leading scientists and to create high quality and friendly interaction areas in which innovative research and collaboration can thrive. To do this, a building services-led design was adopted to provide research facilities with engineering solutions capable of providing the specialised environmental needs of individual labs without disrupting adjacent research activities.

The early briefing for this project was completed entirely in-house through discussions among the client’s Directors, MRC advisors, designated experts and user group. In-house Soft Landings Champions (Client Requirement Co-ordinators) were appointed by the client to help better inform decisions made throughout the project and draw attention to the client’s needs and expectations. The brief was then validated by the design team and translated into the building design documentation.

A key element of the brief was the requirement for the building to be provided with full height interstitial service voids above each of the laboratory areas to enable the services to be located laterally between the floors. This approach allows the services to be modified and maintained without need for access or disruption to the laboratories and work areas below.

During the construction period, the architectural drawings were translated into Revit to produce more accurate 3D views of the laboratory plans. This allowed architectural production design information to be used with the 3D Cad-duct mechanical services to help regular checking for errors, undertake clash detection and to ensure client needs were met.

The project team, including the client and the Soft Landings Champion, had regular meetings at key points during the design and construction stages to discuss project progress and address design problems. At the end of each stage, all the design information was presented to the end users and MRC’s internal advisors (including Health and Safety, Estates and IT Departments) to update them on project progress and ensure their requirements were being satisfied by the developing design.

During the building commissioning period, the Soft Landings Champions were based on site and played a key role in monitoring the construction delivery with the client’s Project Managers (AECOM) and independent professional advisors (Jacobs Engineering). The Soft Landings programme ensured that the LMB’s Estate’s team were invited to attend all the system witnessing to get a thorough understanding of system controls and operational performance. The Estate’s Team were also issued with a “pocket-sized” booklet that described the design intent for all the M&E Systems prior to the operation and maintenance (O&M) information becoming available to help improve familiarity with the new building’s plant.

A 4-week comprehensive training programme was provided for the Estates and Facilities manager, the Estates Team and the Lab Managers prior to the handover stage. The training was conducted through hands-on site visits and remote presentations. All the training sessions were digitally recorded for future use.

As soon as the building’s fabric was completed, the scientists were given the opportunity to visit the site to get a feeling for where they were going to work. Immediately post-completion a dedicated Soft Landing team was put in place consisting of control engineers, M&E engineers, Commissioning Engineers, the LMB’s Estates Services Co-ordinator and the Soft Landings Champion. The team worked together on-site for 6 months after practical completion (PC) to assist the client and occupants during the early stage of operation. The team used a dedicated control room in the centre of the building where they had access to the BMS, for fine-tuning, controls snagging and to act as a helpdesk for occupants to raise any questions about potential issues with their working environment.

Although at the handover stage, the BMS was providing robust and stable system operation, many of the more detailed system settings needed to be adjusted manually to improve stability. For example, it was noticed that there was a lot of missing system performance data due to too much unnecessary polling traffic on the BMS network. This issue was solved during the fine-tuning period.

While a BSRIA Soft Landings approach recommends a Building Use Studies (BUS) survey should be conducted at least a year after occupancy, a BUS survey was conducted after six months. Although, overall, the respondents to the survey reported that they were very satisfied with their new building, the survey provided some useful insights into areas of building performance that needed to be improved.

The Soft Landings project used this feedback to focus on early improvements that needed to be made to the building, including looking at increasing internal humidity levels using the heat recovery wheels and reprogramming the air handling units, making modifications to the lighting control system to improve the response of the lights to fluctuating daylight levels and upgrades to the automated blind system.

While the concept of a “golden thread” (as often captured in Soft Landings projects) through the design, construction and operation of the building was written into many original project documents, the extended aftercare was not originally part of the project plan and no specific budget was considered for it. However, during the construction phase it became clear to the MRC and BAM that a Soft Landing was vital to the successful delivery of the building and both parties extended contracts to include initial on-site aftercare.

The last part of the Soft Landings project is a final three year post occupancy evaluation (POE). As well as ensuring the scientific requirement is being met by the building, the POE will focus on identifying ways of improving building system efficiencies without adversely affecting scientific operation. Energy-related data has been collected and the building system performance is being evaluated.

The total cost of this project was about £212 million.

This article was created by --BSRIA

Retrieved from "https://www.designingbuildings.co.uk/wiki/Medical_Research_Council_Laboratory_of_Molecular_Biology_soft_landings_project"
Create an article