In September 2015, BSRIA published Building Performance Evaluation in Non-Domestic Buildings Guide – an introduction to the tests and methods in non-domestic buildings. 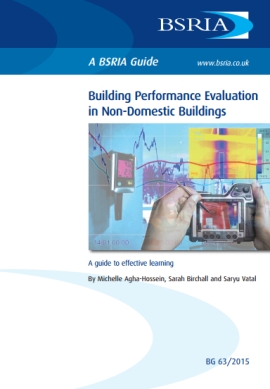 The guide provides a general introduction to Building Performance Evaluation (BPE), explains why it is important and how it can be carried out. BPE is a form of Post-Occupancy Evaluation (POE) which can be used at any point in a building's life to assess energy performance and occupant comfort and to make comparisons with design targets.

BPE is a key element of the BSRIA soft landings framework intended to help deliver buildings that are effective and efficient and perform as expected. The guide focuses on new, existing and refurbished non-domestic buildings and aims to inform those involved in the design, construction, operation and/or management of a building about its current performance.

The guide discusses some of the tests and methods that can be included when reviewing building performance to provide information about:

It suggests that the following factors should be considered when structuring a BPE study:

Catherine England, BSRIA Marketing Officer, said: “Despite genuine intentions to develop efficient buildings, the construction industry is still missing the mark. Recent research from academia and industry has shown that buildings do not always perform in the way that was originally intended. This results in inefficiencies in energy performance, and occupant dissatisfaction. BPE is the process of evaluating how a building performs and can be used on both new and existing buildings in order to address these issues. The publication captures this process.”

NB BSRIA suggest that, “Post-occupancy evaluation (POE) constitutes the activities of the BPE process once the building is occupied and in use, focussing on the operational performance and the occupants of the building. It is important to know to what extent the building maintains its occupants’ satisfaction and perceived comfort. To do this in a systematic and structured way, post-occupancy evaluation (POE) can be employed as a major part of BPE. This would involve collecting feedback (soft data) from the occupants through survey questionnaires, interviews and / or workshops, ideally at least one year after building occupation to cover at least on seasonal cycle.