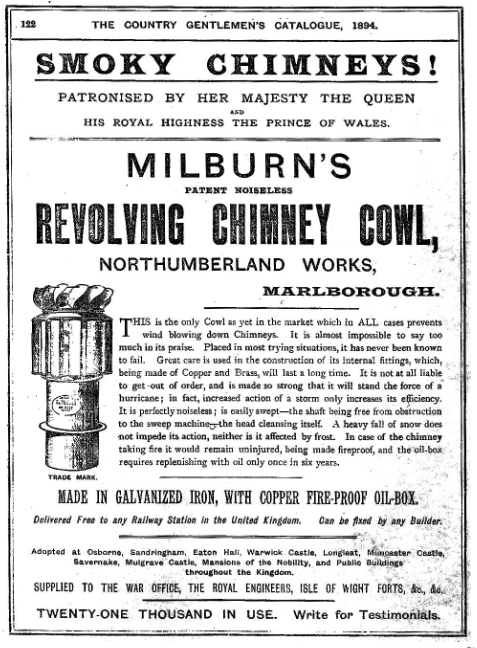 Fixed cowls were placed at the top of a chimney, like a hat, with slots to allow smoke to be released but prevent water or rain from entering, however, these cowls could not prevent driving wind which sometimes caused a down draft potentially blowing some dust into rooms. It is said that Charles I granted a patent to the inventor of a rotating ‘smoke cure’ during his reign, between 1625 and 1646 AD, this became known as a wind cowl, which was fitted as an add-on to prevent wind causing a down draught in the chimney, blowing back the smoke into the room. References to ‘creaking arrangements on the chimney’ appeared earlier than the patent and Prince Albert is said to have supplied his own engineering input to the chimneys of Osborne House, Isle of Wight, in the late 1800s.

It was in 19th century that smoke cowls became established as an industry in the south of England. They were embraced by the Victorians for their practical value and decorative potential, with an array of different designs being crafted, sold, and installed,

In 1829, George Ewart produced ‘The Empress’ which was exported across the British Empire although, it was sometimes less for reasons of smoke alleviation than for general ventilation. This design continued until the 1930s when its successor, ‘The Emperor’ took its place until 1956, when the firm making them finally ceased production. During that time G.A. Harvey of Greenwich and F. Braby of Fitzroy Square, London produced a selection of wind cowls, amongst which ‘The Brighton’ was the most popular.

The greatest success in the field came in 1873 in Marlborough, when Joseph Milburn patented an elegant cowl with carefully specified bearings. This was a slightly complex situation, as two other people also laid claims to the design. Milburn, however, was able to influence the powerful and wealthy by encouraging the Marquis of Ailesbury to use a number of his cowls on his mansion called Tottenham House in the Savernake Forest. Recommendations to the nobility and gentry soon followed, resulting in the cowls being installed on nearly every large house in the country. The situation was simplified commercially when Queen Victoria granted Milburn a royal charter and Lord Bath wrote personally praising ‘The Milburns’ efficiency.

Milburn’s biggest customer was Lord St Levan. Every two years a cartload of cowls would arrive at Marazion, opposite St Michael’s Mount, Cornwall where he lived and where the winds used to remove the lids of other cowls and blow them into the sea. The Milburn was the only cowl that could withstand the harsh weather and remain effective. They were generally 6 feet high and between 8 and 12 inches in diameter and made of galvanized iron or unpainted copper. Each cowl had a brass plate riveted to it, carrying its details and serial number. From 1873 each cowl’s date of despatch, destination, modifications, and specifications with drawings and details were entered into the company’s ledgers. Over 55,000 entries were made between the firm starting up and the last recorded serial number. Ownership changes in 1960 led to the disposal of many documents - now lost forever.

Three firms in Brighton dominated the cowl industry, developing various styles and designs for transportation and installation around the UK and even abroad. The town itself developed an impressive skyline of ‘tin hats’ (as they were affectionately known) with areas of the town embracing different styles. ‘Lobster Backs’ were popular in Hove and the revolving ‘Hovel’ successful in Kemptown, where tall buildings often blocked intermediate chimneys. ‘The Brighton’ and ‘Vertical Rotary’ appeared almost everywhere. Other types of cowl, including fixed non rotating ones, were installed to satisfy particular needs around the town - the ‘Bent-T’, ‘Drumheads’, ‘Cheeseman’s Cowl’ and ‘Dr Arnaud’s Head’ were all part of the Brighton skyline at that time.

Well into the 1950s, one of the most efficient of all traditional cowls was still being produced in Europe and the Americas. ‘The Archimedean’, with its rotating bladed head-turning an archimedean screw in the shaft, had the ability quickly and efficiently to remove large quantities of air containing floating substances. It was much used in cotton mills and similar large dusty factories and was the last survivor of the original crafted cowls of the Victorian age.

The ‘Colt cowl’, based on a 19th century original, then displaced many of these traditional cowls and today commercial internet sites advertise it at around £70 but it is a poor relation to the crafted cowls of the Victorian age. Other cowls, such as the cheap and simple ‘Rain Top’ advertised at £20, are still being bought and installed on homes. The more successful ‘Aspiromatic’ is a 20-bladed rotating steel globe, that spins on many chimneys in Britain and Europe and is similar to the original Archimedean. Products called Aspiromatics are still sold at around but how they compare to those originals still seen on houses in Brighton is unclear. The original Aspiromatics were magnificent works of craftsmanship and engineering, having one of the highest rates of smoke extraction for any cowl.

The increasing severity of air quality issues in many major cities and the great smog of 1952, induced by both weather and pollution, where an anticyclone settled over London, a high-pressure weather system that caused an inversion whereby cold air was trapped below warm air higher up and emissions of factories and domestic fires could not be released into the atmosphere and remained trapped near ground level. It was one of the worst pollution-based fogs causing thousands of deaths and by the middle of the Century parliamentary legislation (the Clean Air Acts of 1956 and 1968) outlawed the burning of coal, and even offered grants to switch to different heating sources, such as oil, natural gas, and electricity. As a result, the need for the sale of wind cowls reduced dramatically.

Today many large towns and cities, still have smoke bans and so the demand for cowls is nothing like that of Victorian times. In most cases, Cowls are fixed and used at wall penetrations and boiler flues to allow gases and heat to exit. Rotating cowls may in some cases still be used in situations where air or fumes need to be gradually extracted from an internal space. However, increasngly this might be mechanically driven rather than naturally driven.

In some cases, natural ventilation strategies for buildings may also have high-level vents near glazed areas to raise temperatures high up and make increased use of the stack effect. As the air gets warmer it becomes less dense and so more buoyant with a tendency to rise. This effect can be used to naturally ventilate buildings. Cooler outside air is drawn into buildings at a lower level, it is warmed by sources of heat within the building (such as people, equipment, heating and solar gain), then rising through the building to vent out at a higher level and draw fresh air in.

The beauty of the rotating wind cowl however is that it harnessed the cause of a problem for its solution. In so far as the wind causes the down draught in a chimney, making the interior hazardous, the cowl intervenes between the open chimney, the smoke, and the exterior wind. The design relies on the wind and the heat of the fire to rotate the cowl and dissipate the smoke away while preventing that same wind from entering and causing a down draught. The cowl has the characteristic of adaptability in that, as an ‘add-on’, it can be fitted to any house with a chimney. Though different types and sizes of cowl are selected for different conditions and requirements, it has the qualities of universality, standardisation and decorative interest.

One very modern interpretation and adaptation of the traditional wind cowl was invented by Bill Dunster, the Architect of the UK's first eco-village, located in Wallington, South London, and occupied since March 2002. This multi-award-winning development was initiated by Bio-Regional, developed by the Peabody Trust in partnership with Bio-Regional Development Group, and designed by Bill Dunster Architects (now Zedfactory). One of its key and most recognisable features are the brightly coloured rotating heat exchange ventilation wind cowls.

Images of Bedzed can be found on the Architects' website https://www.zedfactory.com/bedzed

The scheme comprises of 82 properties, community facilities, and a visitor centre and was one of the earliest pioneer projects built to address the environmental impacts of construction. It showcases solutions through various sustainability features, in particular, super-insulation, airtightness, heat recovery, and sun-spaces as well as local material sourcing, energy production and wastewater treatment, and re-purposed an area of contaminated land.

As part of the energy efficiency strategy, BedZed uses a wind-driven natural ventilation system where outgoing stale air preheats incoming fresh air through a heat exchanger located on wind cowls, found on the roofs. The wind cowls can rotate therefore harnessing even very weak breezes and through this system, inhabitants can breathe fresh air that is devoid of pollutants that would otherwise be incorporated into the air in the ventilation systems. This system allows the air ventilation to be controlled and implemented so that a clean internal environment is achieved.

The Dunster cowl has been tested and said to achieve around 70% heat recovery rates, without electrically driven fans. The cowls have been used on a number of buildings designed by the practice, quite often with slight variations. For more information visit the architect's website Zedfactory.

Grateful thanks to John Redfern RIP for his passion and enthusiasm for wind cowls.

Thanks also to Bill Dunster for a practical working education into all aspects of environmental design.

Retrieved from "https://www.designingbuildings.co.uk/wiki/Wind_cowl"
Create an article