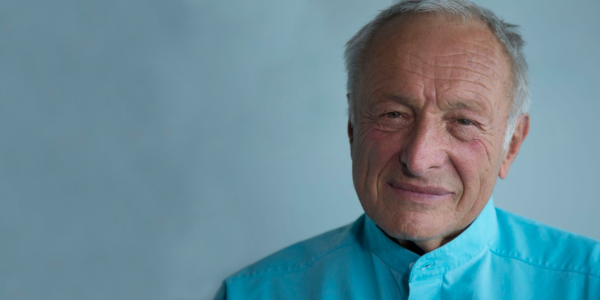 In December 2018, Richard Rogers, Founding Partner at RSHP, has was awarded the AIA 2019 Gold Medal. The Gold Medal is the AIA’s highest annual honour, recognising individuals whose work has had a lasting influence on the theory and practice of architecture.

From the Centre Pompidou in Paris to New York City’s post–September 11 skyline, the work of Richard Rogers, Hon. FAIA, has influenced architectural conversations and helped redefine an architect’s responsibilities to society. Rogers’ commitment to our cities, environment, and humanity has resulted in a wealth of honours, while cementing his place in architectural history.

“He is the quintessential builder, committed to mastering the craft and technology of construction, harnessing it towards efficient buildings, and forging an expressive architectural language,” wrote Moshe Safdie, FAIA, in his support of Rogers’ nomination for the Gold Medal. “Before it was fashionable, he was an environmentalist, who recognized early in his career the challenges of energy and climate, developing innovative solutions.”

Born in Florence and trained as an architect in London and, later, at Yale University, Rogers’ outlook on the profession is as urbane as his early life and education. The Centre Pompidou, one of his earliest projects—and one he designed with Renzo Piano, Hon. AIA - boasts themes that have become trademarks in Rogers’ architecture since the mid-1960s. Structure, technology, and an eschewing of monumentalism commingle in what was envisioned as a cross between “an information-oriented computerized Times Square and the British Museum.” The project shifted views on museums from elitist establishments to sites of social and cultural exchange deeply embedded in the heart of cities. Since then Rogers has proven himself as visionary a planner, urbanist, advocate, and humanist as he is an architect. In London, which arguably bears his strongest imprint, his plan for the city and life after the 2012 Olympics is a testament to his thoughtfulness, having survived the terms of two mayors with only minor modifications.

“Richard Rogers is a friend, a companion of adventures and life,” wrote Piano in his support of Rogers’ nomination. “He also happens to be a great architect, and much more than that. He is a planner attracted by the complexity of cities and the fragility of earth; a humanist curious about everything (from art to music, people, communities, and food); an inexhaustible explorer of the world. And there is one more thing he could be: a poet.”

Through his guidance and vision, London–based firm Rogers Stirk Harbour + Partners, tackles projects that invigorate the environments they inhabit. Echoing the ideals found in the firm’s guiding constitution, the melding of craft and social mission resonate within every project. At New York’s 3 World Trade Center and Madrid-Barajas Airport, Rogers’ mastery of large urban buildings and his unique brand of architectural expression are on full display. Every project is meant to engage its inhabitants and users in deep conversations about how we use and perceive space.

Rogers has been celebrated with nearly every major architectural honour, including the 1985 RIBA Royal Gold Medal, the 2007 Pritzker Architecture Prize, and the RIBA Stirling Prize in 2006 and 2009. He was named a Praemium Architecture Laureate by the Japan Art Association in 2000 and was knighted by Queen Elizabeth II in 1991. He has sat as a Labour peer in the House of Lords since 1996.

“We know that architecture is a discipline of enormous political and social consequence,” Lord Peter Palumbo of Walbrook wrote of Rogers. “And today we celebrate Richard Rogers, a humanist who reminds us that architecture is the most social of arts. Throughout his long, innovative careers, Rogers shows us that, perhaps, the architect’s most lasting role is that of a good citizen of the world.”

Richard Rogers commented, “I am delighted to receive the AIA Gold Medal. The evolution of architecture in America has been pioneering, from the Prairie House to the Skyscraper, which has influenced architecture around the world. Technology has been at the forefront of this innovative spirit always promoting great design. I have learnt and embraced this approach since my time as a student. Above all, architecture is a collaborative process. I have been supported by many extremely talented people over the years – from the early days with, Renzo Piano, Norman Foster, Peter Rice, John Young, Laurie Abbott, Mike Davies to more recent years with Graham Stirk, Ivan Harbour, Andrew Morris, Lennart Grut and all at RSHP. Most importantly, I couldn’t have achieved this without the support of my wife Ruthie and children.”

Over a career that has spanned five decades, Rogers has been the personification of an ideal architect: an incredibly talented designer whose work has had profound and lasting impact on the people and communities he has served.

This article originally appeared at: https://www.rsh-p.com/news/lord-richard-rogers-hon.-faia-recipient-of-the-2019-gold-medal/

Retrieved from "https://www.designingbuildings.co.uk/wiki/Richard_Rogers_wins_the_AIA_2019_Gold_Medal"
Create an article