The design concept involved ‘liberating’ the court-rooms from the ‘box’. The timber-clad solution employs a mix of high technology, computer-controlled machinery and traditional craftsmanship.

Richard Rogers Partnership (RRP, now Rogers Stirk Harbour + Partners, RSH+P) won the international competition to design new law courts for the historic city of Bordeaux in 1992. The design was for a building that would, through a feeling of transparency and openness, create a positive perception of the accessibility of the French judicial system. The brief was complex, requiring complete separation of public and judicial circulation. By pulling the building into its constituent parts, the resulting transparency encourages a sense of orientation, rendering an historically imposing institution more accessible.

Key elements of the design include the creation of public space and integration with the existing urban landscape. Public entry to the building is via a flight of stairs placed to the side, leading to the ‘Salle des Pas Perdus’ at the core of the building, where lawyers, their clients and the public meet.

The seven courtroom pods are clad in cedar, raised on pilotis above the limestone plinth within a great glass curtain wall under an undulating copper roof. The administrative offices are reached by bridges spanning the atrium – the clarity of the plan ensuring that different secure routes across the atrium are maintained both for the public and for magistrates. With its use of irregular forms and natural materials, the building successfully complements its sensitive environs, including a section of the city’s medieval wall. A strong emphasis is placed on effective passive control systems. The pods are shaded beneath the great roof and manually-operated brise-soleil windows along the western façade reduce solar gain. The flask-like volumes allow daylight deep into the court rooms and, through their height, ensure temperature control through stratification. The glazed box wrapping around the chambers, with its sun-screening and ventilation systems incorporated within the roof, functions as a breathing container. In addition, the podium and offices are built in concrete – a very effective passive heat control system. 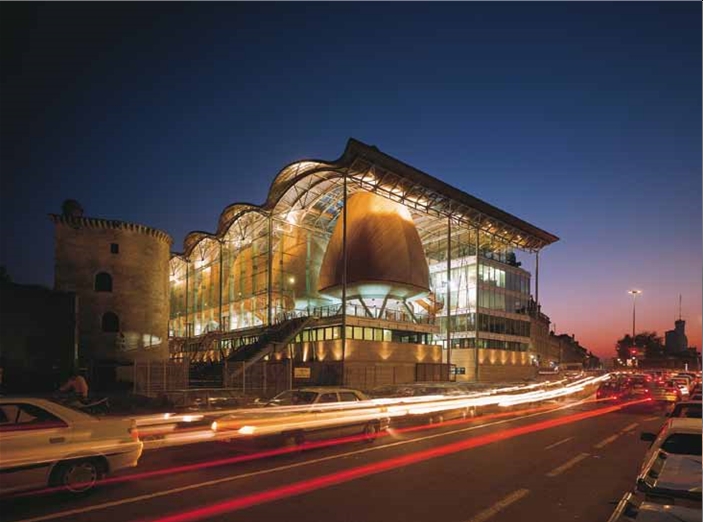 Retrieved from "https://www.designingbuildings.co.uk/wiki/Bordeaux_Law_Courts"
Create an article