The site has a powerful presence, with uninterrupted views over Cardiff Bay. The resulting building, with vistas of sky and water, looks outwards to Wales and beyond.

The election of the Welsh National Assembly in 1999, was a turning point in the history of Wales. Its home, Cardiff’s former docklands, is a striking addition to the local scene and a statement of faith in the regeneration process. The Assembly building embodies democratic values of openness and participation, while its progressive environmental agenda establishes a new standard for public buildings in Britain.

The setting is the Pierhead, once the centre of the coal exporting trade. Nearby are the Grade I listed Pierhead Building and the new Wales Millennium Centre. The idea of openness is exemplified by the transparency of the building. Public spaces are elevated on a slate-clad plinth and cut away to allow daylight to penetrate the administrative spaces at lower level. A light-weight, gently undulating roof shelters both internal and external spaces, pierced by the protruding extension of the Debating Chamber.

A large circular space at the heart of the building, the Chamber is defined by the dramatic roof which is drawn down from the roof above to form the enclosure. The Assembly also includes exhibition and education spaces, a café, committee and meeting rooms, press facilities, offices for the principal officers of the Assembly and a members’ lounge.

The servicing strategy responds to the varying demands of the internal spaces – air-conditioning is supplied in the debating chamber, while the public lobby is naturally ventilated. Heat exchangers capitalise on the potential of the ground as a cooling mechanism, while the thermal mass of the plinth tempers fluctuations in the internal environment. In this way, the design achieves significant energy savings compared to traditional buildings.

Hard landscaping, together with a canopy of trees, creates a close for the Assembly and completes the jigsaw of new development in this part of Cardiff Bay. 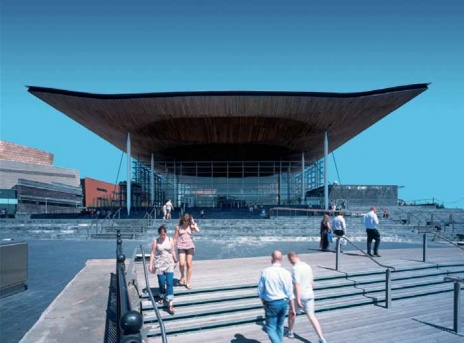 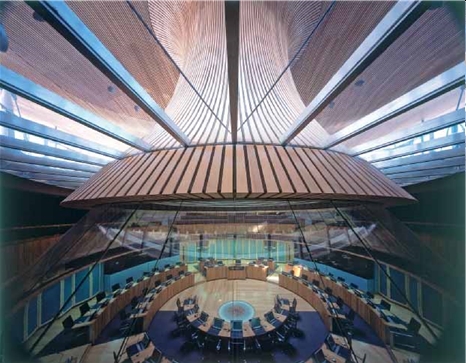 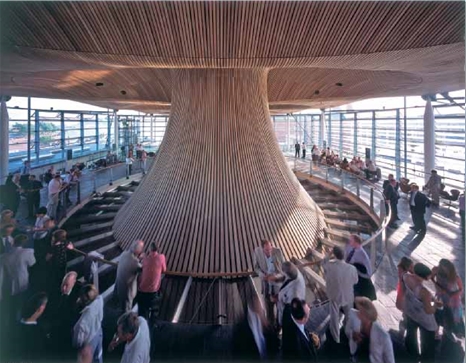 Retrieved from "https://www.designingbuildings.co.uk/wiki/National_Assembly_for_Wales"
Create an article