"Despite the building’s mass, we created a structure that was sympathetic to the scale of the city. The result is a long, low building with a roofscape animated by the hearing rooms."

The new law courts for the Flemish city of Antwerp is one of the Richard Rogers Partnership’s (RRP, now Rogers Stirk Harbour + Partners, RSH+P) major public buildings of the early 21st century. Like many projects by the practice, it reflects a vision of the city as a humane and democratic place with a commitment to the regeneration of urban life.

The site for the law courts is at the Bolivarplaats, on the southern edge of Antwerp’s central area, where the urban fabric is broken by a massive motorway interchange, cutting off the boulevard that leads into the city. The building is one of the catalysts for RRP’s long-term masterplan of ‘the new south’ of the city.

The new building, designed in conjunction with Belgian architects VK Studio, is conceived both as a gateway to the city and to provide a link across the motorway between the city centre and the Schelde River. It houses eight distinct civil and criminal courts and includes 36 courtrooms plus offices, chambers for judges and lawyers, library and dining room, with a great public hall (the space traditionally known as the ‘Salle des Pas Perdus’) linking six radiating wings of accommodation. This space is capped by a striking roof structure, crystalline in form, rising above the paraboloid roofs that cover the courtrooms.

A low-energy services strategy is fundamental to this project – natural light is used to optimum effect, natural ventilation is supplemented by low-velocity ventilation for the hearing rooms and rainwater is recycled.

The building, straddling a major highway, looks out to a large area of parkland – the design creates ‘fingers’ of landscape that extend right into the heart of the building. The landscape is configured and planted to shield the building from the noise and pollution of the motorway. 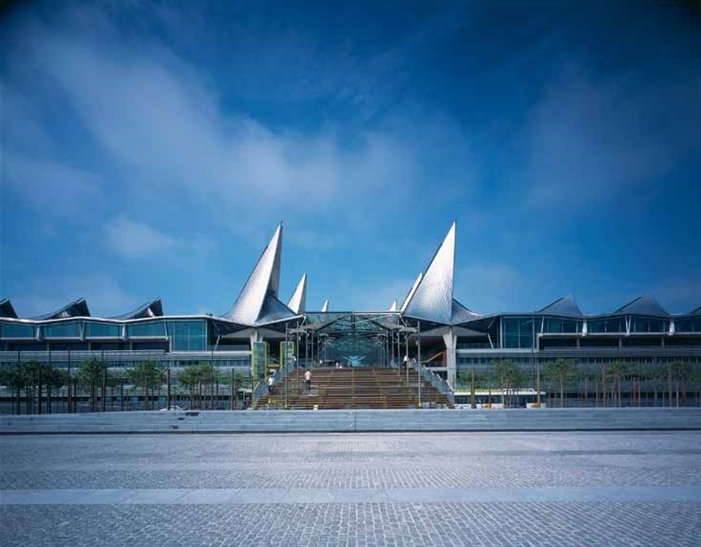 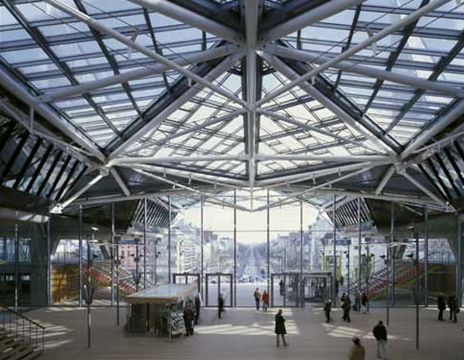 Retrieved from "https://www.designingbuildings.co.uk/wiki/Antwerp_Law_Courts"
Create an article