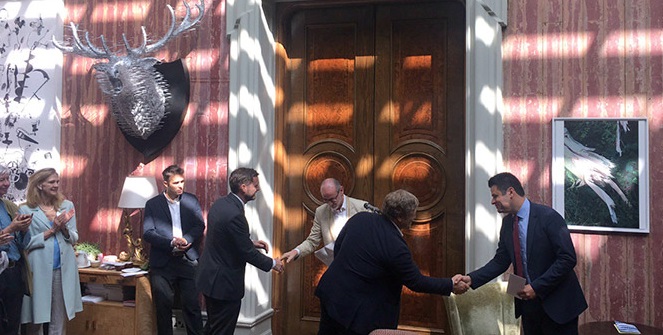 The £10,000 prize for an outstanding work of architecture, which they shared with a team from Herzog & de Meuron, was awarded in a ceremony at the Royal Academy in London.

2017’s architecture room at the summer show was curated by Farshid Moussavi, and focused on construction co-ordination drawings. Bahadir Kayan, one of the judges, said: “Moussavi’s call for construction co-ordination drawings brought together an outstanding show that unveils the unseen beyond models and images. Congratulations to RSHP and Herzog & de Meuron, who go to share the prize this year, for their outstanding submissions.”

Speaking after the team received the award, Douglas Paul, an architect at the practice, said:

“On large infrastructure projects it often takes many, many years to take the project from concept to completion. In the case of Geneva Airport’s Aile Est it will take at least ten years. Much of this time is spent by the architect trying to lead a vast range of consultants, the client body, experts, contractors, suppliers towards a common goal. It is not always glamorous work.

"The RA exhibition takes a refreshing and relatively rare interest in the process that leads to the executed work; the construction drawings. Gate 1 of 7 expresses the interest of RSHP – and Graham Stirk in particular – in the coordination and expression of structure and services which will ostensibly be exposed in the finished building. The static superstructure with its network of services contrasts with the dynamic arms of the telescopic air-bridges whose position varies depending on the size and model of the aircraft arriving at the stand.”

When completed, the Aile Est (east wing) project will represent an important improvement for Geneva Airport in terms of the flexibility of its operation and passenger comfort. It will facilitate an increase in medium-haul and long-haul flights, and strengthen Ganeva's position as a major European airport.

It will replace an existing temporary building with a "processor" with passport control booths for immigration and emigration, and Schengen and non-Schengen arrival and departure gates with airline lounges at mezzanine level.

The project is a collaboration between consultants based in four countries, which means good communication, including good technical and visual communication, is especially important. The building will be energy positive when built, with innovative sustainability features including:

Retrieved from "https://www.designingbuildings.co.uk/wiki/Royal_Academy_architecture_prize_2017"
Create an article