On 28 July 2017, following the Grenfell Tower fire, Communities Secretary Sajid Javid announced an independent review of the building regulations and fire safety. The review was led by Dame Judith Hackitt, and focussed specifically on issues related to high-rise residential buildings, including:

On 18 December 2017, an Interim Report, was published, which called for a 'universal shift in culture'.

On 16 May 2018, Building a Safer Future, Independent Review of Building Regulations and Fire Safety: Final Report, was published, setting out more than 50 recommendations for government as to how to deliver a more robust regulatory system. 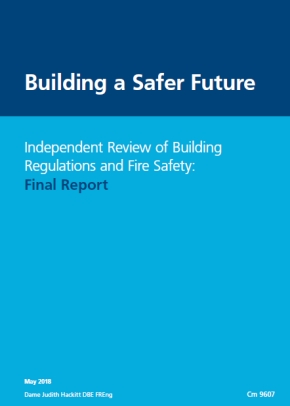 In the report Dame Hackitt suggests that; “…there is a need for a radical rethink of the whole system and how it works. This is most definitely not just a question of the specification of cladding systems, but of an industry that has not reflected and learned for itself, nor looked to other sectors.”

The recommendations are intended to apply to new and existing high-rise residential properties which are 10 storeys high or more. In some cases however, the review suggests applying specific recommendations to a wider set of buildings, and it is proposed that the scope could be extended in light of either critical information emerging or experience of operating the new regime.

The report suggests that:

It calls for a new framework designed to:

The recommendations of the report include:

In relation to the regulations themselves, Dame Hackitt suggests that; “…some of those who construct buildings treat the minimum standards in the Approved Documents as a high bar to be negotiated down, rather than genuinely owning the principles of a safe building and meeting the outcomes set out in the regulations “

The report proposes that the future structure of guidance should support an outcomes-based approach and that the responsibility for developing guidance should be moved to the industry. It also highlights the complexity of supporting guidance beneath the Approved Documents, which reference a wide range of other documents and standards, increasing confusion and making it difficult to determine how to meet requirements. Instead, it suggests that there should be a single, coherent suite of guidance documents with multiple points of entry for different users, and the ability to read across functional requirements.

The report recommends significantly reducing the use of desktop studies rather than physical testing of materials or systems, but stops short of banning them, stating; 'The proposed change does not ban assessments in lieu of tests, as there are some products and systems for which a full-scale physical test is not possible, but it will significantly reduce their use and ensure that those which are carried out are conducted rigorously and properly recorded for further scrutiny.'

Lord Porter, chairman of the Local Government Association, said: "...our immediate priority is to ensure that a fire like that at Grenfell never happens again, and to make certain the buildings which people live, visit and work in are safe today. It is therefore disappointing that Dame Judith has stopped short of recommending a ban on combustible materials and the use of desktop studies, both essential measures to improve safety."

In response, Dame Judith said; "The guidance already says that you can only use materials of limited combustibility or materials that have been fully tested... It is clear from Grenfell and from the other tests that have been done that despite the guidance currently saying that, people were putting other materials up, so I don't think a ban will work."

RIBA President Ben Derbyshire said; "Whilst there are elements of Dame Judith Hackitt’s Review that we very much welcome, we are extremely concerned that it has failed to act on the urgent need to immediately protect life safety through a more detailed programme of simplified and improved regulations, standards and guidance."

However, Brian Waters, President ACA (Association of Consultant Architects) said; "Dame Judith Hackitt’s report has been greeted with a simplistic outcry criticising her failure to demand a blanket ban on inflammable cladding on high rise buildings. The responsible minister has bowed to public and media pressure to look into this proposition... This would be just a cop-out and it is disappointing that the RIBA has gone along with it."

Nick Baveystock, Institution of Civil Engineers (ICE) Director General said; “The Hackitt Review’s recommendations in many respects align with those put forward by ICE in its interim In Plain Sight report, which focused on the safety of infrastructure assets. It is important the construction industry continues to strive to ensure the highest levels of competence, working coherently to improve the governance of the development, management and operation of assets." (Ref. https://www.ice.org.uk/news-and-insight/latest-ice-news/hackitt-review-response)

BRE's acting CEO Niall Trafford said; "We endorse the urgent need to create a simpler and more effective mechanism for driving building safety... In particular, we are very supportive of a new regulatory framework focused, in the first instance, on higher risk residential buildings 10 storeys or more in height and a new Joint Competent Authority (JCA) to oversee this. We welcome the call for a more streamlined, regulatory route to oversee building standards and more rigorous powers to enforce these”.

Julia Evans, BSRIA Chief Executive, said; “How building regulations are implemented is BSRIA’s key area of concern. A robust method of ensuring buildings are built to the intended standard is something BSRIA is calling for. In fact – the web of regulations – the standards themselves, the framework and implementation – needs unpicking. Independent verification of the performance of components and buildings is necessary."

In August 2018, the Construction Industry Council (CIC) published their response to the report. See CIC response to Hackitt report.

Responding for the government, Secretary of State for Housing James Brokenshire MP said; "Dame Judith is clear that the current system - developed over many years and successive governments – is not fit for purpose. She is calling for major reform and a change of culture, with the onus more clearly on everyone involved to manage the risks they create at every stage and government doing more to set and enforce high standards. This government agrees with that assessment and supports the principles behind the report’s recommendations for a new system."

He went on to confirm that the government:

Responding to an urgent question by Labour MP John Healy on 21 May 2018, Brokenshire said; "Having listened carefully to the arguments for banning combustible materials in cladding systems on high-rise residential buildings, the government are minded to agree and will consult accordingly."

In June 2018, Housing Secretary James Brokenshire launched a consultation on banning the use of combustible materials in the external walls of high-rise residential buildings.

[edit] Steering Group on Competencies for Building a Safer Future

In June 2018, an independent steering group was set up to progress the key recommendations of the Hackitt review which identified a lack of skills, knowledge and experience at every stage of the lifecycle of higher-risk residential buildings.

The 'Steering Group on Competencies for Building a Safer Future' will be a sub-group of the Industry Response Group (IRG) established in July 2017 to coordinate action and advice to building owners, and will continue the capacity and competence work started by the IRG. The group will be chaired by Construction Industry Council (CIC) chief executive Graham Watts, who also chairs the IRG. Peter Caplehorn (Construction Products Association) and Peter Yates (Local Government Association) will be Deputy Chairs.

The Hackitt review suggests that a year should be required for completing this work, with updates every quarter.

On 5 October 2020, the Competence Steering Group released its final report, Setting the Bar, which includes recommendations designed to produce a new competence regime for construction safety.

In December 2018, James Brokenshire launched Building a safer future: an implementation plan, setting out how the recommendations of the Hackitt Review would be implemented in full.

The decision to allow good fire resistant materials is the right one. To insist on non combustible is an extreme position to take. Keep in mind that non combustible means zero combustible products, so for example a plastic wall plug would fail the test.