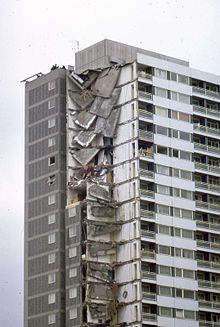 Ronan Point was a 22-storey tower block in Newham, East London which suffered a partial collapse on 16 May 1968, only two months after opening.

A gas explosion resulted in the progressive collapse of an entire corner of the tower block, which killed 4 people and injured 17 other residents. The cause of the explosion was a resident striking a match to boil water which ignited the gas that was leaking from a joint in a newly-installed cooker.

The explosion blew out the load-bearing flank walls, which had been supporting the four flats directly above, lifting the ceiling and floor slab. This resulted in a house-of-cards progressive collapse as the floors above were then unsupported.

Despite the relatively low casualty rate, the impact of Ronan Point was dramatic. As the blame being placed on poor design and construction, public confidence in tower blocks fell dramatically, and this spelt the end of the high-rise and prefabrication as solutions to the post-war housing crisis.

The architectural profession was also badly tarnished by the event, and modernism in general, being synonymous with high-rises, suffered similar criticism. In the 20 years following the disaster, a large number of similar tower blocks were demolished and major changes were made to the building regulations.

At more than 200 ft tall, and containing 110 flats, Ronan Point was built by Taylor Woodrow Anglian using a construction technique known as Large Panel System building (LPS). This involved the off-site prefabrication of large concrete sections that were than lifted into position by crane and bolting together.

These sort of system-built blocks had been constructed en masse in the post-war push for increased housing provision. The previous year (1967), had seen the largest ever number of new flats and houses built – 470,000.

The sheer scale of this production could be partly attributed to the Housing Act 1956, which introduced subsidies to local councils for every floor that was built over five storeys. 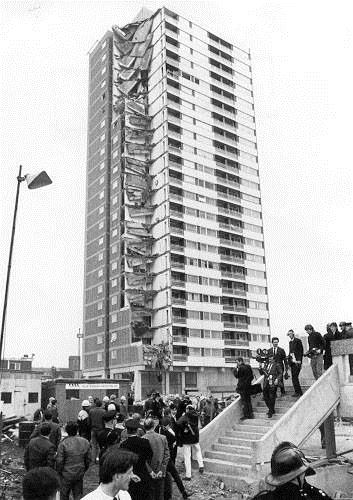 The inquiry into the disaster found that although the design had complied with the building regulations, there were several major concerns about the safety and stability of the tower which was not adequate for even small explosions or for expected wind loadings; nor would it be adequate in a fire, which could have lead to the structure bowing and subsequent collapse.

After the inquiry, the tower was partly rebuilt using strengthened joints which were designed to deal with these issues.

In the years following the inquiry, several people campaigned on the basis that it had unsatisfactorily investigated every issue.

Subsequent investigations, which led to the building’s eventual demolition, found that the revised wind loading assumptions were inadequate because they were based on the assumption that all the windows were closed. If, under heavy wind loading, a window was broken or was left open, pressure on one side of a wall panel and suction on the other could have led to a similar failure.

Other construction defects were found, such as the fact that, instead of being spread evenly along the panel, the whole weight of each wall panel was being supported by the panel beneath by two steel rods, resulting in very high stresses. Also, strengthening brackets fitted during the rebuilding were often incorrectly attached, having been fastened to the thin concrete surrounding the hollow-core slabs.

Most concerning of all was the fact that joints within the structure were found to be filled with newspapers rather than concrete.

Cracking in the load-bearing concrete walls was deemed to make the building unsafe for habitation, and the council decided to demolished it in 1986. The Great Storm of 1987 saw hurricane-force winds that might have caused the building to collapse.

In the wake of the Ronan Point collapse, changes were made to the building regulations. ‘Disproportionate collapse’ is now covered in Part A, and requires that ‘the building shall be constructed so that in the event of an accident, the building will not suffer collapse to an extent disproportionate to the cause.’

Measures were also introduced to safeguard buildings in the event of an explosion. These stipulated that all new buildings constructed after November 1968 and taller than 5 storeys, must be capable of resisting an explosive force of 34 kPa (4.9 psi). Existing buildings could be resistant to the lower force of 17 kPa (2.5 psi) if the gas supply was removed and flats were retrofitted with electric cooking and heating.

Retrieved from "https://www.designingbuildings.co.uk/wiki/Ronan_Point"
Create an article