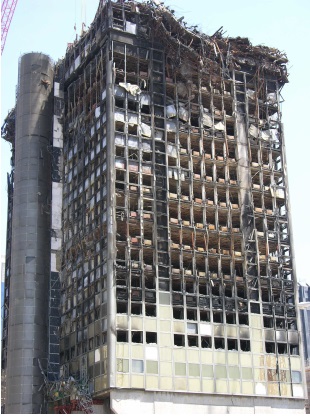 At the time of the design the relevant codes did not require these mullions to have any fire protection. The floor was of concrete waffle slab construction. There were ‘strong’ transfer floors at the 3rd and 17th levels.

A refurbishment programme was commenced in 2005, instigated partly to bring the building up to current fire standards through the installation of active fire prevention and resistance measures. These included protection to the external mullions, new fire doors, and the provision of a sprinkler system. A new external steel escape staircase was also included. At the time of the incident the fire protection to the mullions had been applied below the 17th strong floor (apart from floor 9) but not to those mullions above the 17th floor; the new sprinkler system was not operational.

During this refurbishment work a fire broke out on the 21st floor. The fire spread downwards to the 2nd floor, and upwards to the top of the building. It burnt for some 19 hours and engulfed the entire building. Although local progressive collapses occurred a total collapse was narrowly averted. The new staircase performed well. However, the building was later completely demolished.

The studies concluded that the fire spread as a consequence of the lack of operational fire doors, fire stopping and through radiant heat. Cladding failure worsened the situation by allowing the fire to spread between floors Several floors burnt simultaneously giving rise to very high temperatures as the size of conflagration resulted in a lack of cooling from external air sources.

In the absence of any protection the mullions weakened in the heat. A sufficient number lost their required load capacity causing sections of the building above the upper strong floor at level 17 to collapse. It is likely that only the presence of this floor prevented total progressive collapse. At lower levels none of the fire protected mullions failed.

The mullions distorted at the 9th level (yet to receive their protection), but there was sufficient load sharing amongst the remainder-above and below this level- to prevent collapse of the floors.

Notwithstanding the failure of the mullions, the reinforced concrete structure also suffered serious damage as a consequence of the temperature attained.

[edit] Conclusions from the investigation

An extensive investigation was carried out by INEMAC. Their key conclusions included:

The need to ensure recognition is given to the different cooling rates between steel and concrete where fire proofing is installed on composite sections.

The need for scrupulous upkeep of the systems that limit propagation of fire between fire compartments.

The need for a suitable and sufficient risk assessment from all foreseeable hazards during a refurbishment project. This is particularly important where the building may be occupied, and for intermediate stages which can pose unacceptably high risks unless managed properly (examples of fires occurring in the UK during construction/refurbishment would include the Broadgate office fire (1990), the Uppark House National Trust Property fire (1989) and the Beaufort Park development in Colindale (2006)).

Although the contractor is responsible for adequate on-site fire precautions during construction/refurbishment, on complex projects the designer has a key role to play at the design stage in the consideration of, for example, buildability issues, necessary contractual constraints, formalised methods of working.

This event demonstrates the benefits of ‘strongfloors’ and of alternative load paths, i.e. robustness.

This topic paper was originally published by SCOSS here.

Retrieved from "https://www.designingbuildings.co.uk/wiki/Torre_Windsor_office_building_fire"
Create an article