On 18 December 2018, Secretary of State for Communities James Brokenshire announced the creation of a stronger and more effective regulatory framework to improve building safety, implementing the recommendations made by Dame Judith Hackitt following the Grenfell Tower fire. This will mean tougher sanctions for those who disregard residents’ safety, more rigorous standards and guidance for those undertaking building work, and a stronger voice for residents. 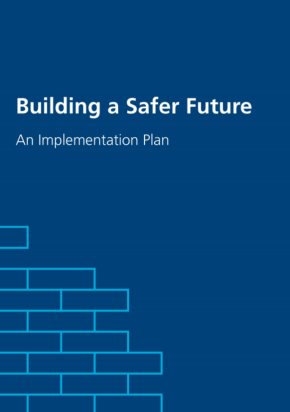 Building a safer future: an implementation plan, commits the government to a programme of reform which will:

The government will establish a Joint Regulators’ Group to trial elements of a new regulatory system, bringing existing regulatory bodies together to work with developers and building owners, residents and tenants. This will include; Local Authority Building Control, The National Fire Chiefs Council, the Health & Safety Executive, the Local Government Association which includes the fire and rescue authorities, and others as required.

A full review of fire safety guidance within the building regulations has also been launched. The government has issued a call for evidence and is also inviting views from residents and those who manage buildings about how to improve fire and structural safety.

James Brokenshire MP said; “My plan for stronger, tougher rules will make sure there is no hiding place for those who flout building safety rules. By making people responsible and more accountable for safety, we will create a more rigorous system so residents will always have peace of mind that they are safe in their own homes.”

LABC Chief Executive, Paul Everall said; “The Secretary of State has shown leadership by recognising the need for systemic reform of the building safety regime by implementing Dame Judith Hackitt recommendations in full. LABC has pledged to provide full support to the new Joint Regulators Group and we are ready with resources, people and expertise”.

Chris Blythe OBE, Chief Executive of the CIOB, said; “There is a lot in this comprehensive document which supports the work the CIOB and their partner organisations - including RICS and RIBA - have been doing. We will now examine and absorb the detail in the document, pull together all the different aspects of quality in construction that we have been working on, and work with government on the next steps to create and implement the framework they want in place to ensure building safety now and in the future.”

You can see the full plan at: https://www.gov.uk/government/publications/building-a-safer-future-an-implementation-plan

On 6 June 2019 the Ministry of Housing, Communities & Local Government (MHCLG) published Building a safer future: proposals for reform of the building safety regulatory system, seeking views on a new building and fire safety system following the recommendations of the Hackitt Review.

Retrieved from "https://www.designingbuildings.co.uk/wiki/Building_a_safer_future:_an_implementation_plan"
Create an article