On 26 June 2017, in a statement to the House of Commons, Sajid Javid, Secretary of State at the Department for Communities and Local Government (DCLG) announced the creation of an independent expert panel to advise the government on the fire. Ref https://www.gov.uk/government/speeches/government-response-to-the-grenfell-tower-tragedy

Core members of the panel include:

On 30 June, the panel released a statement saying: 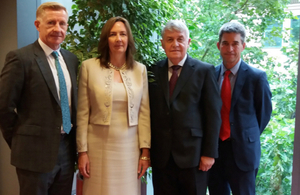 The panel met for the first time on 30 June 2017, when they agreed the most immediate issues they will address.

It was confirmed that the panel will:

On 6 July 2017, the Grenfell Tower independent expert advisory panel advised that further testing should be carried out by BRE to establish how different types of ACM cladding behave in a fire in combination with different types of insulation. This, they suggest will help landlords decide what further measures may be needed to make their buildings safe.

The tests will look at 6 combinations of 3 different types of ACM cladding, with polyethylene, fire retardant polyethylene, and non-combustible mineral cores, combined with insulation of rigid polyisocyanurate foam and non-combustible mineral wool. The tests will be carried out in accordance with BS 8414, and involve building complete cladding systems 9 metres tall and then subjecting them to a severe fire. The results will be made publically available, but landlords should take professional advice on the implications for their buildings.

At the third meeting of the Panel, they suggested drawing attention to the need to ensure recladding work complies with all Building Regulations’ requirements, including; structural safety, resistance to moisture penetration and build up, and energy - as well as ensuring fire safety. As a result, on 13 July 2017, a letter was sent from the Department for Communities and Local Government (DCLG) to all building control bodies in England including approved Inspectors.

On 10 July 2017, the Department for Communities and Local Government (DCLG) and the Department for Business, Energy & Industrial Strategy (BEIS) confirmed that an industry response group (IRG) will be formed to help coordinate the construction industry’s response to implementing recommendations from the IEAP and government. For more information see: Grenfell Tower industry response group.

The first results of the full cladding system tests were revealed on 28 July 2017, when DCMS announced that a system comprising ACM cladding with polyethylene filler (Category 3) and foam insulation, with fire breaks and cavity barriers in place did not satisfy the requirements of the building regulations. 82 buildings are thought to have this combination of materials in their wall construction. Ref https://www.gov.uk/government/news/first-systems-test-reaffirms-actions-for-landlords

In a statement, the Independent Expert Advisory Panel said:

On 2 August 2017, the government announced that the second series of tests had been completed, testing a system consisting of ACM cladding with a polyethylene filler (category 3) with stone wool insulation. The Expert Advisory Panel advised that the combination does not meet current building regulation guidance. There are 111 buildings known to use this system. Ref https://www.gov.uk/government/news/government-fire-safety-testing-programme-continues

On 4 August 2017, The Times reported that in his previous role as chairman of the impartiality committee at Warrington Certification, panel chair Ken Knight had signed off a certificate for Reynobond FR, a more fire-resistant version of the Reynobond PE cladding used on Grenfell Tower. This certified the cladding as Class B, and suitable for use as facade cladding in certain situations, and for wall and ceiling applications. Warrington Certification pointed out that this did not constitute an approval, and that further tests were necessary for the cladding to be used. Ref https://www.thetimes.co.uk/edition/news/grenfell-inquiry-chief-sir-ken-knight-not-aware-he-was-director-of-fire-safety-firm-jswl0t5lk

On 8 August, results of the third series of tests was published, consisting of ACM cladding with a fire retardant polyethylene filler (category 2 in screening tests) with PIR foam insulation. Again, the Panel advised that the combination of materials does not meet current Building Regulations guidance.https://www.gov.uk/government/news/further-results-published-from-governments-fire-testing-programme

On 11 August, the results of the fourth round of tests was published, relating to ACM cladding with a fire resistant polyethylene filler (category 2 in screening tests) and stone wool insulation (a form of mineral wool). The combination of materials passed the test and so can be compliant with the Building Regulations. Following the tests, Advice for building owners: large-scale wall system test 4 was published by the Panel.

On 14 August, the results of the fifth test, assessing ACM cladding with a limited combustibility filler (category 1 in screening tests) with PIR foam insulation were published. The Panel reported that these results show the combination of materials can comply with the building regulations. Ref https://www.gov.uk/government/news/second-wall-cladding-system-passes-latest-government-fire-safety-test

On 21 August 2017, the results of the sixth large scale tests were published, revealing that a system consisting of ACM cladding with a fire retardant polyethylene filler (category 2 in screening tests) with phenolic foam insulation did not satisfy the Building Regulations. Ref https://www.gov.uk/government/news/latest-large-scale-government-fire-safety-test-result-published

On 25 August, the results of the final test were published, a system consisting of ACM cladding with a limited combustibility filler (category 1 in screening tests) with stone wool insulation. The Grenfell Tower independent expert advisory panel reported that this combination of materials can be compliant with the building regulations when installed and maintained properly. Ref https://www.gov.uk/government/news/government-completes-large-scale-fire-safety-testing-programme

On 11 December 2017, the Department for Communities and Local Government in consultation with the Independent expert advisory panel published:

Retrieved from "https://www.designingbuildings.co.uk/wiki/Grenfell_Tower_independent_expert_advisory_panel"
Create an article