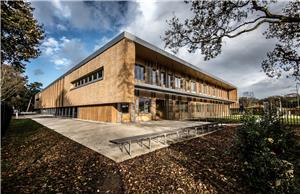 The Enterprise Centre is the latest pioneer building for UEA, following in the footsteps of the Elizabeth Fry Building, the Zuckerman Institute and the Julian Study Centre.

'BREEAM outstanding' was achieved with a 93% rating and Passivhaus certification is being targeted. The building has been built on a brownfield site using 70% bio-based materials, many of which were sourced locally.

It exceeds local planning requirements for 10% of the building’s energy to be from renewables, with a 480 sq. m roof-mounted photovoltaic array, predicted to generate 44 MWh a year. Over the lifetime of the building, the embodied carbon is predicted to be one quarter that of a conventionally constructed building.

The two-storey 3,400 sq. m building is the new home for the Adapt Low Carbon Group, which was created to commercialise graduate start-up firms that have grown out of UEA’s world-class environmental sciences departments. Adapt wanted its new facilities to be an exemplar of sustainability.

The building is wrapped in thatch: this traditional Norfolk roofing material is formed of 250 mm thick layers of straw set in prefabricated, vertically-hanging timber cassettes – a world first according to Morgan Sindall’s senior site manager Ken Bassett. The thatch holds, for 100 years or so, carbon absorbed by plants photosynthesising, providing a good carbon negative local material.

The unique cassette system was developed under a single point delivery contract by Morgan Sindall and project architect Architype. The cassettes were thatched horizontally by local thatchers, who were able to carry out the work safely in barns through the winter when traditionally there is very little work for them. The use of cassettes has enabled this traditional material to be installed in much the same way as conventional cladding panels.

Significantly, the panels sit outside the building’s airtightness and insulation line and are not part of the structure. Thatch cladding features on every elevation of the E-shaped building. The building’s form was driven by the requirement to maximise the amount of daylight internally, providing light airy spaces.

The top and bottom elements of the E are formed by the two main wings, one of which is for teaching, and the other for start-ups, while a predominantly transparent block links the wings in its centre, and forming the middle of the E is a 300-seat auditorium.

In keeping with the low carbon philosophy, a 70% ground granulated blasted furnace mix was used as a cement replacement for foundation and structure, which reduced embodied carbon to 30% compared to a regular building. A 98% recycled steel frame was also used, instead of the typical 50%.

Heat losses were minimised by polystyrene kerb units which enabled the insulating envelope to continue from under the concrete raft to join up with the insulation in the wall. The building’s glulam structural frame is supported by the raft. It was sourced from abroad because there are no commercial-scale glulam makers in the UK.

The project makes use of Corsican Pine, sourced from Thetford Forest 30 miles away for the construction of internal studwork walls. Timber is also used for construction of the façade brise soleil which can be adapted to allow more louvres to be added in the future.

The need to rethink the allocation of south-facing windows was deemed essential for Passivhaus, as a source of passive heating and to help limit internal gains. Aided by LED lighting and an intelligent control system, this helped keep lighting loads to a minimum and kept the primary energy demand below 120 kWh/m2/yr.

BSRIA conducted a thermographic survey for the building at dawn on 13th May 2015. The survey found overall thermal insulation of the building to be to a very high standard, but also identified a few areas that needed attention before handover. It can be seen from the thermal images (in figure 1) that air leakage is evident on one façade of the building at the top of the wall between the straw cassette panels, and frames of doors and windows seals were in need of improvement. 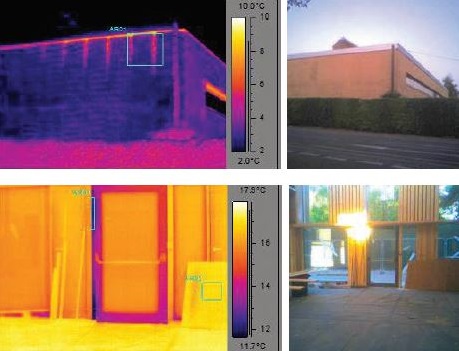 The building is exceptionally airtight, even by Passivhaus standards – achieving an airtightness of 0.21 air changes per hour at 50 Pa, which is equivalent to an air permeability of 0.35 m3/(h.m2) @ 50 Pa. This is one of the lowest air permeabilities that BSRIA has tested for a non-domestic building.

Unusually for a Passivhaus project, the Enterprise Centre does include a small amount of cooling in the 300 seat auditorium to ensure it remains comfortable in the summer. This is provided by a small direct expansion system with a cooling coil positioned in the supply air stream and a heat rejection unit situated in the exhaust air stream.

In the main floor areas, there is no cooling but occupants can open windows to provide ventilation once outside air temperatures are high. The ventilation strategy and other features of the building were agreed with UEA’s Estates team, who were involved with the project under its Soft Landings initiative, led by Stuart Thompson, Senior Design Manager at Morgan Sindall. Engagement of the Estates team at design stage was pivotal, to encourage efficient operation of this highly innovative building.

By working with the client team and building users, the project team was able to ensure that the building met expectations after handover. In addition, they planned the handover process way ahead of completion, ensuring that staff were trained and supported in how to operate the building and its systems. Particular effort was put into the controls interfaces for ventilation devices, for example, indicator lights are provided advising occupants when to open and close windows (see figure 2). 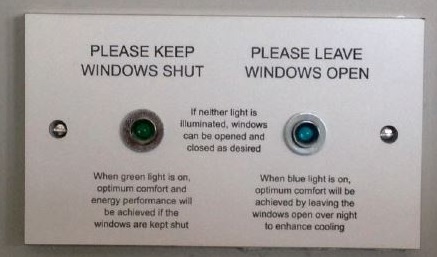 The project team played a vital role with ensuring building readiness. By making extra effort to understand the needs of the end-users, they enabled the building’s operation to be optimised. Morgan Sindall’s Aftercare and Perfect Delivery models complement the process further, demonstrating their ability to exceed expectations.

“There was a Soft Landings approach to handover, together with a commitment for three years’ post-occupancy evaluation. We were thrilled to receive this scope, as in a similar approach to our Perfect Delivery philosophy, Soft Landings aims to be a golden thread running alongside the procurement process, improving design targets, managing expectations, making handover special and providing a vehicle for feedback and asset evaluation.

"An ‘Operational Risk Register’ was started alongside a sensitivity analysis to room occupancy levels. This formed the basis of a log to help inform our aftercare team of all issues that emerged and decisions made.”

One challenge of gaining Passivhaus certification is that small power loads are included in the Primary Energy Demand maximum. In the planning stage, the design team spent a lot of time selecting the building’s AV systems and, to keep small power loads to a minimum, the client was keen not to flood the building with electrical sockets.

A key aspect of delivering the exemplary low carbon building was ensuring that the project has the lowest life cycle cost possible. The life cycle cost of a project is often discussed in construction but not usually followed through. Key to the success of this project was a client team who were happy to dedicate time and resources to evaluating this aspect of the development in such detail.

BSRIA’s expertise in life cycle costing played its part here. Life cycle costing focuses on economic assessment using profiles of current and future costs and benefits to arrive at a discounted net present value of the life cycle costs. There is increasing emphasis being placed on life cycle costing studies as part of the decision-making process for asset management, new-build, refurbishment and plant replacement projects so that all the costs can be taken into account rather than just those for capital investment. Life cycle costing is one of the strategic priorities of the Government Construction Strategy 2025.

To reach the final specification, there were several design iterations balancing cost, carbon, lifecycle and maintenance. The design decisions that were made based on life cycle cost analysis have also been shown to have significantly reduced the levels of material and equipment replacement and intermediate maintenance activities.

Careful attention was paid to the controls interfaces to make them legible to non-technical occupants. These informative devices tell users what to do and when to do it, while also communicating the system’s current status. Such attention to detail is typical of the Enterprise Centre. It doesn’t add much capital cost, but can make a huge difference to occupant behaviour.

The Enterprise Centre may represent a new standard in sustainable architecture to be set that hasn’t cost the earth. BSRIA will be performing the post-occupancy evaluation in spring 2017 and will report on the building’s long term performance.

Retrieved from "https://www.designingbuildings.co.uk/wiki/University_of_East_Anglia_-_case_study"
Create an article