The Scunthorpe Sports Academy project, or "The Pods" as a local competition named it, provides North Lincolnshire Council with a new, integrated sport facility designed to replace a number of existing ageing facilities. The project was run as a RIBA architectural competition supported by the local regeneration body Yorkshire Forward with the objective of obtaining an outstanding landmark building that would act as a spur to further regeneration of Scunthorpe and the local area.

The winning design envisioned the building as a series of intersecting domes each of which contained a different function (main swimming pool, learner pool, sports hall (with six badminton courts), gym/dance hall and reception/entrance/café). These domes are clad in a mixture of materials from cedar to sedum in order to blend the building into its surroundings on the edge of an existing park which contains ancient woodland.

The structural principle of the building was established early on and consists of a series of simple, free-spanning domes between 20m and 60m in span. These utilise shell action to cover each of the spaces in a very materially efficient manner.

Around the perimeter these domes touch the ground but in the centre of the building they are raised up to give room for a mezzanine structure. The seams where the domes intersect typically need some form of laterally stiff structure to resist the resulting dome thrusts. However would have resulted in either a lot of intrusive bracing in the space below or a large horizontal truss adding complexity and significant additional cost. Therefore the lateral forces are instead balanced between the domes with any resulting imbalance taken out by the in plane stiffness of the domes themselves back to the perimeter foundations.

A simple, single, steel beam can then be used to act as an interface between two domes, this is supported vertically at discrete locations on steel columns that carry the vertical component of the thrust and the weight of the domes to internal pad foundations.

The project was envisaged as an exemplar of sustainable design and therefore timber was the natural choice for the primary structure of the building, with steel used only where necessary to transfer concentrated loads at dome intersections. As well as sustainable and aesthetic benefits, timber is also particularly well suited to the high humidity environment of swimming pools. Its high strength to weight ratio helps to minimise the weight of the roof structure.

A doubly curved form was used to provide strength and stability in an efficient manner, and a gridshell structure was proposed to avoid complex curved beams with non-repeating geometries. A nodal, glulam-gridshell structure was selected as the most economic and appropriate for this project. This used straight lengths of timber (ranging from 300mm to 650mm deep and up to 8m long). A triangular pattern with a steel interface nodes was used to allow each panel to sit in a different plane relative to the adjacent panel to create a faceted surface. Whilst this approach has been used before in Europe and occasionally in the UK it is by far the largest and most complex form building of this type and so has pushed the boundaries of the technique to new levels.

A significant part of the project involved developing the final form to maximise space utilisation, as most uses of the building require a rectangular volume (ie pools and courts) within the curved domes. In addition there were architectural constraints to maintain the original vision and structural requirements to ensure the structure worked efficiently.

Bespoke form-finding algorithms were developed by the engineer Buro Happold to generate the final overall surface geometry. These also integrated the development of suitable grids for the structural layout including structural requirements for member lengths, angles of intersection at nodes, and architectural requirements for the appearance of the grid. Various approaches were tried based on a pentagonal and hexagonal grid and the algorithms were evolved using dynamic relaxation techniques. The result is a bespoke grid to each surface that has an even and smooth layout of members whilst also enabling standardised components for the member sizes and connections.

Use of codified wind loading would have led to very conservative design loads and resulting over-designed and expensive structure. The interaction of the domes and pattern of the wind loads was not clear. This could be resolved with a wind tunnel test but the cost of this is high for a project of this size. So an innovative approach was adopted using volumetric CFD (computational fluid dynamics) analysis of the structure as a virtual wind tunnel. This identified the pattern of wind loading in the more complex downstream domes and valleys. The load pattern was then calibrated to ensure the peak loads for the upstream faces complied with codified approach. This approach was only a third of the cost of the wind tunnel approach and ensured an efficient structure within the client’s budget. 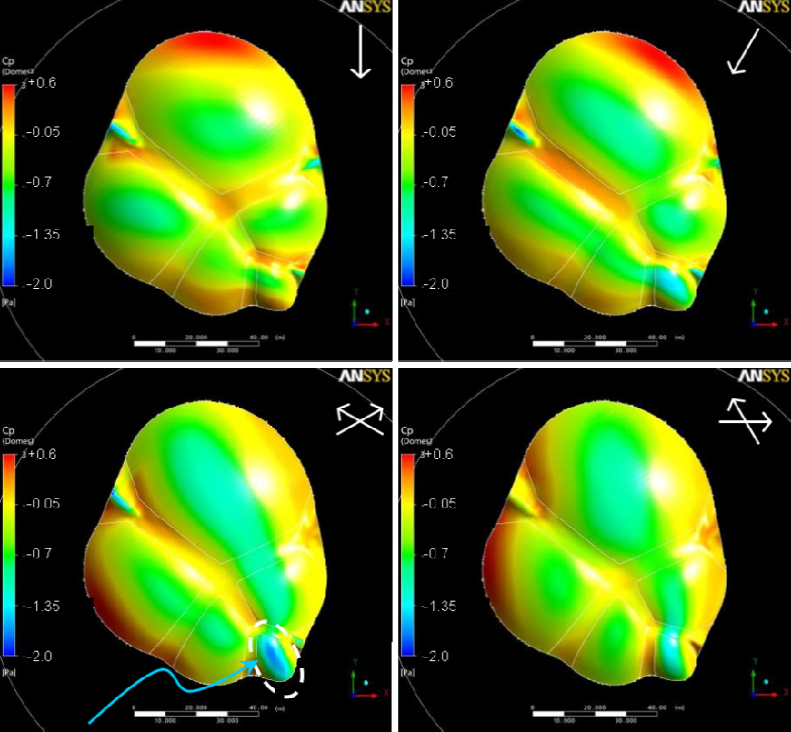 The perimeter foundations are a critical part of the structural behaviour of the roof as they provide the lateral thrust resistance and vertical support required for the shell action. Various options were considered but the final solution used a series of mini piled foundations with two raking piles per support to transfer the significant lateral thrusts to the interbedded limestone and mudstone strata.

In addition to the main roof structure the other key structural components of the building are a steel framed mezzanine structure with composite metal deck, an independent cafe mezzanine with a floor slab of exposed cross laminated timber slabs which cantilever out from a central steel frame to form an elliptical platform in the main entrance, a reinforced concrete pool structure and a ground bearing slab supported on a 1.2m depth of lime stabilised soil.

The connections between the glue laminated timber members are critical to the overall performance of the roof. Whilst compression governs the design, there are still significant amounts of bending under asymmetric loading. The node connections use glued rods in the end of the glulam beams to resist tension and shear with a bearing plate welded to the node to transfer axial compression forces. This results in a suitably rotationally stiff detail. The rods in the timber have a threaded socket at the end so they can be bolted through the bearing plate into the socket.

Glued in rods have been used on other timber projects in the past but the methods used to install them, the size of the holes, the glue used and so on can have a significant effect on their behaviour. The importance of this joint and the variety of moisture conditions in the finished building was a concern. So pull-out and full-scale joint testing was undertaken by Bath University to verify the design and obtain joint capacities to allow finalisation of the connection design.

The form of the roof structure is such that all components are unique and therefore the use of 3D CAD/CAM techniques were critical to the success of the fabrication and erection stages. A full 3D fabrication model was constructed by B&K Structures from which all elements were fabricated. This was also used to plan the erection sequence which allowed the structure to be built with relatively few towers (typically only between 3 and 6 towers per dome) rather than the traditional full-scaffold platform used on similar structures.

After erection of the primary roof structure, secondary glue laminated beams were installed to subdivide the main triangular panels into 4 smaller triangles, which were infilled with prefabricated timber roof cassettes. These were developed by a specialist supplier as a complete assembly with the final timber ceiling, softwood joists, plywood sheathing, insulation and vapour barrier all pre-fitted allowing very rapid erection and covering of the main timber structure.

This project demonstrates how the ingenuity of structural engineering is fundamental to realising projects within budget and without compromising the original vision. This was only possible with the intelligent and appropriate use of advanced analysis, CFD wind modelling, evolutionary algorithms, and modelling of the erection sequence to deliver a deceptively simple and buildable structure. It is that excellence of engineering thought, design and detailing that has delivered a truly inspirational building.

Retrieved from "https://www.designingbuildings.co.uk/wiki/Scunthorpe_Sports_Academy"
Create an article