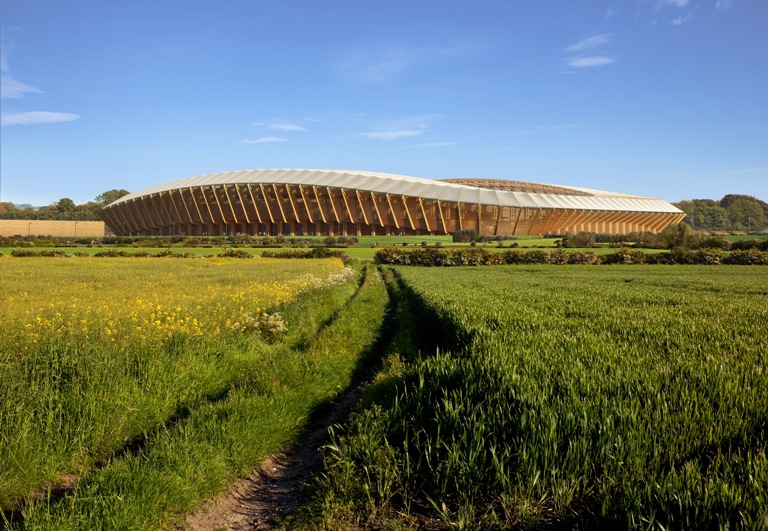 The carbon neutral stadium will be the centrepiece of a £100m Eco Park in Gloucester. It will be made largely using timber and so will have very low embodied carbon. It is thought this is the first timber football stadium anywhere in the world.

Dale Vince, Ecotricity founder and Forest Green Rovers chairman suggested that three quarters of the lifetime carbon impact of stadiums comes from their building materials, and that the ZHA scheme will have the lowest embodied carbon of any stadium in the world.

Ecotricity’s 100 acre site will also include state-of-the-art sporting facilities, a sports science hub, a green technology business park and a nature reserve. It will aim to be carbon neutral or carbon negative, and will include on-site renewable energy generation.

Dale Vince said, “We’re thrilled with the concept and the amount of thought Zaha Hadid Architects put into their design – their experience of stadia design and their ability to put environmental issues at the heart of what they do really stood out… we’ll be going further than anyone has done before – this really will be the greenest football stadium in the world.”

Jim Heverin, Director at ZHA, said: “Embodying low carbon construction methods and operational processes, it will be the first all timber football stadium with almost every element made of sustainably sourced timber including its structure, roof cantilevers and louvered cladding. As a building material, timber is highly durable, recyclable and beautiful. The proximity of the stadium’s structural elements to each other has also been determined to enable the seating terraces and floor slab to be made from timber. In most other stadiums, these elements are concrete or steel.” 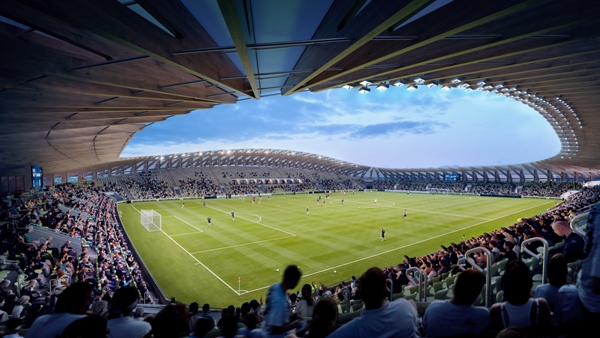 However, plans for the green technology business park were later dropped, and in June 2019, Stroud District Council voted against granting the proposals planning permission.

A revised design was granted planning permission in December 2019.

Retrieved from "https://www.designingbuildings.co.uk/wiki/Forest_Green_Rovers_football_stadium"
Create an article