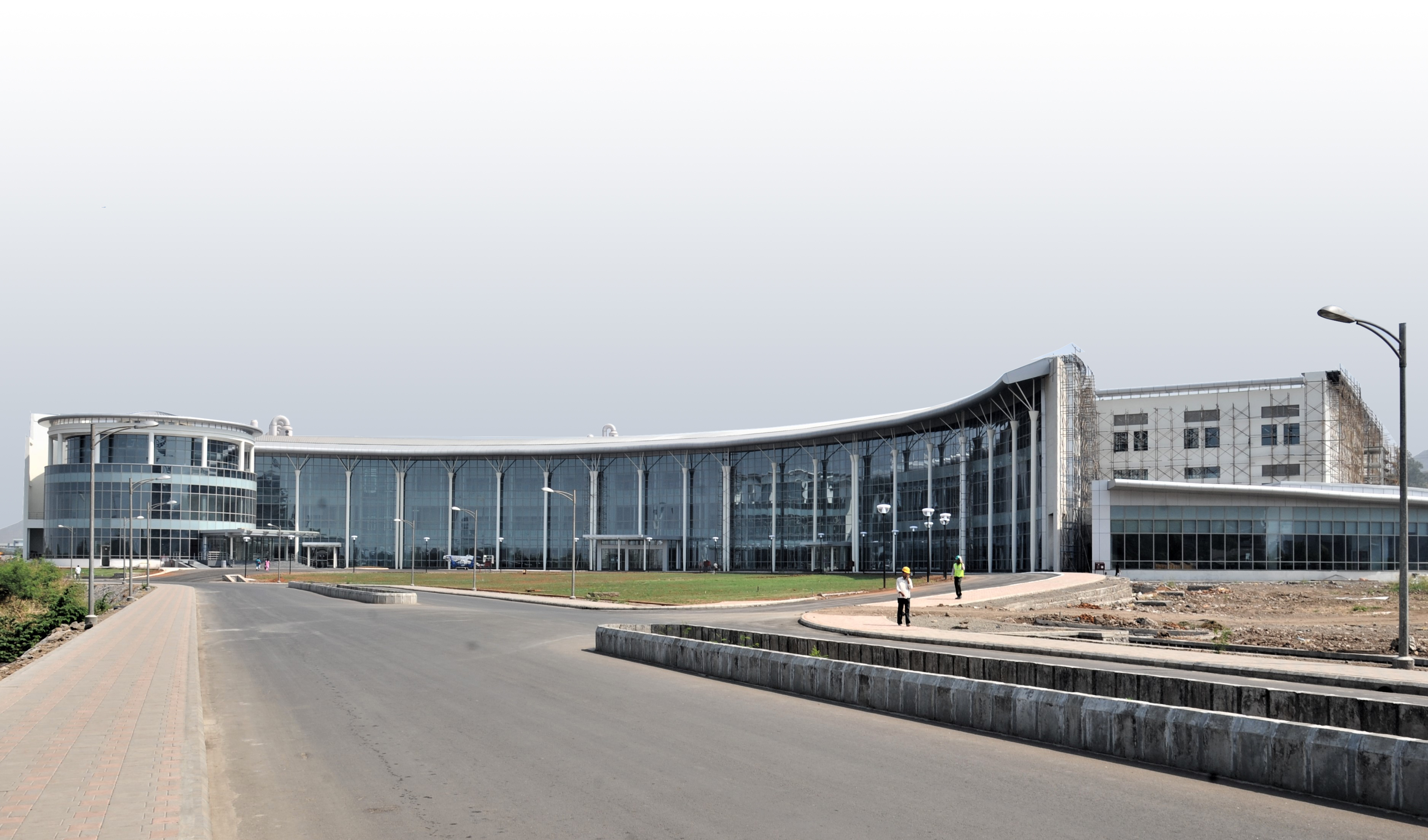 When we speak of “high tech” or “high performance” buildings, the immediate vision is of the Starship Enterprise or some such figment of cinematic imagination. Having had the opportunity of working in India and other developing nations, ANA has had the good fortune of being a part of very committed and innovative teams that have delivered such buildings, in very competitive timelines and costs. Our biggest so far, has been the flagship laboratory complex for Reliance Technology Group or RTG for Reliance Industries Limited at Navi Mumbai, India.

This laboratory complex, spread over half a million square feet, houses the research laboratories for all businesses of Reliance Industries, and the main National Operations Centre for their telecommunication company, Reliance Jio are divided over three floors, each 6 m high to ensure a 4.5 m false ceiling height, despite a heavy contingent of services required in this building. 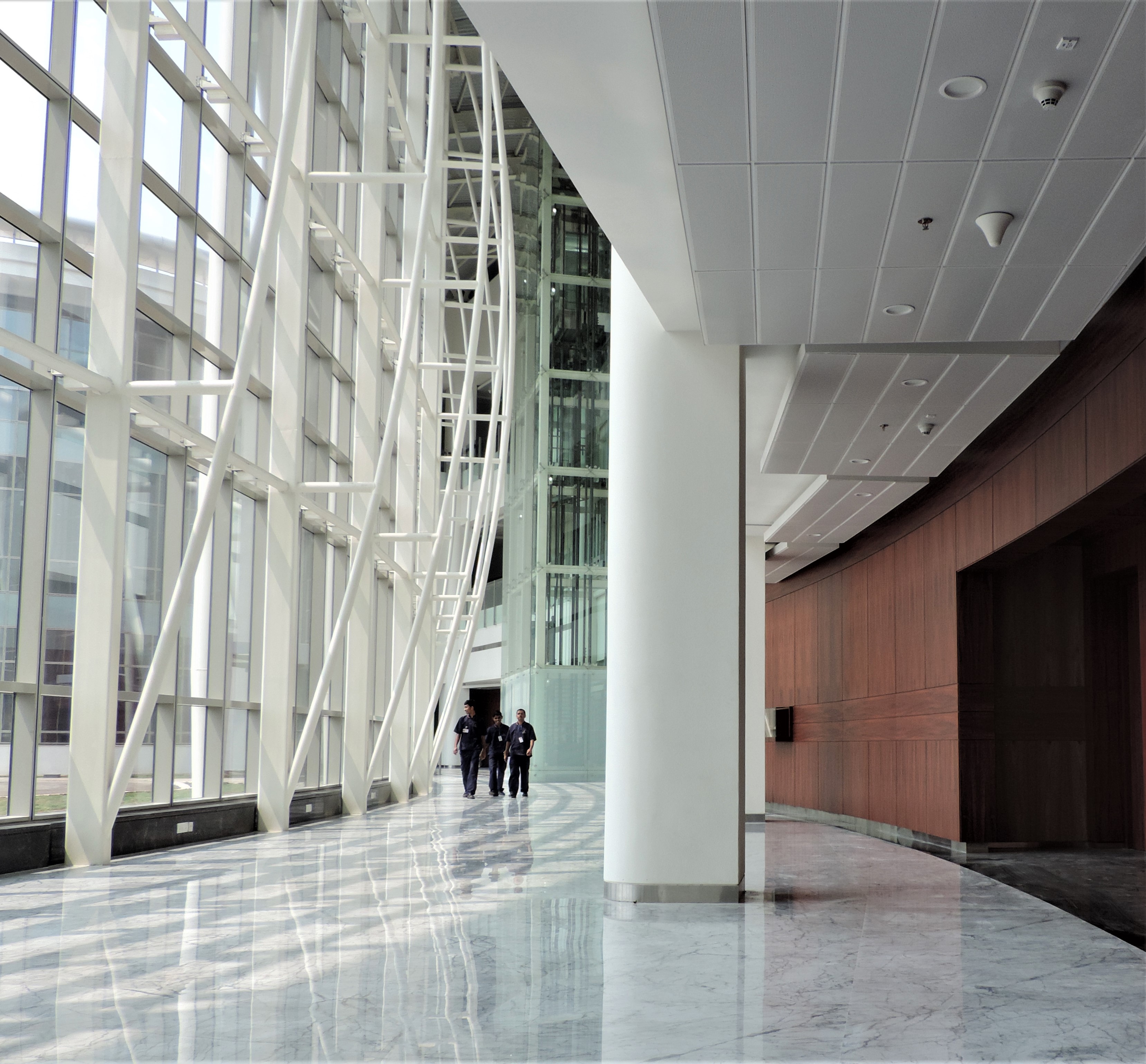 The client wanted a building that would not only be spatially and service-wise be appropriate, but also create a landmark that celebrates the coming of age for India’s research programmes especially in the private sector. Arguably, this is India’s largest industrial and scientific research facility in a single complex. Not only size, but the functions, services, facilities and quality of spaces has been rigorously benchmarked against the best facilities in the world, and, in most cases, the RTG complex matches or exceeds those benchmarks. 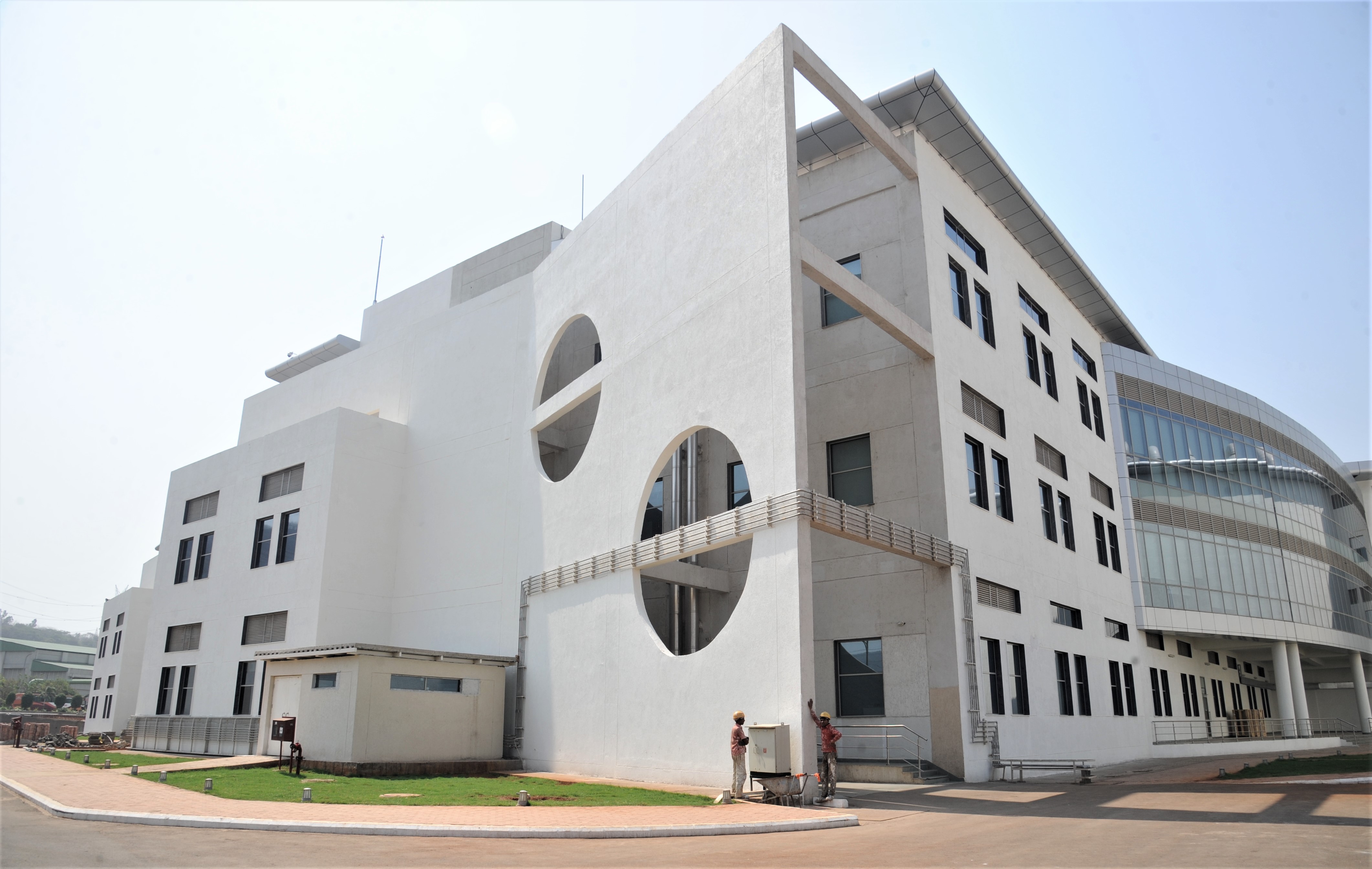 The building was designed to function as a core of research laboratories, arranged in four separate blocks, based on their service needs and co-related disciplines.

The site conditions were such that the main building opened out to the west. Since the site is close to the coast, there was a large amount of glare and heat gain expected from this orientation.

However, it was felt that the facade must represent a philosophy of open communication and exchange of ideas. Hence, a curved glass facade, incorporating a double glazed system of high performance glass, along with a carefully considered curve that imparts a prismatic function to the facade was designed.

This curved glass encloses a narrow atrium just 4.5 m wide that runs along the administrative spine. The glass design allows the facade to reduce glare and direct sunlight into the office spaces, at the same time providing a climate controlled and cheerful atrium for circulation, pre function interaction, cafeteria and informal spaces. 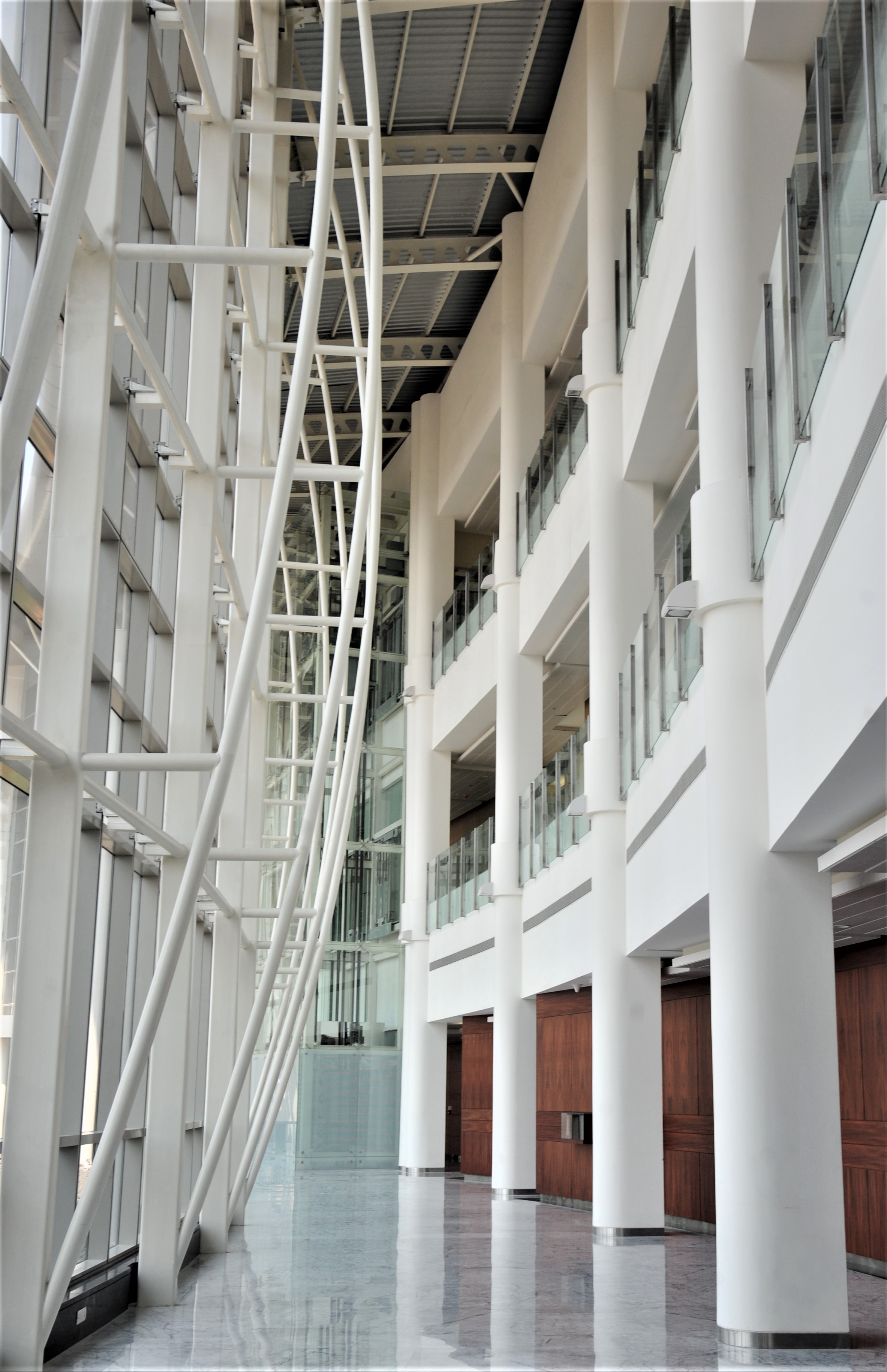 The main pedestrian connection spine was hence, placed on the most visible part of the building. This allows for a very active and well utilised “corridor” space that is also the visually most important part of the building. It is designed to encourage casual interaction and collaboration between the 750 scientists who will work here.

It is no secret that some of the most innovative and cutting edge “ideations” are born in informally interactive environments, and the building lives up to that standard of delivery, thus making it something beyond a cold, functional machine.

The solar glare from is cut off by the atrium facade and using carefully controlled ventilation, the warmth of the solar gain is prevented from being transferred to the labs or offices.

As a result, this intensely service oriented building has an air-conditioning efficiency of approximately 230 square feet per ton, making the average conditions at approximately 80% that of a conventional office building!

This, despite the fact that chemical fume hoods are venting the reactive fumes into scrubbers and the average height of the facility below the false ceiling is 4.5 m from the finished floor!

The high efficiency is a result of carefully designed insulation of the main building, controlled ventilation and bleed of fresh air through fume hoods and chemical chambers, as well as an effective and highly sensitive BMS (Building Management System) that acts as a balancing interface between cooling, ventilation, fresh air, internal air quality and chemical exhaust systems. 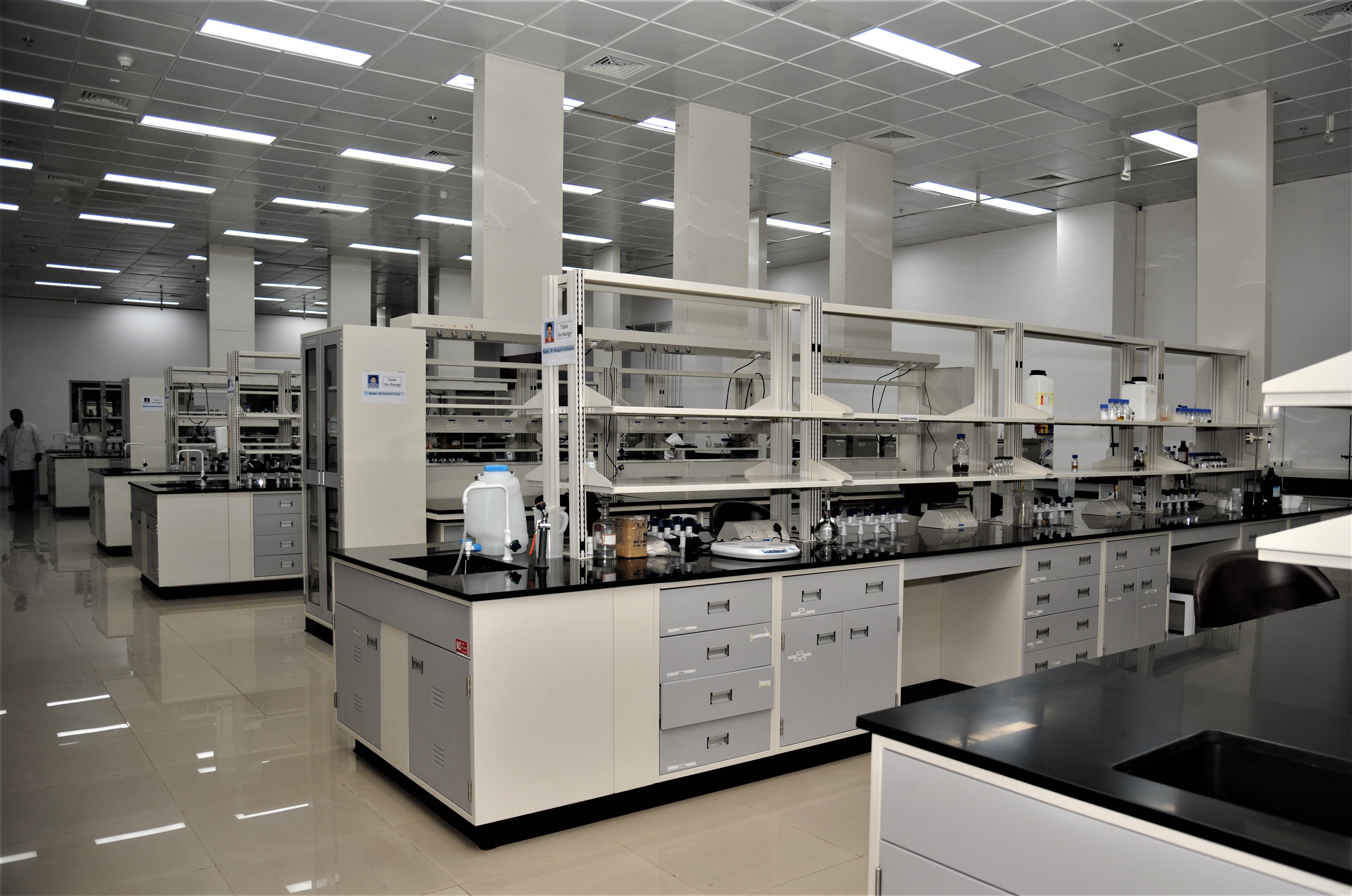 All of the office spaces are positioned to be facing landscaped gardens and green areas, allowing the scientists not just natural light in their work spaces, but also serene views from the large, double glazed windows.

This significant energy optimisation has been achieved by a combination of passive shading devices, careful design of facade glass systems, a high degree of insulation and a highly detailed and balanced air flow design.

For labs, specifically those that have a high dependence of fume hoods and extraction systems, the entire operation of conditioned air, fresh air and exhaust air are carried out by interlinked and programmed VFD driven fans, that increase or decrease the fresh air intake and exhaust, depending upon the use of fume hoods and opening of their sash. 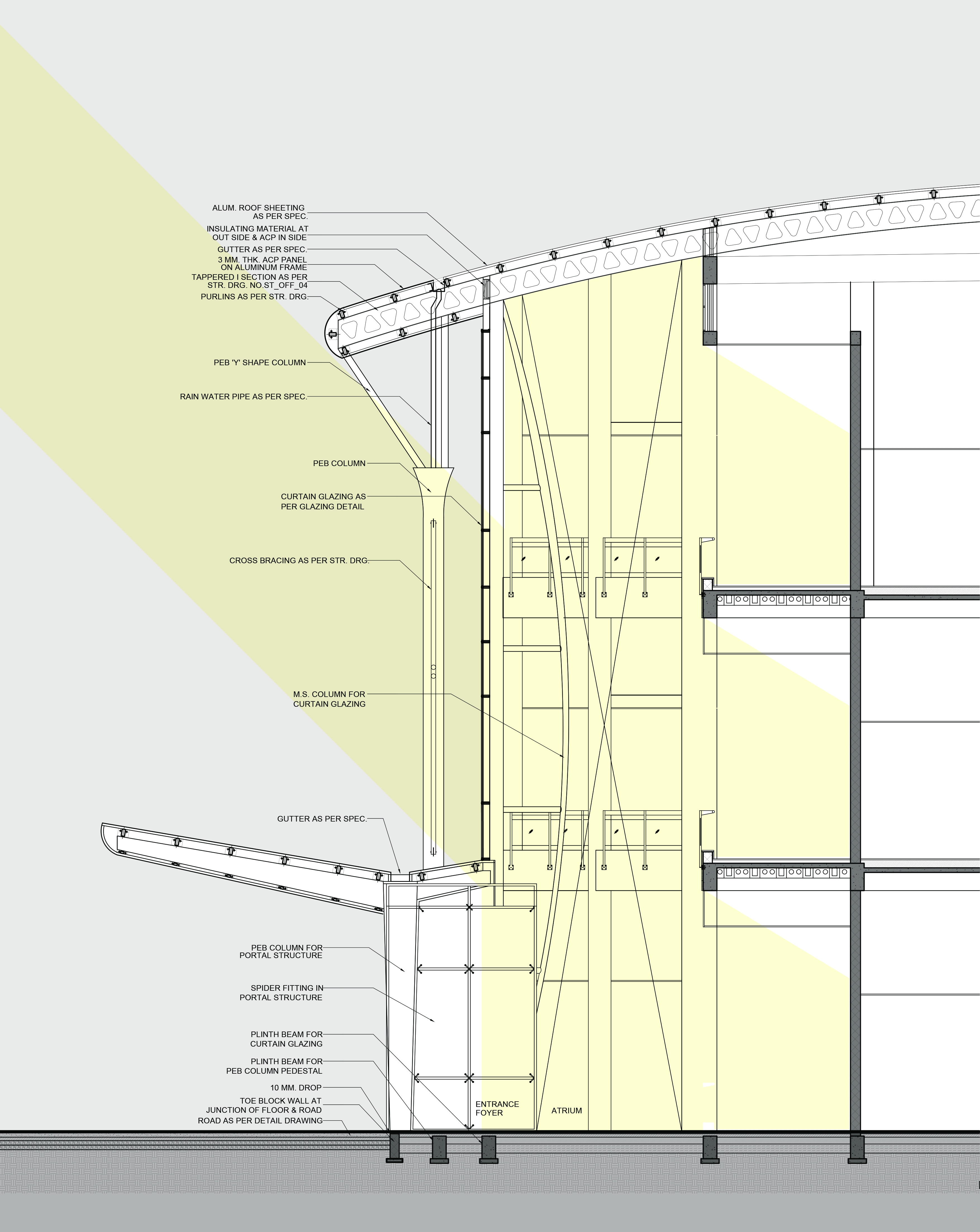 Amongst the most innovative aspects of the design is the use of RIBCORE technology from RIBS. This makes use of expanded polystyrene form works 300 mm thick, which can be used as sacrificial shuttering, and acts as insulation to the building slab.

As a result of its geometry, and integrated GI purlins encased in the system, the use of shuttering, as well as the overall thickness of floor slabs is also limited to a maximum of 75 mm as against 125 or 150 that a conventional building would have.

This has multiple benefits that include reduction in the material consumption and dead load, cost reduction, reduction in embodied energy, corresponding reduction in steel consumption in columns and foundations resulting from the gross weight reduction and high quality insulation under the deck. The EPS is covered by a layer of steel wire reinforced cement plaster, allowing the combination to have a total fire rating of 90 minutes.

The external landscape and grading follows the natural topography. No external filling of the land has been done and the entire quantum of rain water is harvested within the RIL complex harvesting system, and used for groundwater recharge as well as irrigation. All the waste is also channelled into a common STP, and the grey water is used for horticulture.

Plant species native to the coastal areas of Maharashtra are used in the landscape, to provide a better ecosystem in the green areas, without the use of excessive measures to nurture the plants.

By careful design of glazing, fenestration and angle of seating, the office areas in the lab are naturally lit. Using carefully considered lighting design, fixture selection and optimisation using lighting design software, the lighting for labs and offices has been optimised to less than 1o watt per square meter. This is keeping in view that the false ceiling height is 4.5 m and the lux level in offices and labs is 400 and 600 respectively.

The building became operational in March of 2014, and is being used for the research purpose that it was designed for.

Currently, nearly 600 scientists and associated staff work in the building, and it will become a hotbed for the harnessing of technological innovation, and the harnessing and collaboration amongst various streams of science to create better products and businesses.

Retrieved from "https://www.designingbuildings.co.uk/wiki/Reliance_Technology_Group_Research_Facility_-_A_Case_Study"
Create an article