In celebration of St Patrick's Day 2022, the ICE pulled together a list of incredible Irish civil engineering projects that have positively impacted the communities around them.

The projects mentioned below have improved the communities involved, from uniting areas that had been previously divided.to making electricity readily available in Ireland.

In no particular order: 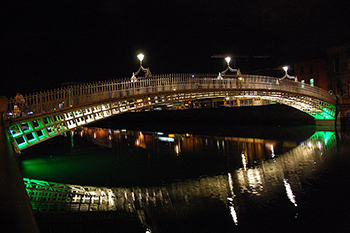 Nicknamed the Ha’penny Bridge, the official title of this Dublin landmark is the Liffey Bridge, named after the river the structure crosses.

The Ha’penny Bridge is a single elliptical iron arch rising over three metres above high water at its peak.

The pedestrian bridge was built in 1816. Before that, passenger ferries carried people across the river every day.

When city officials said ferries would require extensive repairs, ferry operator William Walsh elected for a bridge to be built instead.

The only condition was that Walsh would be entitled to a toll of a halfpenny (or ha’penny) from anyone who crossed the bridge for the next 100 years. The city honoured his request, so it wasn’t until 1919 that the turnstiles at either end of the bridge were brought down. By then, the nickname had stuck.

The bridge is made of cast iron and has remained remarkably sound since its construction, only closing for renovation for a few months in 2001. 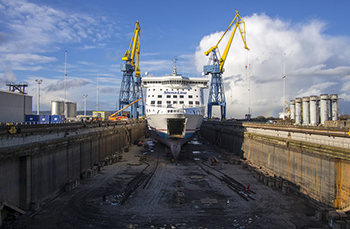 The Harland and Wolff dry dock, designed to build oil super tanker ships, opened in Belfast in 1968 after three years of construction.

Although the dock was a success in terms of construction, it never brought the financial returns that were hoped for, as the world’s ship building business had moved over to places like China and South Korea.

The dry dock is still in service today, mainly for ship maintenance.

Harland and Wolff are probably best known for having built many ships for the White Star Line – including the Titanic.

Plus, there’s a paint shop at the port that is now used as a film set. Scenes for 'Game of Thrones' were shot at the site!

The Shannon Hydro Scheme marked the beginning of the electrification of Ireland. It harnessed the power of the longest river in Ireland, River Shannon, and led to the country's Electricity Supply Board.

The scheme was the brainchild of Irish engineer Thomas McLaughlin, who worked for the German firm Siemens Schukert in Berlin.

The Shannon Hydro Scheme brought a reliable supply of electricity to much of Ireland, which sped up the country's commercial and industrial development, and improved the quality of life.

The scheme is also credited with reducing emigration, as improved national infrastructure meant businesses in Ireland could create more jobs.

At the time it was built, in 1929, the scheme was one of the largest civil engineering projects in the world and in 2002, the American Society of Civil Engineers designated the power station as an Engineering Milestone of the 20th century. 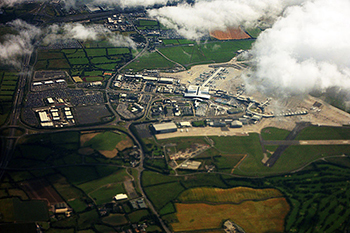 Dublin Airport opened 19 January 1940, with an inaugural Aer Lingus flight heading out to Liverpool in England.

The architect was Desmond FitzGerald, who designed a curved building with tiered floors that were meant to echo the lines of an ocean liner. Built to cater to 100,000 passengers a year, the terminal soon needed expanding. The new North Terminal opened in June 1959 and became the arrivals gate.

In 2010, the airport’s Terminal 2 and its connected boarding gate pier opened to allow more than 30 million passengers a year.

More than 400 million people have travelled through Dublin Airport since that first flight in 1940.

Dublin Airport has been formally designated as a carbon neutral airport, the first in Ireland to do so.

It followed an extensive programme of activities to reduce its carbon emissions, including the use of building management systems, the installation of LED lighting, a pilot solar farm project, and more.

This transport hub is located at the former Waterside Train Station in Derry-Londonderry, a Grade-B listed building. It became a major transport gateway in October 2019.

The hub shows the benefits of inclusive design, with the building providing a civic space where local events and classes can take place, such as choral performances and community festivities.

It was built with sustainability at heart, its business case based on whole-life costing analysis.

Sustainable practices were embedded throughout, including solar panels, a heat recovery ventilation system, and rainwater harvesting.

The project was carried out on time and on budget – thanks to some exemplary project management. 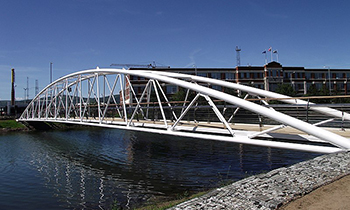 In 2013, the EastSide Partnership in Belfast – an organisation made up of local council, housing, and social care groups – won funding to develop a 9km park scheme in the Connswater area.

The scheme was then combined with works to protect against flooding as both projects involved the same river corridors.

As well as protecting 1,700 properties from flooding, the project has created a space that encourages healthier communities, enhanced river water quality and improved diversity of local wildlife.

To celebrate the Belfast-born author’s work, CS Lewis Square was created, which features seven bronze sculptures inspired by his classic children's novel ‘The Lion, the Witch and the Wardrobe’.

Nicknamed ‘Belfast’s Big Dig’, the Belfast Sewer Project aimed to improve the quality of urban life in the city by updating the Victorian wastewater system.

The previous system struggled to cope, causing flooding and pollution from sewer overflow into the river Lagan.

The upgraded infrastructure helped combat these two issues, while playing an important, if unseen, role in helping urban redevelopment in the city. With less chance of flooding, businesses are more likely to invest.

Fun fact: within that time, Jeremy Clarkson and the BBC’s ‘Top Gear’ team used the storm water tunnel to re-enact the classic underground car chase from 1969 movie ‘The Italian Job’. 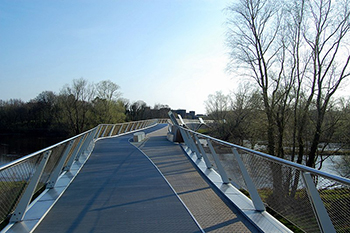 Living Bridge is a pedestrian link between the University of Limerick’s grounds on either side of the River Shannon.

The steel footbridge has a light, undulating profile and a sweeping arch that creates organic shapes that complement the unique natural setting.

The bridge was installed with wildlife conservation at heart, so it was constructed off site and then introduced across the river.

Arup oversaw construction, developing a methodology that demonstrated its efforts to minimise environmental impact, since this area supports several species protected under the EU Habitats Directive.

Arup wanted the bridge to celebrate the ‘hidden world’ of the river landscape and encourage pedestrians to appreciate their natural surroundings as they cross.

Until the 1830s, the Glens of Antrim – a region on the north-east coast of Ireland – were largely isolated from the rest of the country by a range of steep hills that rise as high as 360m.

The Commissioners of Public Works in Ireland, a government department that advised ministers, came up with the idea of building the Antrim Coast Road, hoping to generate better access to the area and reduce unemployment by creating jobs.

Civil engineer William Bald was put in charge of building the new road.

He decided to build the road at the foot of cliffs that ran by the sea. This was a revolutionary idea at the time, but it was chosen as it meant the road would be more level.

It is now regarded as one of the great tourist routes in the world. 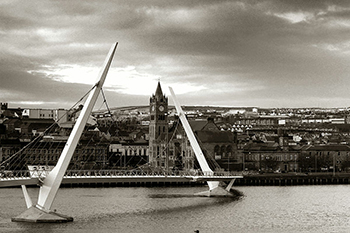 This cycle and foot bridge across the River Foyle in west Ulster is an innovative and complex structure, the first of its kind to be built in the UK.

The project brief was to design a structure to link historically divided communities on the east and west banks, both physically and metaphorically.

It was funded by the EU’s Peace III programme, which supports uniting projects like this.

It’s designed as identical halves, each suspended from a single, inclined steel pylon, which overlap at the centre of the river to form a 'structural handshake' - a powerful metaphor for reconciliation, drawing on inspiration from the nearby sculpture ‘Hands Across the Divide’ by Maurice Harron.

Peace Bridge has now become a focal point for city events as well as a valuable transport link. It even has its very own Royal Mail postage stamp! 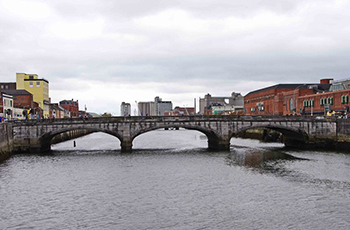 St Patrick’s Bridge is one of Cork’s most famous bridges.

The 90m long, three-span masonry arch bridge links the main street to St Patrick’s Hill and is a landmark in the city.

It recently underwent a major €1.2 million refurbishment scheme to secure its future. Funded by Transport Infrastructure Ireland, the project restored the bridge’s limestone fabric and iron features to their former glory, from when they were first built in 1861.

When the bridge opened after renovation, a formal opening ceremony took place, with Cork County Council inviting anyone named Paddy or Patricia – in any language – to join the celebration for a special commemorative photography. More than 158 people turned up!

Article first appeared on St Patricks day 17 March 2022 on the ICE community blog and was written by Ana Bottle, order of the article and images have been adjusted.

Retrieved from "https://www.designingbuildings.co.uk/wiki/Irish_infrastructure_projects"
Create an article