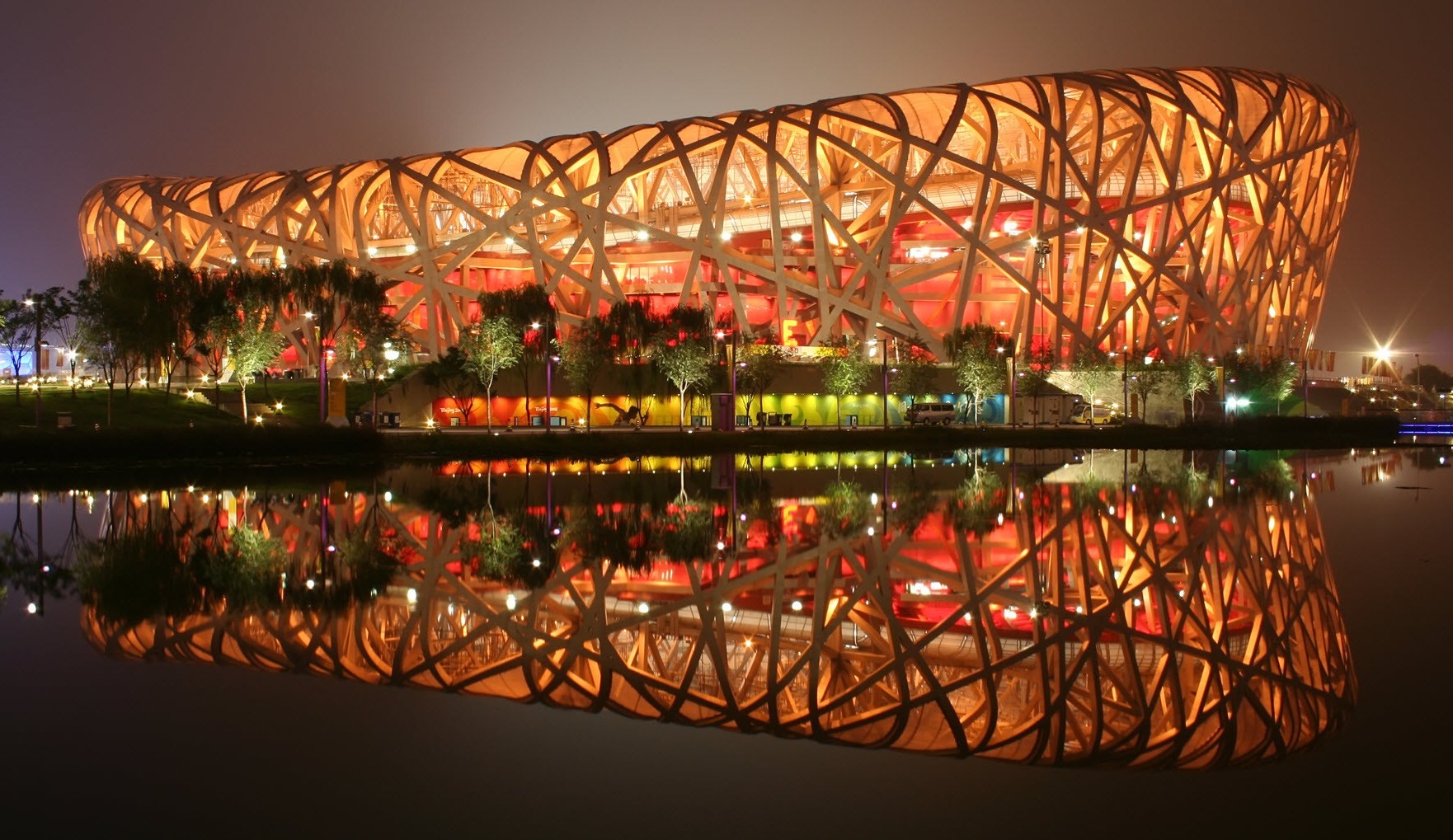 Beijing National Stadium is located at north 4th ring of Beijing city, on the south part of the Beijing Olympic Green. It was designed by the Pritzer-Prize-winning Swiss architects Jacques Herzog and Piere de Meuron, with artist consultant Ai Weiwei. It is commonly known as the Bird’s Nest.

Ten cities submitted bids to host the 2008 Summer Olympics and Paralympics, five of which made the IOC Executive Committee's shortlist. On July 13, 2001 The IOC president Juan Antonio Samaranch announced that the host city of the 2008 Olympic Games would be Beijing. It would be a national event and a symbolic showcase through which the central government of China would demonstrate to the world the country's economic achievements.

In 2002, the Beijing Municipal Planning Commission held an international competition for the design of the main stadium. As the building would host the opening and closing ceremonies, as well as the track and field events, the original competition brief included the following main criteria (Beijing Organizing Committee for the Games of the XXIX Olympiad, 2002):

The design teams invited to take part in the competition included eight teams from outside China, three joint ventures and two Chinese design institutes (Xuefei R. 2008pages 175-1 90). All 13 competition schemes were displayed at the Beijing Exhibition Centre in March 2003, attracting thousands of visitors. At the end of the exhibition, it was announced that the Bird’s Nest scheme had been selected, both by the jury and by public voting (Tony C 2009, P5-P8).

The winning design emphasised the pure shape of the stadium, with its interwoven grid-like structures producing a dramatic visual effect. The BMPC praised the design commenting that '…the pure, simple and powerful building shape blends all into a harmonious whole, and the entire building gives a strong sense of dynamics and vigor." (Beijing Municipal Planning Commission. 2004)

At the time the architectural competition for the Beijing National Stadium was announced, Herzog & de Meuron and ArupSport (Arup's multidisciplinary practice specialising in sports architecture) were already working together on the Allianz Arena in Munich. This successful creative partnership was based on a shared desire to innovate, Herzog & de Meuron creating unique buildings with strong local cultural context, and Arup designing stadiums that would perform for spectators, athletes, and operators.

“To understand just how important the Beijing Olympics are to China, you have only to look at where the Olympic Green has been built. " (Architectural Influence, 2009). The National Stadium is located in the southern part of the Olympic Green, masterplanned by Sasaki Associates and covers an area on the north side of Beijing close to the city's central axis.

The Stadium is the centrepiece of the Olympic Green, on an irregular quadrangle of approximately 20.4ha. As the Aurp Journal stated, the terrain is relatively flat, with ground elevations ranging from 42m to 47m, highest at the south-west corner and lowest at the north-east corner. The position was chosen so that there would be a gradual rise in level from the city roads in the north-east, forming a gentle slope up to the stadium plinth. The plinth connects to the main concourse, level 1 of the stadium. (The Aurp Journal, 2009)

Though the Beijing National Stadium is often known as the Bird’s Nest, the original inspiration was actually from a combination of local Chinese art forms - the crackle glazed pottery that is local to Beijing, and the heavily veined Chinese scholar stones. However when the artist Ai WeiWel first saw the proposal he quickly drew a bird in a tree. A ‘panelised’ approach gave way to infinite lines of structure and the name Birds Nest quickly became synonymous with the project.

Like most modern stadia, the Bird's Nest was designed 'inside out', beginning with the competitive field in the centre and then the seating stands around it for 91,000 spectators, designed to promote an exciting atmosphere that would spur athletes on to deliver top performances. The tiered seating is arranged with as few gaps as possible to preserve a homogeneous impression. The distinctive lines of the underside of the roof are concealed behind acoustic panels so that spectators can concentrate on the competitive field.

“Every game has its own thrilling 'I was there' moments, when athletes perform miracles and new records are set. The team wanted to create a stadium that would harness and amplify this excitement in the way the world's best loved venues do." (J Parrish. 2009, p8-plO) The architects' ambition was to create not only an instantly recognisable symbol of China's culture, but also the most exciting stadium in Olympic history. The form of the bowl and the distribution of seating largely determine the other design aspects of the stadium, including the shape and structure of the roof, the levels and locations of the concourses and premium facilities, and the amount of natural light and ventilation reaching the competitive field. The team worked closely with the international Olympic and local organising committees to streamline and rationalise the on-field facilities. The result is a more compact bowl with less distance between the spectators and the track.

A skilful balancing of several key criteria is involved in this project. Most importantly, spectators want to be as close as possible to the action and to have a good view of the field, while the stadium developer needs to accommodate a certain number of seats within a defined budget. These requirements often conflict, and as Parrish said, 'Even a tiny adjustment to the configuration of the seats can have a huge impact on the overall design and cost of the building'.

Creating a stadium that will be both an athletic and a soccer venue is always a challenge, '…Athletics fields are bigger than football pitches, which means that spectators in the stands are further away from the action. Consequently, people in the upper tiers may not be able to see the ball on the pitch, and the atmosphere - which is so important to a soccer crowd - may be seriously diluted"

By using powerful software, designers can quickly generate the initial form of a stadium within defined parameters such as geometric constraints, environmental criteria, and the limitations of construction materials. Having produced the initial concept, the architect can quickly explore and test options by adjusting variables such as the height of a row of seats.

The Architects used their own specialist parametric modelling software to develop a bowl geometry optimised for Olympic athletics that would also work well for soccer in legacy mode. The team produced 33 versions of the design to fine-tune the form of the bowl. They decided that this landmark stadium should have the same distinctive external form in both Olympic and legacy modes, and so the temporary additional seating needed to be accommodated within the main envelope. The temporary seats, which are mainly to the rear of the top tier, have the least-favourable views and are located in zones that can be converted to other revenue- generating use in the legacy mode.

The stadium has a gross volume of three million cubic metres and is considered to be the world's largest enclosed space (Arup journal).

The bowl and external form of the Stadium were developed in parallel, with Herzog & de Meuron working on the façade and roof while Arup defined the size of the bowl and proposed an optimised roof structure. The load-bearing frame for the stadium looks chaotic without any hierarchy of structure, but it is in fact very rigorously designed. There are 24 portal girders aligned in a very regular pattern. This primary structure is divided at irregular intervals by secondary structures. The Arup journal (1/2009) states that: the seemingly accidental arrangement of steel members that forms the envelope makes it almost impossible to distinguish between the primary structural elements supporting the roof, the secondary staircase structures, and the tertiary elements that add to the random effect.

The roof structure spans a 313m x 266m space, closely enveloping the bowl and concourses to form both façade and roof, The façade incorporates the stadiums main staircases. The result is a compact and sinuous external form uninterrupted by masts, arches or stair cores. While the façade is open, a roof covering made of single-layer ETFE membranes stretched between the steelwork sections protects the spectators from wind and rain.

The steel structure is painted light grey, contrasting with the red-painted external concrete wall of the bowl, which is clearly visible through the façade. This creates a variety of impressive visual effects, particularly when lit at night.

The Bird’s Nest was described in the Times of London as “the world's most conic building in this decade of iconic buildings". It now operates as a major tourist attraction and serves as the centre of international and domestic sports competition and recreation activities.

To contribute to a discussion about this article, click 'Add a comment' above and add your thoughts to this discussion page.

It is a great and unique stadium. It has been opened as a great tourist attraction. And also serving as the centre of international or domestic sports competition and recreation activities. More Photos: http://www.worldfortravel.com/2013/06/14/beijing-birds-nest-stadium-china/%7Chttp://www.worldfortravel.com/2013/06/14/beijing-birds-nest-stadium-china/. - Jenna