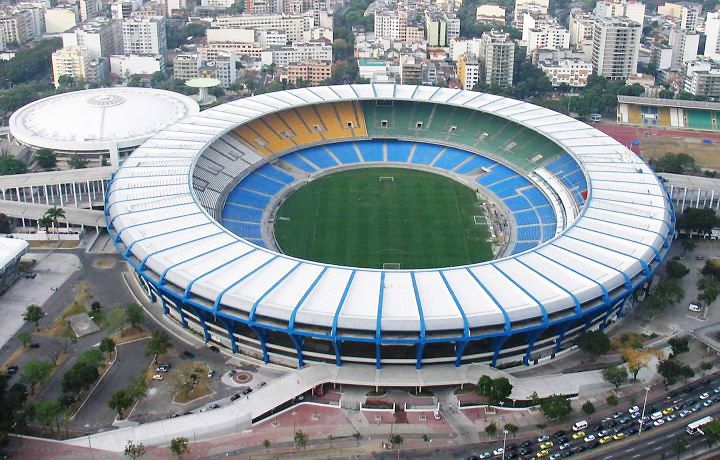 The Estadio Jornalista Mario Filho, or Maracana Stadium as it is more commonly known, is a football stadium in Rio de Janeiro, Brazil.

Upon completion in 1950, it was the world’s largest stadium by capacity, with 199,854 attending – legally and illegally – the final between Brazil and Uruguay.

Since then it has been a prominent venue for club and international football, and has also hosted other sporting events and music concerts.

The stadium will be the venue for the opening and closing ceremonies of the 2016 Summer Olympics and Paralympics. 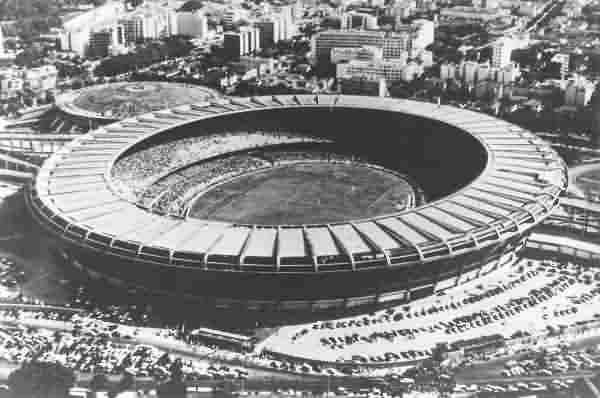 Construction work began on the stadium in August 1948, with a little under two years before the first World Cup game was due to be played. Work quickly fell behind the tight schedule, meaning that a work force of 1,500 had to be employed, with an additional 2,000 in the final months, to be ready on time.

The stadium is characterised by its elliptical framework which is almost circular, and the maximum height is only 24 m (78 ft). Two large rings of tiers run round the entire stadium divided by medium-sized open boxes, with a cantilevered roof spanning 30 m covering the rows at the rear of the stadium.

It was built using solid and reinforced concrete. The façade of the elliptical perimeter incorporates 60 large Y-shaped pillars that sustain the supporting beams.

Despite the stadium having come into use in 1950, the construction was only fully completed in 1965. It was not only considered one of the most luxurious stadiums in the world, but was also commended for its functionality and security. Two large external flights connect the stadium’s upper tiers with the surrounding park, enabling a fast evacuation time.

During a football match in July 1992, an upper stand collapsed, killing 3 spectators and injuring 50 others. Following this disaster, it was converted to an all-seater stadium, greatly reducing the capacity. Around the same time, it was classified as a national landmark and saved from possible demolition.

The stadium underwent renovations between 2005 and 2006, which increased its all-seated capacity to 87,000, making it the largest stadium in Brazil.

With the 2014 World Cup and 2016 Olympics approaching, a major reconstruction project was started in 2010. Analysis of the existing structure revealed that the cantilevered concrete roof had become functionally inadequate and lacked sufficient structural safety.

The roof was removed and the original two-tier seating bowl demolished, to be replaced with a one-tier configuration. The original reinforced concrete columns of the old bowl were retained and used to support a new lightweight roof structure that was designed as a spoked wheel laid horizontally.

The roof covering is a fibreglass-tensioned membrane coated with polytetrafluoroethylene (PTFE). The surface is stabilised using additional radial filet cables, which also ensure adequate water drainage. The membrane sections have a gently-curved deltoid shape, and emphasise the deliberately cautious intervention into the existing concrete structure.

Whereas the original roof had only covered the rear spectators, the new roof covered 95% of the seats. The roof is also fitted with 1,500 photovoltaic solar modules to produce solar energy.

Just six months on from the 2016 Games, concern was raised by the Rio de Janeiro Football Federation about the deteriorating state of the Maracana, as well as a number of other venues purpose-built for the Olympics in Rio.

As no one took over responsibility for the up-keep of the stadium after the closing ceremony, reports have surfaced of the rapid disrepair of the stadium. Worms have damaged the threadbare playing surface, internal windows have been smashed, copper wire stolen from walls and ceilings.

In addition, due to general looting, around 10% of the 78,000 seats have been torn up. Looters have also stolen fire extinguishers, hoses, televisions and even a bronze bust of Mario Filho, the journalist after whom the stadium was named.

In late-January 2017, Light, a local electric utility company, cut off the stadium's power due to unpaid bills, which they claim are in the region of 3 million reals (US$940,000).

Retrieved from "https://www.designingbuildings.co.uk/wiki/Maracana_Stadium"
Create an article