Latest technologies, including virtual reality, are revolutionising the way buildings are conceived, constructed and maintained.

“It’s like the moment when people switched from fax to e-mail or from buying CDs to downloading music,” says Andrew Pryke, managing director of BAM Design. “Construction is going through a step-change, but it’s also a leap of faith. Companies will have to adapt or go out of business.”

The sector is changing fast. Advancements in virtual reality, digital fabrication and the internet of things will continue to be major disruptors. But Pryke is also referring to the impact of mobile devices on the way we live.

Technology is driving behavioural change across populations. This has profound implications for the future design of buildings and cities, and the companies that build them.

[edit] Paving the way for innovation

“Our physical world is increasingly merging with the virtual world. How we, as human beings, understand and facilitate that is where the excitement lies,” says Atkins director Anne Kemp.

Building Information Modelling (BIM) is providing an important platform for this built environment revolution. For every physical structure, a digital twin is created. When this virtual model intersects with other disciplines, such as data analytics, new possibilities for innovation proliferate. Thanks to the plunging price of technology in the form of low-cost sensors and affordable mobile devices, the pace of innovation is accelerating. 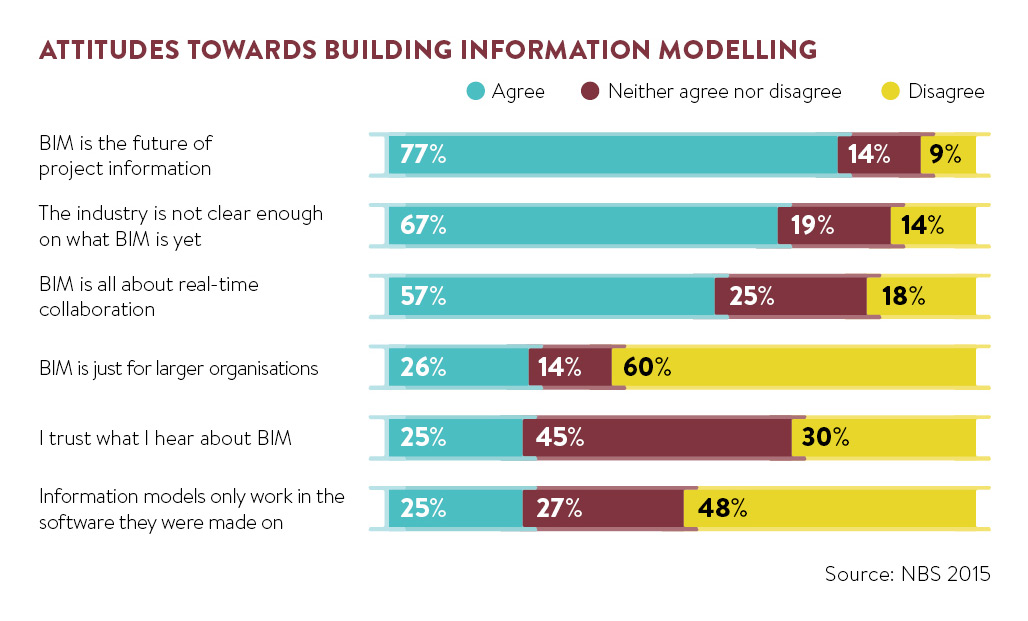 The effects are being felt as much on-site as in the office. Over the past six years, Bechtel has been collaborating with Silicon Valley developers to create more than 50 tablet-based apps. One example is an app that interacts with sensors embedded in wet concrete, providing accurate readings of the concrete cure rate.

The company is even trialling the use of sensors on workers and equipment to monitor productivity via its BIM model.

“We’re tracking the movements of workers in real time, and then using analytics and big data to get an in-depth understanding of productivity rates,” says Mr Smith, adding reassuringly: “But we’re following the movements of the crowd, not individuals.”

Until recently, industry conversation about digital construction has tended to focus on the benefits for project teams. But as construction typically accounts for just 10% of whole-life cost, clients are now eyeing a greater prize – the value that an accurate data-rich BIM model can bring to an asset throughout its operation.

“Our facilities maintenance (FM) teams have been working from advanced BIM models on five buildings in Camden. Over the last two years, they’ve demonstrated a 50% saving in call-out costs,” says Pryke.

This is simply down to engineers accessing information before they visit a site. Instead of looking at paper drawings, or trying to remove panels or ceiling tiles to locate elements, they tap into a 3D model via a tablet. Stripping back virtual building layers, the engineers pinpoint precisely where objects, such as ventilation units, are located. Information on the service history and spare parts can be instantly downloaded.

The strategy is enabling BAM Design’s FM team to shave up to 30 minutes from every call-out. But this is just the beginning for Pryke. He predicts that FM teams could soon be using 3D printers to download and print spare parts from BIM models on demand.

So, what happens when you scale up an advanced BIM model to cover a wider area? You have the beginnings of a smart city, according to Pryke.

BAM Design is in the process of creating a digital model for a commercial district in London that encompasses fifty buildings and ten public spaces. The area contains a mix of old and new developments. Older structures are being gradually retrofitted with BIM through techniques such as laser scanning. 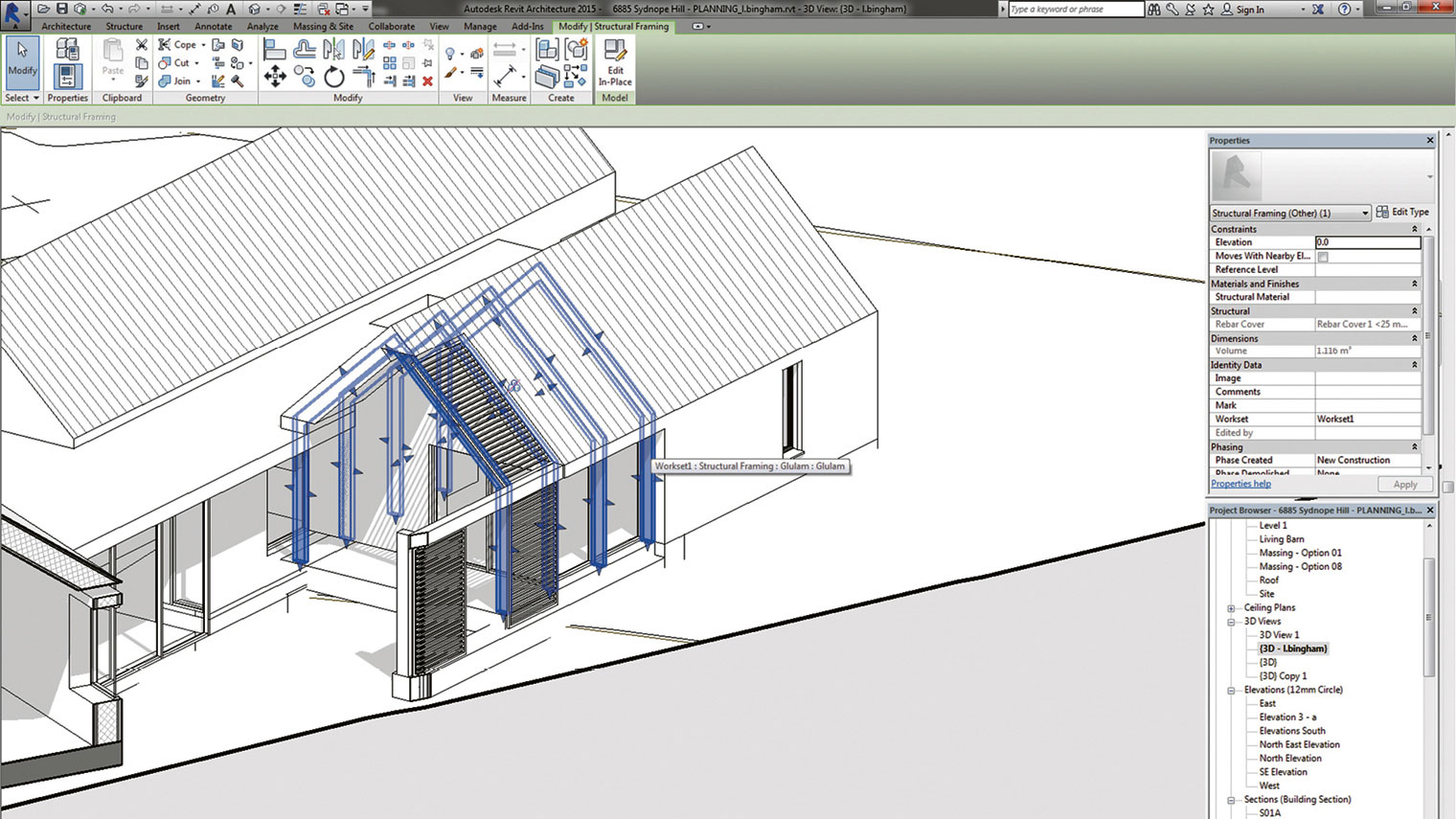 Pryke believes that the model will bring benefits both to landlords and visitors. At client level, it provides a holistic overview of the property portfolio. The performance of buildings can be benchmarked and compared, leading to more sophisticated maintenance strategies.

He adds that analysing data from mobiles and sensors in the context of the digital model can also help a client reach a deeper understanding of the area’s social and economic success. Property owners can investigate how visitors move through the streets, tracking footfall and identifying obstructions to free movement.

Ultimately, Pryke hopes that a simplified version of the BIM model could be accessible to the general public via a mobile app. This could guide visitors through the area, picking up alerts and suggestions from nearby shops and facilities via Bluetooth low-energy beacons. It could, he argues, be a powerful means of helping businesses connect with consumers and landlords strengthen their relationship with tenants.

Although light years away from a contractor’s traditional activities, this illustrates how technology is helping the industry become less project centric and more outward looking, shifting focus to the long-term needs of the client and end-user.

Using technology to help the flow of both people and vehicles around the built environment is also a major focus for Atkins.

“The way we’re already using our phones to navigate around streets, the data coming on to our phone is not only informing us, but also influencing and controlling us. As a company we’re thinking about what that means now,” says Kemp. “But we’re not only identifying data that can help people move around their environments, we’re also finding out how to do that in an intelligent, informed and safe way to keep people secure.”

At a macro level, this involves modelling major transport arteries. Atkins is working on three smart motorway schemes for Highways England, undertaking design activities on the M6, M20 and M23.

From the rise of steam, which led to railways, or electricity which brought the elevator and skyscrapers, technology has always changed the way cities work

In addition to increasing the capacity of the physical infrastructure, the strategy also involves developing smart signage, getting real-time information to drivers to help them make decisions about their journey.

“At the other end of the scale, we’re following some exciting research that is investigating how social media can influence the movements of crowds of people after events such as football matches, reducing disruption to people nearby,” Kemp adds.

Dan Hill, associate director of Arup’s digital team, argues that technology has even more influence on our cities than planners or architects.

“From the rise of steam, which led to railways, or electricity which brought the elevator and skyscrapers, technology has always changed the way cities work; we’re not thinking coherently enough about that as an industry,” he says.

Hill predicts that a range of trends, including face recognition software, driverless cars and mobile payment mechanisms, could lead to radical re-modelling of spaces such as transport hubs.

“We could speculate that, over the next ten years, railway stations won’t need ticket barriers, because the transaction would happen in a different way. This could transform their interior design, removing pinch-points. The movement of passengers would become much more fluid,” he says.

He also predicts that digital design and fabrication tools could empower communities to become more involved with regeneration projects, creating flexible buildings that can be easily adapted according to need.

“All these trends are leading to a lighter, adaptable, fleet-of-foot building industry,” Hill concludes. “Digital designers will increasingly have a stewardship role, looking at what’s working and what isn’t, and constantly refining and adjusting what they do. It’s a very different kind of engagement – much more sensitive, subtle and human centred.”

This article was written by Emma Crates, Regular contributor to The Construction Index and former features editor of Construction News.

Retrieved from "https://www.designingbuildings.co.uk/wiki/Virtual_reality_and_big_data_disrupting_digital_construction"
Create an article